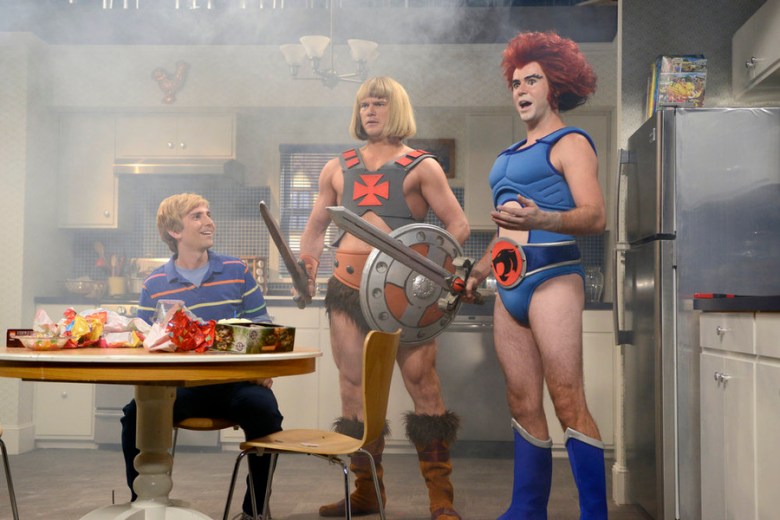 “Saturday Night Live” returned this past weekend for its 40th season with host Chris Pratt and musical guest Ariana Grande. As with nearly every season premiere of the stalwart sketch comedy series, the Season 40 opener was proceeded by months of discussions regarding the show’s casting changes, heightened this year by the mass exodus of Season 39 cast members John Milhiser, Noel Wells, Brooks Wheelan and Mike O’Brian (who has since returned to the writers’ room). Additionally, the quirky Nasim Pedrad left the building for the Lorne Michaels-produced FOX comedy “Mulaney,” “SNL” alumni Darrell Hammond replaced the late Don Pardo as announcer and Weekend Update has been totally revamped with a new look and a new co-anchor in Michael Che of “The Daily Show.”

With so many changes, can “SNL” continue to improve? Unfortunately, that question remains to be seen after the mediocre premiere, which saw the lovable Pratt, still beaming after “Guardians of the Galaxy” dominated the summer box office, in unusually nervous form. Given his comedy chops on “Parks and Recreation,” it was a bit of a disappointment to see Pratt so stiff in his “SNL” debut — yet, as always, certain cast members rose to the occasion despite a lackluster start. Here are “SNL’s” MVPs of the Season 40 premiere.

READ MORE: How Not to Get Fired from ‘Saturday Night Live’

Who would have thought the 20-year-old and only new cast member would steal the night from not only Pratt but also venerable cast members such as Taran Killam and Kate McKinnon? After the fresh-faced Davidson made his grand debut with a hilarious Weekend Update takedown of homophobia, social media ignited and a potential new “SNL” star was born. With the nasally vocal delivery of Jerry Seinfeld and the goofy, boyish charm of Andy Samberg, Davidson was an absolute riot as he slyly roasted all the panicky, oblivious straight males who have ever taken a dig at homosexuality.

“SNL” has continuously struggled over the years to pass the comedy torch down to younger comedians (just look at all the fresh faces axed from last season), but Davidson, a fixture of MTV’s “Guy Code” and “Wild ‘n Out,” could be just what the show has been looking for: a youthful new comedic voice who can bring in the key teenage demographic while more than holding his own against veteran cast members. Here’s hoping Davidson continues to grow week by week.

Given his infectious high energy and handsome appearance (just look at those thighs in this sketch), Taran Killam has rightfully emerged in recent seasons as “SNL’s” male star. The premiere wasn’t necessarily the best showcase for Killam (he was stuck playing the straight man in “Video Games” and didn’t get nearly as bonkers as we know he can in the advertisement parody “Cialis Turnt”), but he more than delivered when it came time to bringing Thundercat favorite Lion-O to life in the wackily absurd “He Man and Lion-O” sketch. “SNL” is known for taking on some pretty ridiculous ideas, but this R-rated “Toy Story” was memorably odd and unusually racy given its penis-patting punchline.

If the premiere proved anything, it’s that “SNL’s” biggest problem lies deep within the writers’ room and that, more often than not, it’s entirely left up to the cast to elevate some pretty awful sketch material. Case in point: “Booty Rap.” Although the comedy bit had a promising setup — an awkward pair meet at a bar and use humorously-timed rap music to express their feelings to one another – its five-minute runtime stretched the joke way too thin.

And yet, it’s impossible to deny the side-splitting swagger of Aidy Bryant, who rattles off the phrase “My ass!” over and over again with so much nutty cockiness that she even gives Nicki Minaj a run for her money. Sure, Bryant’s hip gyrations and faux bad girl persona keep the laughs coming, but it’s really the way she can effortlessly switch from shy loner to busty flirt in a matter of seconds that makes her comic timing so indelible (see “Cialis Turnt” or “He-Man and Lion-O” above for more examples, especially Bryant’s sensual final line in the latter, “You may have blown out the candle, but momma’s wish done come true.”).

Cecily Strong (“Weekend Update: The Girl You Wish You Hadn’t Started a Conversation With at a Party”)

Perhaps the season premiere’s smartest move was reintroducing Cecily Strong’s bratty Girl You Wish You Hadn’t Started a Conversation With at a Party. When it was announced in late August that Strong would not be returning to Weekend Update, many fans were left puzzled not only because Strong had a self-aware news delivery that made the show’s central sketch a delight, but also because she represented a consistency-bridge between Seth Meyers and Colin Jost, a late anchor addition last season who has yet to make a strong impression. Now that Weekend Update has a brand new stage design and co-anchor in Michael Che, bringing back Strong’s fan favorite Girl was a wise choice in making the new Weekend Update tie into the show’s rapidly changing history as smoothly as possible.

Luckily, none of Strong’s snotty slurs or hyperbolic eye rolls have lost their comedic bite in the year since we last saw her as a guest on Weekend Update. Using Ebola as the hook to reintroduce the character worked well, especially since Girl has a knack for jumping around important topics faster than a speeding bullet, and commenting on Jost as “looking like my ex-boyfriend” was a nice meta punchline that sharply addressed the big elephant in the room. Now that Strong is freed from the Weekend Update desk, hopefully she has more opportunities to bring singular creations like Girl to the show’s forefront.

It’s never easy joining the cast of “Saturday Night Live,” especially in the season premiere when nerves are at a high, but Michael Che’s Weekend Update was unfortunately middling given his boring news delivery and verbal slip-ups. It’s never a good sign when you’re fumbling lines in your very first joke, let alone slowing the entire night down by rattling them off with a dragging pace. It didn’t do Che any favors that co-host Colin Jost has yet to establish himself as a comedic voice on the show, or that the entire Weekend Update presentation has been redesigned, for both of these made Che stick out even more as a sore thumb.

Worse yet, the ex-“Daily Show” correspondent got upstaged by Davidson (see above) in the very sketch that Che is supposed to command. Ouch! Of course Che gets a pass given this was his debut, and he certainly has room to grow and is proven capable of skewering the news given his time with Jon Stewart, but in order to make a name for himself he has to up his confidence behind the desk, bring a particular style to his anchor persona and figure out a banter with Jost that paints both of them in a funnier light. This inaugural test run may have been a failure, but it’s certainly not a death wish. All eyes will most likely be on Che as the season continues.