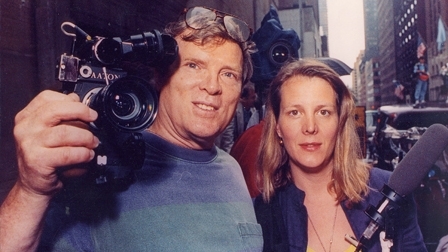 The Lifetime Achievement Awards are to be presented to Albert Maysles and partners D.A. Pennebaker & Chris Hegedus. Maysles and Pennebaker worked together on Robert Drew’s 1960 documentary “Primary.” In addition to making several highly praised music documentaries, Pennebaker and his wife, Hegedus have joined forces to produce documentaries such as “Kings of Pastry” (2010), The War Room” (1993) and “Town Bloody Hall” (1979).

READ MORE: How To Measure Your Documentary’s Impact & Make It Count

The tribute event’s host committee is made up of more than 40 documentary veterans, including Oscar-winning filmmakers Michael Moore, Barbara Kopple, Alex Gibney and Deborah Shaffer.

Two additional categories were also announced: The Robert and Anne Drew Award for Documentary Excellence and the Leading Light Award. The Robert and Anne Drew Award comes with a $5,000 reward for a mid-career filmmaker distinguished in observational cinema. The recipient will be announced in late October. The award is sponsored by Drew Associates, the company started up by the late Robert Drew, later joined by his wife Anne Gilbert, who passed away in 2012. They were were filmmaking partners and spouses. Drew is known to have established the American cinema vérité documentary style.

Dan Cogan, executive director and co-founder of of Impact Partners, is to receive the Leading Light Award for making a crucial contribution to the documentary world in a role other than filmmaker. Impact Partners is a finance group dedicated to helping fund documentaries centric around social issues.

In addition to the awards, DOC NYC will launch Docs Redux, a new screening section at the IFC Center, focusing on classic documentary films.

“As the year comes to a close, we’re assembling the country’s leading nonfiction filmmakers to pay tribute to great visionaries in our field,” said Thom Powers, DOC NYC artistic director, who took part in leading the festival program team in selecting this year’s nominees.

DOC NYC is America’s largest documentary film festival and will take place this year from November 13-20.