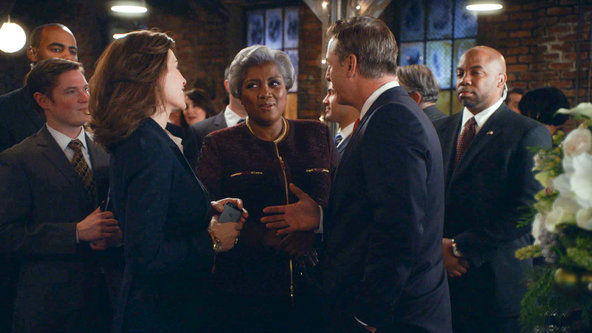 BuzzFeed’s exploration of why the New York Times can’t seem to hire good TV critics labeled Mike Hale “the one who gets it right,” but his review of “Trust Issues,” Sunday night’s episode of “The Good Wife” isn’t the best argument in his favor. First, the New York Post’s Elizabeth Vincentelli took Hale to task for arguing that the show”works best — really, it works only — when you can root unreservedly for Alicia Florrick and her firm.” “Oh no,” she cried in mock horror, “not a TV show exploring moral ambiguity!”

Now, longtime Democratic strategist Donna Brazile has taken issue with Hale’s contention that “The Good Wife’s” casting of real-life politcos in onscreen cameos — like Obama advisor Valerie Jarrett, who in “Trust Issues” served as Eli Gold’s proxy in urging Alicia Florrick to run for State’s Attorney — is “a distraction.” “They probably succeed as fan service for a liberal audience of a certain age,” Hale wrote. “But they don’t work as television drama.”

Brazile, who’s appeared as herself on “The Good Wife” three times, begs to differ:

On every show that I have been on, I have played myself. How badly could I botch that? I can understand people complaining if I was playing Rand Paul or something. But when I play myself, all I have to do is be myself — and resist the temptation to tell the director “That’s not what I would say.” If a critic doesn’t think I can act, it’s because I’m not acting. That’s me — and that’s the way I act.

For me, “The Good Wife’s” political cameos don’t detract from the show: Brazile and Jarrett aren’t famous enough figures that their real-life narratives disrupt the episode’s story, and they’re willing to allow the screen versions of themselves to say or do things that might be construed as unlikable or ill-advised. They do, inevitably, shift the tone of the scenes they’re in, but on a show that’s concerned with women’s increasing power as political actors, they also serve as an important reminder of how that battle is waged in the real world.

One issue seems to be that “The Good Wife,” which Hale calls a “high-gloss fantasy,” isn’t Important enough to bear the weight of Brazile, et al.’s appearances; would he say the same of Brazile’s appearance on “House of Cards,” a show which, despite its pretensions to gloom and grit seems far more like a fantasy, albeit a malign one, than “The Good Wife”? “Trust Issues” was a bit of a scramble — the running gag with Danny Hoch as a frequently shirtless inhabitant of Florrick Agos’ building didn’t work at all — but it’s clear (maybe too much so) that the chaos was part of the point. “The Good Wife” is not a show where good is always rewarded and evil punished: In fact, I’ve never seen a depiction of the legal process so straightforward about how little rightness has to do with who wins or loses a legal case — or at least one that can make that point without sliding into Darwinian cynicism. High-gloss notwithstanding, that’s the opposite of fantasy.

This Article is related to: Television and tagged Julianna Margulies, The Good Wife