'Fury' Reviews: What Is It Good For? Absolutely Nothin' 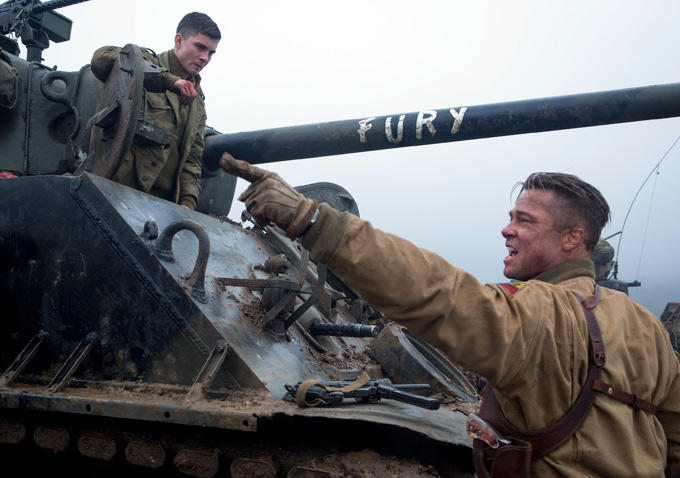 Brad Pitt already won the war in “Inglourious Basterds,” but apparently he felt he should take another crack at it, this time in a more “serious” war drama. Hence, “Fury,” the new David Ayer-directed film starring Pitt alongside Logan Lerman, Jon Bernthal, Michael Pena and Shia “I pulled out a tooth and cut my own face for this movie” LaBeouf. Oscar prognosticators have been gauging the film’s shot at gold from the beginning of the year, and with the first reviews, the answer seems to be a resounding “nope.”

Even putting those predictions aside, critics aren’t too impressed. The kindest reviews have called it a perfectly solid B-movie with A-movie pretensions (without matching the power of, say, Sam Fuller’s “The Big Red One”). The harsher reviews have called it comically self-serious and disturbingly jingoistic. Both sides seem to agree that it’s pretty familiar stuff, and that the strong cast is sometimes underserved by Ayer’s script, which emphasizes mood and violence over character. Pitt’s probably going to have to hope “Selma,” the Ava DuVernay-directed Martin Luther King, Jr. film he produced, does better, or he’ll probably just have to cheer Angelina on for “Unbroken.”

In the end it’s a contest for underdog status, and Brad Pitt’s men seem destined for their own self-conscious Alamo or Little Bighorn showdown in the German countryside, even though it’s technically the Germans who are having their General Custer moment. Ayer gives his movie a fervour and energy which takes it beyond a videogame. But only just. Read more.

Too solemn and unimaginative to be interesting, Fury is itself a lumbering tank of a movie, chunky, loud, and clumsy, mulching down men into meat as proof of its dramatic seriousness and gloomy worldview. This is less a record of battlefield verisimilitude than an inflated cartoon of masculinity in action, and its apparent anti-war message is complicated by its blind valorization of warriors, imagined as tortured souls simply doing their jobs. Read more.

Not only did the standoff depicted in “Fury” never happen, but it will likely be long gone from moviegoers’ memories six months from now, after Sony’s marketing blows over and people go back to watching “Inglourious Basterds” — the other, better pulp World War II movie featuring Brad Pitt as a heavily scarred, slow-drawling Nazi hunter. Read more.

Thankfully, Ayer’s cast put enough care into the proceedings that they elevate what’s often humdrum about the storytelling. In the past few years, Pitt has aged into an effortless leading man less swayed by brooding heroism than reconciled gravitas. His Wardaddy isn’t meant to be flashy or even exactly memorable: He’s just one more skilled cog in a killing machine, and Pitt honours the man’s compelling anonymity. Read more.

It’s all staged effectively, with real impact, and were this two-hour-plus film 40-minutes shorter, acting as a lean and mean action flick against the backdrop of the war, Ayer may have had something close to B-movie perfection. But his desire to strive for deeper meaning outweigh his ability in “Fury.” Read more.

But the extraordinary visuals never develop a substantial takeaway, and neither do the characters: During a prolonged dinner-table sequence that finds Pitt and Lerman spending a few gentler moments with surviving German women in a bombed-out town, Ayer goes great lengths to demonstrate the challenge of finding solace in the midst of a terribly ugly situation. The sequence holds potential, but goes on far too long, as if begging to be taken seriously. And that’s the problem with “Fury” as a whole: Every thematic possibility is addressed in the broadest strokes. Read more.

“Fury” is a good, solid World War II movie, nothing more and nothing less. Rugged, macho, violent and with a story sufficiently unusual to grab and hold interest, it’s a modern version of the sort of movie Hollywood turned out practically every week back in the 1940s and 1950s. Today, and because it stars Brad Pitt in what deserves to stand as an emblematic performance, it seems like a bigger deal, and the film’s mild case of pretentiousness in the climactic stretch is its one notable problem. Read more.

I’ll say this about FURY: it is the most bloody & gruesome film not marketed as splatter horror. Warn your parents.

FURY is terrible. remember how Sherman said “The crueler war is, the sooner it will be over?”

If only the same were true of war movies.

Fury: like being kicked down a hill in a dustbin, in a good way. Powerful, thunderous, blood-rushing stuff in the Fuller/Peckinpah style.

“Fury’s” score was sadly, badly overbearing. This should have been a more “show don’t tell” movie. Battle scenes were fantastic.