In the 'Interstellar' Universe, the Apollo Missions Were a Hoax and 7 More Highlights from TIME 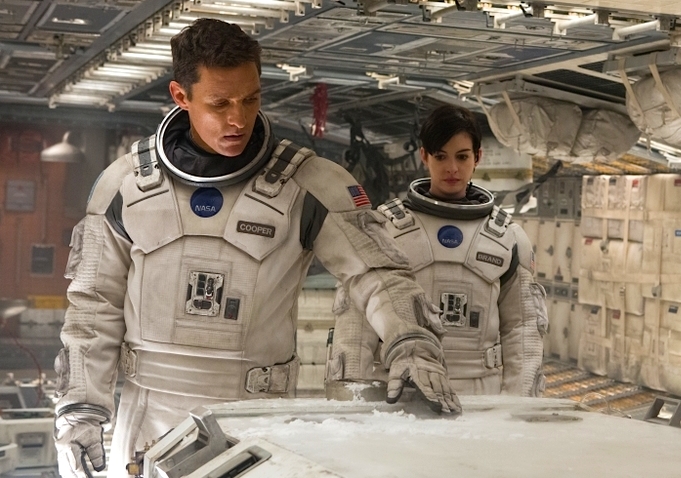 Time senior writer Jeffrey Kluger is no stranger to outer space stories. He is the co-author of “Lost Moon: The Perilous Voyage of Apollo 13,” the book that would become the basis for Ron Howard’s 1995 drama “Apollo 13,” starring Tom Hanks.

Naturally then, Kruger was the perfect person to sit down with “Interstellar” director Christopher Nolan and the film’s top notch cast, Matthew McConaughey, Anne Hathaway and Jessica Chastain, to discuss the sci-fi saga, which opens next week. Check out the cover, an exclusive clip and some highlights form the piece below, courtesy of TIME. 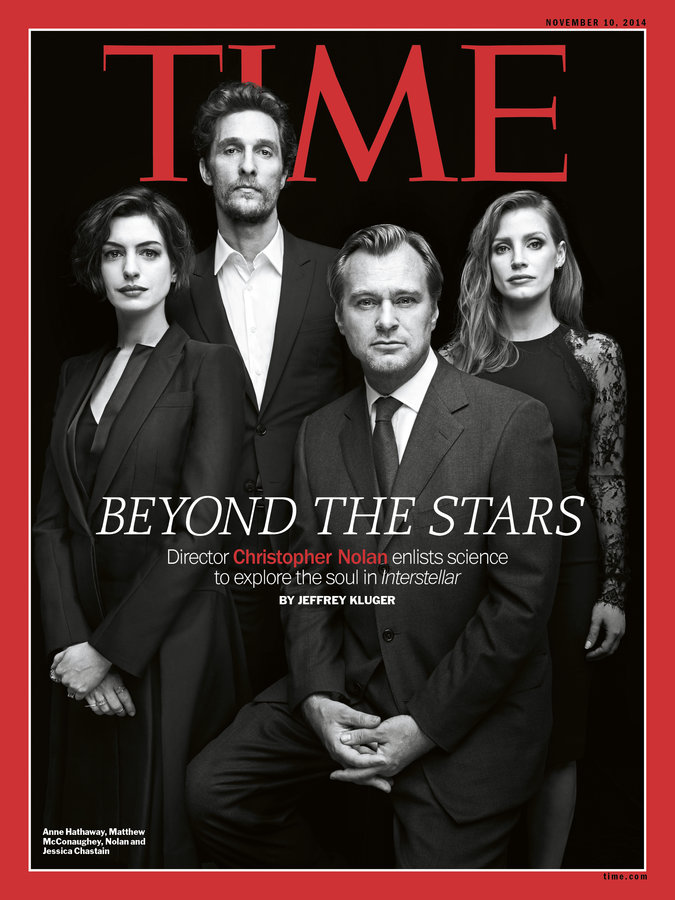 In the “Interstellar” universe, the Apollo missions were a hoax. Check out the clip below:

Hathaway was a bit shy about her interest in science:
“With such an eminence on the Interstellar set, the cast had to get up to speed on the science fast, all except Hathaway, who came to the movie already interested in and conversant with cosmology. But when she talks about that fact, she is almost apologetic, describing her understanding as ‘a grain of sand on Kip Thorne’s beach of knowledge.’ Nolan will have none of that. ‘You shouldn’t be so shy about your interest in science,’ he says. ‘According to Kip, you know a lot about it. He’s on record.’ Hath­away demurs: ‘I was very poor at math and science, but as I got older, it did start to make more sense.'”

McConaughey and Hathaway’s characters are named after real astronauts:
“One of the niftier details in the script involves the names of Hathaway’s and McConaughey’s ­characters—Brand and Cooper, the names of real astronauts. In McConaughey’s case the name is actually twice resonant, a hat tip to both NASA’s Gordon Cooper, whom everyone called Gordo, and to Hollywood’s ­Gary, whom people called Coop. The characters in Interstellar address Mc­Conaughey’s Cooper in the same abbreviated way, a little wormhole of its own that neatly links the lone commander stepping forward to save the planet in Interstellar and the lone sheriff doing the same for Hadleyville in ‘High Noon.'”

“Interstellar” is going where “Gravity” didn’t even try:
“The science, to hear cosmologists tell it, can be spot-on too. For all the merits of last year’s space adventure ‘Gravity,’ it went soft on that part—­particularly when it came to orbital mechanics, with the entire movie turning on an accident that could never happen. But for ‘Interstellar,’ Thorne’s equations were even incorporated into the special effects to ensure that things look the way they should. ‘Kip has calculated the ray tracings going through the wormhole geometry,’ says Princeton cosmologist J. Richard Gott. ‘What he determined is that a wormhole should look like a mirrored ball that might be sitting in your garden, except that when you looked through it you’d see a garden on Alpha Centauri.’ And in Nolan’s hands, it does look like that.” 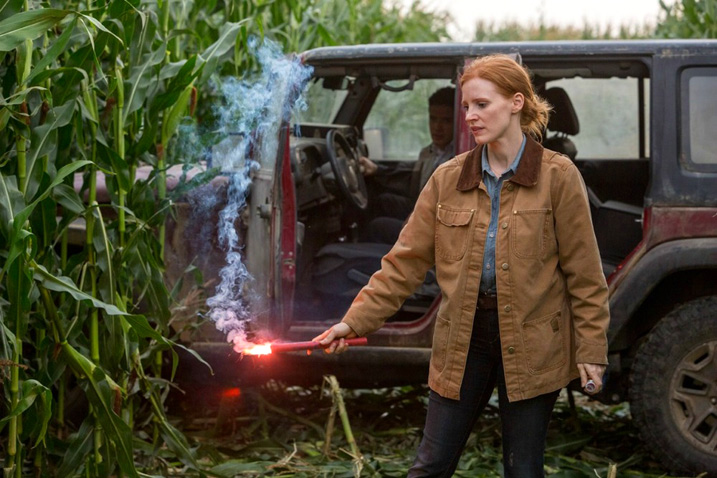 Some of the more intense actions sequences mimic real life events:
“At one point, the ‘Interstellar’ plot calls for the spacecraft to begin spinning at 67 revolutions per minute, a speed that can lead to vertigo, and we see McConaughey’s and Chastain’s characters struggling not to black out. It’s a beautifully shot scene, and it could stand on that all by itself. But if you’re deep in NASA ­geekdom—which Nolan knows many of his viewers will be—the moment recalls a similar spin-up at almost exactly the same 67 r.p.m. aboard Gemini 8 in 1966, a mishap that nearly cost the lives of astronauts Neil Armstrong and Dave Scott. That parallel is no accident. ‘I did add that to the script based on that Gemini story,’ Nolan says. ‘Those are the missions we kept coming back to. That program felt the most raw and experimental.”

“Interstellar” also features real people:
“The scourge that’s killing the planet wipes out crops and turns the world into one great dust bowl. Nolan employs the documentary trope here, with a few elderly earthlings looking into the camera and describing the wasteland their world has become. If it sounds eerily like those actors know exactly what they’re talking about, it’s because they do—and most of them aren’t actors. They’re survivors of the real 1930s Dust Bowl who were originally interviewed by Ken Burns for his 2012 documentary on those plague years. ‘I was watching it for research and was so moved by it,’ Nolan says. ‘We could not in the film make it as bad as it really was or people wouldn’t believe it.'”

“Interstellar” is treating science and religion the same:
“Chastain’s character spends much of the movie in a state of coiled—and sometimes ­uncoiled—rage. But when she’s at her blackboard, working on her equations, she ­relaxes—even exults. ‘She’s protected by the numbers,’ Chastain says. ‘It’s an obsession for her. It’s a way not to feel, and it’s how she realizes that science and the spiritual world are the same thing.’ Nolan doesn’t hesitate to call that spirituality religion, and Hathaway, the science student in the Interstellar cast, sees things that way too. ‘I might botch the quote,’ she says, ‘but I just kept thinking about Einstein saying, “Science without religion is lame; religion without science is blind.”‘ For the record, she didn’t botch the quote.”

And what of the critics who say that the film’s spectacular science and earthly life and love don’t mix well?
“It was impossible to watch ‘Inception’ and then go to bed without the mysteries of the dream world you were about to enter noodling at your thoughts. The same was true of your awareness of the fragility of ­memory—and the destruction of the self that can result when it’s lost—that came from watching 2000’s ‘Memento,’ a mystery involving a man with anterograde amnesia. ‘Interstellar’ will unavoidably help us look at the cosmos more as cathedral than void—a place to contemplate the riddles of space and time, yes, but life, death and love too. That’s explicit in the movie. ‘My character is someone who tries to connect with love through science,’ says Chastain. ‘And when she does, she blossoms.’ And it’s implicit too. It’s not for nothing that Hathaway’s astronaut character is a trained ­biologist and not, say, an engineer. She’s engaged with the science of life. ‘It sounds like, I don’t know, such a hippie thing,’ she says. ‘But go stare at a leaf. You can draw molecular charts, you can talk about photosynthesis or decomposition. But just staring at it is such a treat.'”

Check out the TIME Magazine cover shoot below: