'The Good Wife' Takes Another Slap at Cable-TV Antiheroes: 'The Badass Is the Guy With the Gun' 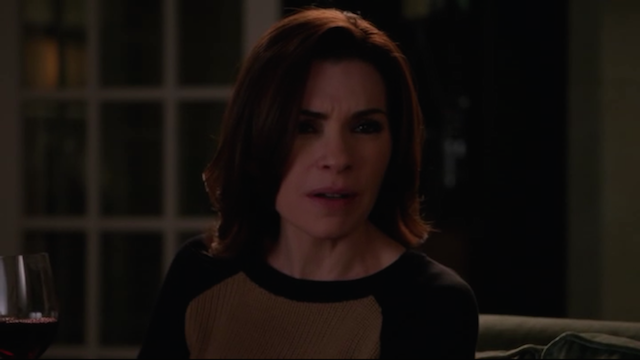 Spoilers for “The Good Wife,” Season 6, Episode 4, “Oppo Research,” ahead.

Alicia’s anxiety over what bombshell might drop next was heightened by two opposing distractions: Her daughter Grace’s choir group, who had inexplicably booked her modest bedroom as their practice space, and the background presence of “Talking at Noon,” a TV dissection of the AMC drama “Darkness at Noon,” which kept breaking into “Oppo Research” like an unwanted intruder.

It’s not “The Good Wife’s” first glimpse of the ersatz show-within-a-show, which began as a shot at AMC’s now-canceled “Low Winter Sun” and has evolved into an ongoing satire of TV-antihero tropes. “Good Wife” creators Robert and Michelle King have a bee in their bonnet when it comes to cable shows, going so far as to take out an ad during last year’s Emmy voting period pointing out that awards-hogging shows like “True Detective” and “House of Cards” produce a piddling 8 or 13 hours of TV while the Kings toil away in the 22-episodes-a-season salt mines — a fairly petty complaint considering that, at 43 minutes an episode, “The Good Wife’s” season runs less than 16 hours.

The Kings are, however, on more solid ground when they go after cable drama’s limited tonal range, the grim post-“Sopranos” morality that permeates such superficially diverse shows as “Breaking Bad” and “Game of Thrones.” Crafting cookie-cutter dramas that pass off adolescent nihilism as genuine complexity is easy, they argue, and as escapist as any superficially fluffier network show.

“Darkness at Noon” made its first appearance in “Parallel Construction, Bitches,” the 13th episode of “The Good Wife’s fifth season. The episode began with a fakeout, diving right into an ersatz “Previously on…” that condenses cable shows’ sins into a brisk montage of washed-out tropes. There’s the tough cop, running down rain-slicked alleyways in search of evildoers, and spouting philosophical dialogue that edges close to gibberish. (This is also the episode where the NSA geeks who’ve been eavesdropping on Alicia all season long start sounding like TV fans trying to guess a show’s next plot twist: Parallel construction, bitches.)

Alicia, who evidently hasn’t been keeping up on her Quality TV, is bewildered, pricelessly, by this rapid recap. “What’s going on?” she asks her daughter. “He shot the bald guy, now they’re blaming the other guy.” Oh.

“In a Material World,” episode 18 of season 5, Alicia sinks into depression after her murdered old flame Will Gardner’s funeral, and looks to TV to cheer her up.

In episode 20, “The Deep Web,” he pulls the same trick, telling a dead, half-naked woman, “You didn’t deserve this, Norma Jean.”

But as often happens on “The Good Wife,” uncompelling TV programming turns into background noise. Alicia and her mother (Stockard Channing) aren’t even paying attention.

Alicia is miffed when the host of “Talking at Noon” runs down the events of the latest episode, which she’s evidently missed while hashing out the details of her campaign: “Spoiler alert! Sam is dead. John was arrested. Linda gave birth. Miguel did look at the flowers, and the yellow arm was moved.”

It is, as one of the panelists observes, “badass stuff.” Indeed, the word “badass” appears nearly every time “Talking at Noon” makes its way into “Oppo Research,” climaxing with an argument over which of “Darkness at Noon’s” characters is “the biggest badass.” “The badass,” Weisberg concludes, “is the guy with gun.”

On one level, this is just sour grapes, a critically acclaimed but low-rated and awards-starved network show taking petty slaps at its cable-TV competition. But there’s also a more pointed contrast being drawn. It’s no accident that, of all the potential “badasses” ventured on “Talking at Noon,” every one is a man, and the only woman mentioned are either dead bodies or incipient mothers. This is a world in which to be “bad,” in a good/bad way, is to be male. (There’s even an argument between panelists about the hero’s wife, who “took his guns” and wants him “not to be a badass,” that sounds a lot like the way some fans of “Breaking Bad” talked about Walter White’s wife, Skyler.)

Maybe, “The Good Wife” is not-so-subtly suggesting, Alicia is a “badass” as well. She can be as ruthless and amoral as any man, even if she never picks up a gun. “I’m not your superhero,” she tells Johnny Elfman, and she goes on to prove it, icily dressing down her son for lying to her in one breath, then telling him how to lie for the sake of her campaign in the next. That’s not to say “Saint Alicia,” as Eli insists on branding her, is about to turn into Heisenberg. But it seems as if she’s going to get her hands dirty, and she may even begin to like it.

This Article is related to: Television and tagged AMC, Breaking Bad, Game of Thrones, The Good Wife, The Walking Dead