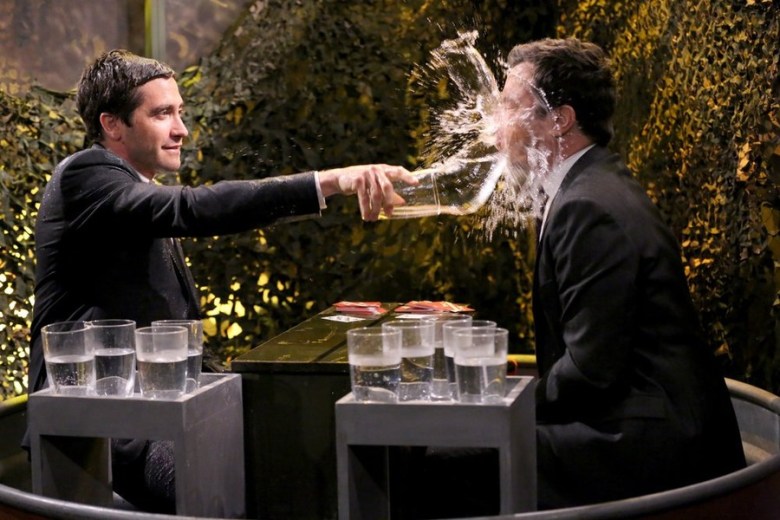 It’s not easy to market independent films. By definition, they don’t have a big budget, and that includes for actually selling the film to as wide an audience of possible. Among content pushes online, the films also rely heavily on their famous faces to hock their projects on national television. Of late, these “Late Night” shows have been coming up with more and more innovative ways to engage with their audiences, especially on a viral level. We’ve rounded up the best of the past week, so take a look below and support your favorite independent film this week.

Gyllenhaal appeared on “The Tonight Show” promoting “Nightcrawler,” and you could say he made a splash. The actor and Fallon faced off in a quintessential Fallon game, the card game “war” mashed up with, well, dumping water on each other. You’ll have to wait for the end of the clip to see the final pay-off. It’s a doozy!

Do you know the song “Alphabet Aerobics” by Blackalicious by heart? You’re in good company because so does music fan Daniel Radcliffe. Brace yourself for the actor’s rap game as he performs it from memory. Jimmy Fallon says “It’s one of the trickiest, fastest songs I know.” Radcliffe is promoting his new film, “Horns.”

READ MORE: Daniel Radcliffe on Ebola, ‘Horns’ and Being Propositioned for Sex By a Fan

Jimmy Fallon’s favorite Christmas gift of this or any other year is classic video game Mike Tyson’s “Punch-Out” for the Nintendo Entertainment System. “Tonight” projects the game onto the screen, and Tyson faces off with himself, the final boss for the video game. Spoiler alert: Mike Tyson is the winner!

From Monday, this was one of those crazy “Surreal Life”-esque celebrity mash-ups. A game of charades with Ewan McGregor, Charles Barkley, Jeff Tweedy (of Wilco) and Fallon himself. It’s an unusual combination that meshes well; the four men had great comedic chemistry, tackling clues from “Bride of Frankenstein” to “Teenage Mutant Ninja Turtles” to “Ice Ice Baby.” Barkley is promoting the upcoming NBA season, while McGregor, well, he doesn’t have anything coming out soon in the States, but come on. Who doesn’t like Ewan McGregor?