Why Legendary Writer Andrew Davies Does Adaptations: 'F*ck All Happens to You' 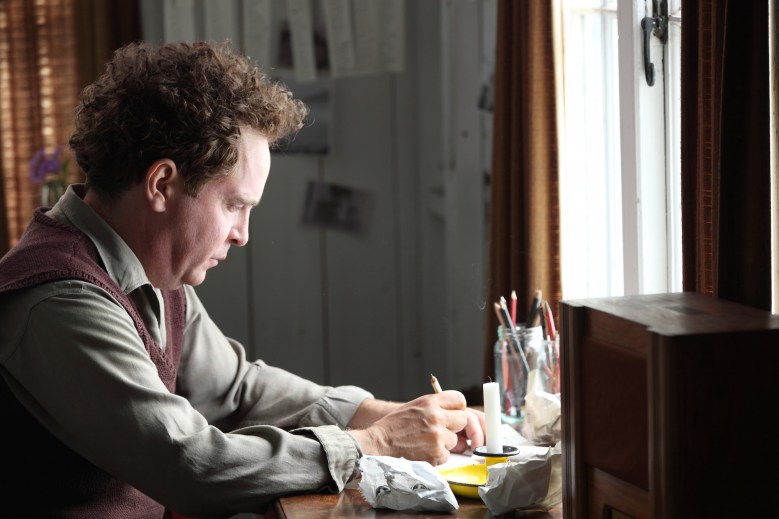 The acclaimed screenwriter adapted “Bridget Jones’s Diary” for film, wrote the script for the original British “House of Cards,” and has literally dozens of TV miniseries to his credit. In particular, he is beloved by Jane Austen fans for his singular work in bringing “Pride and Prejudice” to life in 1995 for the BBC, thus creating an entire generation of women obsessed with Colin Firth.

Now, the master of adaptation has crafted an original story around the last days of legendary poet Dylan Thomas, played by Tom Hollander in the BBC America film “A Poet In New York.” Indiewire could not resist the opportunity to ask why Davies has put in decades adapting Dickens and Austen for television, how Dylan Thomas inspired Davies to become a writer in the first place, and why Nicholas Cage served as an inspiration.

Looking over your full list of credits, it stands out that so much of what you do is drawn directly from history or literature. I was wondering, is there something about those particular sources of material that attracts you to them?

I guess so, in a way. It’s kind of circumstance, the way things work out. In my early days as a writer, I wrote mostly about things that were derived from my own life and my own experiences, because nobody is going to give you an adaptation job until you’ve kind of proved yourself as a writer. I’ve always been a teacher, and so in a sense, my adaptations of the great works of literature have been in my head for a very long time, always changing, because in a way when you’re reading a great book you’re kind of making your own adaptation at the time, just seeing the characters in a particular way. And it changes with the decades and it changes as you change, to some extent. If I was going to do “Pride and Prejudice” again, I think I’d do it differently from how I did it the first time. So there’s that.

And now, it’s the thing about getting older and being a full time writer — fuck all happens to you. You just — especially if you’re happily married and [in a] long marriage like I am… There was plenty of material in the early days about infidelity, friction and all those kind of things. But I’ve settled down to a very even plane. So I haven’t really got material that I would want to write about from my own life.

Although, if I had the self-discipline to say no to anything for a little while I’d quite like to go back — I don’t know if anyone would be interested or not — to write about my parents and my own life as a kid and all the stuff that I couldn’t write about directly, or felt I couldn’t when my parents were alive. I know a lot of writers just go ahead and do it, but I never felt quite able to. And I love doing adaptations — I mean, if somebody’s going to come and say: “How’d you like to do ‘War and Peace,’ Andrew?” — what a lovely way to spend a year.

So you wrote your original work, and then they started bringing you in for adaptations more and more. Was there a tipping point where you felt: “Oh, I’m the guy they ask to do all the adaptations now?”

Yeah, it was probably round about the middle of the ’90s, after “Pride and Prejudice.” I did become that guy. [Laughs.] First on the list, which is a very happy position to be in.

The range of stuff you’ve been able to do as a result of that has been really impressive. I would say that it’s remarkable how “Tipping the Velvet” and “Pride and Prejudice” come from the same screenwriter — because those are very different series.

Adaptions do enable you to kind of express yourself, talk about life, through a story that somebody else wrote. I mean there have been some things recently, I guess the Dylan Thomas thing is part of it… I was obviously working from biographical facts but inventing a lot of scenes.

What was it about Dylan Thomas that drew you to writing about him?

He was very much of a boyhood inspiration. I had dreams of becoming a writer but I didn’t know anybody who was a writer. Nobody from my family had been a writer, they were all teachers. Coming across Dylan Thomas — he had such a similar background to me. His dad was the Senior English Master of Swansea Grammar School, my dad was the Senior French Master of Cardiff High School, only about 40 miles away. I’d gone to the seaside in the same places that he’d gone to and written about, and he’d written short stories about his childhood and I thought: “Well, that sounds very much like my childhood, so you can write about that, can you? And get it published?” And I thought, “Well yes, I will.” He wrote these wonderful radio plays, “Under Milk Wood” is the most famous one. And that was how I started my career — writing radio plays. So yeah, he was very, very big in my life.

So, is there a reason why it took until now for you to approach his life and work?

No, it was just chance that it was his centenary. Aand it wasn’t my idea, I hadn’t even realized it was his centenary. Griff Rhys Jones, whose idea it was, had originally wanted to do a documentary about the last days of his life but the British Broadcasting Corporation [BBC] said they’d rather have a drama. He asked me if I’d be interested in writing it, and I just kind of leapt at the chance.

Did he have any idea that you were so inspired by [Thomas]?

Dylan Thomas is a very important cultural figure in Wales in a very interesting way. The Welsh are very proud of him, but rather protective about his reputation of whoring, drinking, etc. It was very un-Welsh. His granddaughter, who is very much a kind keeper of the flame, was very anxious that we should be… She didn’t really like us talking about it or writing scenes in which he is having it off with the Polish countess who he met the same evening. She was very keen that we celebrate his poetry, but that’s what I wanted to do as well because it’s stupid just writing a thing about an alcoholic who dies in New York. It would be like “Leaving Las Vegas,” wouldn’t it? [The 1995 film starring Nicholas Cage, directed by Mike Figgis.] It’s like “Leaving Las Vegas,” with wonderful poetry. [Laughs.] That was a great film, actually. I loved that film.

Would you call it an inspiration for this?

“Leaving Las Vegas”? Yeah, a little bit. There was even a little bit of a steal from it — I think at one point I have him saying, “Thank you nurse” to Liz Reitel [played by Phoebe Fox]. It’s a wonderful bit in “Leaving Las Vegas,” which I’ve only seen once, years ago. I sort of remember him shouting, “Nurse, two more Manhattans” to the waitress. Dylan Thomas had that similarity to the character in “Leaving Las Vegas” — that he turned women into nurses. She thought she was his colleague and his girlfriend, and she turns into a mother and nurse substitute. I think it’s a tendency that Welsh men do, because a lot of Welsh men were spoiled by their moms and they try to recapture this in their subsequent relationships with women.

My mom didn’t spoil me.

I didn’t want to ask but I sort of did.

She was a tricky prima-donna-ish sort of a woman herself, who always wanted to be the center of attention. So in a way, I’ve always looked for a big sister or mommy type who’d give me what I didn’t get. [Laughs.]

I’m curious about the decision to frame a Dylan Thomas film around the days surrounding his death, as opposed to another time period in his life. Was there a particular motivation for that?

Well, it’s got a kind of brutal finality, it’s got a tragic dimension which is very good. I can remember in the days when they had hanging in Britain — it was always a good idea to flash back from the scaffold as it were. So it’s a simple way to structure your story, and I’m always looking for simple structural solutions. If you were to concentrate on a different period, it leaves the story so incomplete. I mean, I think, it was called “The Edge of Love,” that Dylan Thomas movie about a period of his life during [World War II] and Keira Knightley’s in it… I felt, “Well, why are we watching that period of his life? Why doesn’t the actor look anything like Dylan Thomas?” [Laughs.] It didn’t seem to be about the poetry. So I thought we definitely want this one to have a lot of poetry in it.

Tom Hollander does a beautiful job with it.

He does. He’s fantastically good. I’m so glad we got him. I can’t think of anybody else who could have done it really. He even looks like Dylan Thomas and he’s capable of being a horrible person and being a lovely person, more or less at the same time.

I don’t know if this is the right way to phrase it, but do you see the story ultimately as a tribute or a cautionary tale?

Both. [Laughs.] I think it’s often a paradox about writers, that a lot of writers are at their truest and their best when they are writing — often you read about their lives and you think: “God, you are just such an awful person. [Laughs.] You treated your nearest and dearest so badly or you were racist or whatever, but then in your writing you’re the best person you could be.” It’s a kind of paradox.

It’s funny — when we were screening it in Wales, actually in Llan, where he spent a lot of his life… We were taking questions after, some guy came up from the back and said: “I didn’t know a great deal about Dylan Thomas, but what I knew of him — I loved his poems and ‘Under Milk Wood’ — your film has spoiled all that for me. It’s ruined my feelings about Dylan Thomas.” I don’t think many people agreed with him about that but you could see what he meant. [Laughs.]

Learning the truth about your heroes is always tough.

Yes, but that’s life. Would you rather be ignorant? You wouldn’t really.

This Article is related to: Television and tagged Tom Hollander