Having 'The Right Stuff': Ed Harris and Jeff Goldblum Reflect On the Most Realistic Space Drama 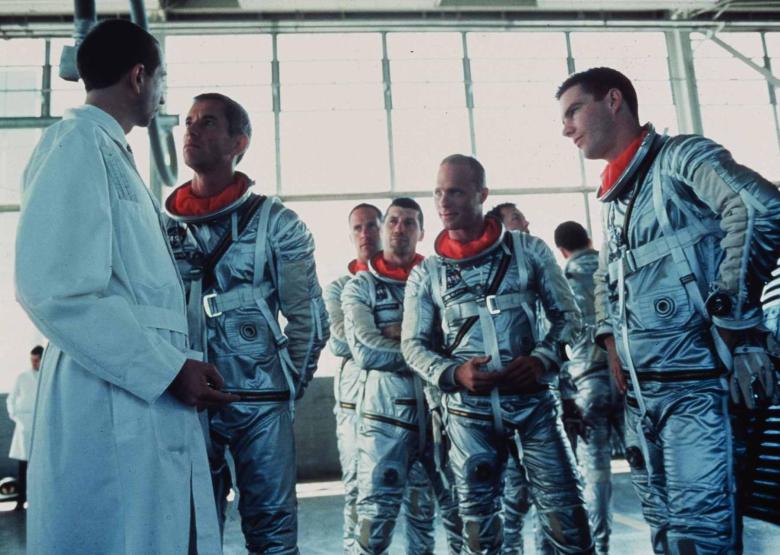 WIRED’s December issue was guest-edited by “Interstellar” director Christopher Nolan and features an oral history of the 1983 film “The Right Stuff.” Adapted from Tom Wolfe’s best-selling book of the same name, “The Right Stuff” details the test pilots who were selected as astronauts for Project Mercury, the first attempt at manned spaceflight by the United States.

With a three-hour run time and an unconventional structure, “The Right Stuff” wasn’t a typical space movie of the era. Audiences were used to the calm, thought-provoking serenity of the futuristic “2001: A Space Odyssey,” and what “The Right Stuff” brought was a shaky, dangerous, amateur look at space travel.

Kaufman called it, “the longest movie ever made without a plot,” while Nolan himself called called it, “an almost perfect movie.” In addition to revealing some on-set shenanigans, the piece details the work behind the special effects used to create the film’s then unprecedented shots, such as the visual look of a plane of breaking the sound barrier or exiting the atmosphere. Shots that today would be created with CGI.  Here are a few highlights from WIRED‘s piece.

The price of flight.
In 1979, Hollywood producers Irwin Winkler and Robert Chartoff (“Rocky,” “Raging Bull”) paid $350,000 to purchase the film rights to “The Right Stuff,” Tom Wolfe’s best-seller about the space race. “There was a competition with Universal to buy Tom Wolfe’s book,” Winkler said. “They wanted it for John Belushi as a comedy.”

The storyboard was enormous.
“We created around 1,800 panels. Phil wanted to represent the whole movie,” said Special Visual Effects Supervisor Gary Gutierrez. “We laid out the storyboards on eight or 10 tables in a conference room and then Phil told the story, walking Ladd around the room. Whenever he’d finish a couple of tables, we’d lay out more. It took several trips around the room.”

Chuck Yeager became a technical consultant.
“Hollywood is in the business of make-believe. I didn’t just walk out and fly the X-1 supersonic. It took unpowered flights and then nine powered flights,” Yaeger said. Gutierrez added, “He would look at stuff and say, ‘Well, that’s not exactly how it happened, but I know you fellas have to flower it up.'”

Ed Harris looks practically identical to John Glenn.
“Ed Harris walked into the office, and we looked at him and couldn’t believe that such a person existed,” said Chartoff. “He was not only a wonderful actor but looked so much like John Glenn. And of course we looked at each other and said, ‘Oh my God, this is the guy we want.’ I said to Phil, ‘Please, don’t let this guy get hit by a car. At least, not until after the picture is made.'”

Jeff Goldblum and Harry Shearer didn’t have any actual lines.
“I don’t believe there was an audition, because Jeff Goldblum’s and my characters had no lines written for them,” Shearer said. “Phil Kaufman conceived them, they were not representative of anybody that was in the book, but they were a plot device to move things forward. Phil basically just said, ‘You and Jeff improvise. Hopefully it’ll be a little funny.'”

“Mr. Philip Kaufman had me in Invasion of the Body Snatchers in 1978. I’d do anything with him,” said Goldblum.

“There were 134 speaking parts. Every day somebody new would show up on the set,” added Kaufman. “I had my mission of what I wanted to do, but I also wanted to be entertained. I had Harry Shearer and Jeff Goldblum; life could not have been better.”

Dennis Quaid lost his lunch.
“We sent Dennis Quaid up with a test pilot,” said cinematographer Caleb Deschanel. “He had a Nagra recorder in the cockpit. Phil leans over to the pilot and says, ‘Give him an exciting ride.’ So they go up and come back down 20 minutes later, and Dennis is green. The sound guy goes in to get his Nagra, and Dennis had thrown up all over it. In the dailies, you see Dennis smiling, and then the pilot starts doing barrel rolls, and Dennis disappears from the frame. We asked Dennis about it and he said, ‘Oh, I had my script on the floor and I was just checking my lines.’ It was total bullshit.”

To get realistic shots of flight, they threw models into the air.
“One day we went to the model shops to see the first shots of the supersonic jet,” said Production Designer Geoffrey Kirkland. “We had a production team out there, a whole unit unto themselves. They’d been working for six months, making these amazing models. Every little rivet had a little bit of grime. They’d built a shop, gotten a motion control camera.

“‘Make it like they did in the old days’ became our marching orders,” Gutierrez added. “So I opened the window and had my director of photography go stand downstairs with his back to the wall and a handheld camera looking up toward the sky. On the street, crew people were holding a large parachute to catch the plane that I was going to throw out the window. Our model of the X-1 was 4 and a half feet long and cost $6,000. The model makers were holding their breath. The next day we showed Phil the footage and he loved it.”

“These guys loved their planes,” said Deschanel. “At one point when the guy was flying the X-1, he landed it too hard. It burst into pieces. He was a burly guy who had built this thing. He went over to it and picked it up. He was in tears.”

How did “the Right Stuff” effect John Glenn’s run for President?”
“There was a big picture of me on the cover of Newsweek: ‘Can a Movie Help Make a President?’ It gave a much different impression of what the movie was about,” said Ed Harris.

“The movie suffered from that approach,” Kaufman added. “I really wanted the film to be sold as about ‘the right stuff’: men in leather jackets, their connection to the cowboy thing. But somebody somewhere at the studio wanted to go back to that magazine-story approach. The movie should have been marketed as tougher and more mysterious than that magazine cover.”