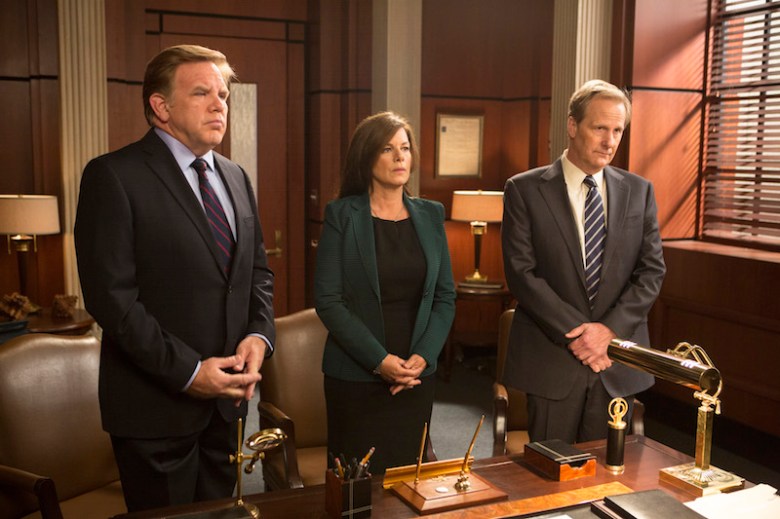 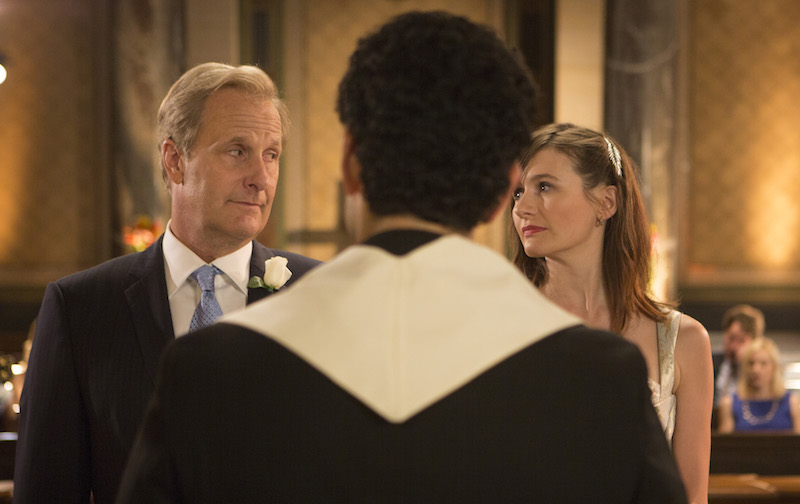 The newly-minted Mr. McHale is going to jail, after practically volunteering himself to be held in contempt. Will’s confidence from last week regarding his possible incarceration was replaced with relative indifference in Week 4, as the left-side’s favorite Republican pundit was sentenced to an indefinite prison stay he absolutely knew was coming. The best case the former prosecutor made for himself was by stating his sentencing could only be “coercive,” meaning its reasoning could only be derived from the belief Will would eventually give up the name. His resolute nature—”I can’t give you the name of my source; I’m just not allowed to”—illustrated that such an argument would be invalid, but his new wife/then fiance (who he desperately wanted to be with) and his demanding job (which was in flux due to Lucas Pruitt’s bid to buy ACN) had to factor into his desire for freedom, hence the judge testing Will’s resiliency with the predictable ruling.

But let’s forget for a moment that Will is heading to the big house and spend some time rejoicing in the consummation of a romance running the length of the series (especially since Aaron Sorkin & Co. gave us so little time in comparison). Will and Mac’s relationship has been the driving force for all that’s happened on “The Newsroom,” a fact highlighted by Will’s change of heart regarding everything from his ratings relevance to how he treats his staff. The two of them deserved the wedding of their dreams, and we deserved to see it. I’m perfectly fine with them finding a chapel inside city hall rather than throwing a six-figure weekend event in the Hamptons, but I wish we would have been given a little more of the good stuff. Hearing Will’s vows was one thing I was particularly looking forward to, and if the season wasn’t so damn short, I think we may have gotten to hear them.

Still, between Charlie’s search for the perfect musician and Will convincing a priest to perform a Catholic service outside the church (possibly the most miraculous event to be seen yet), Will and Mac’s marriage was a memorably lovely event, albeit one marred by outside circumstances both diegetic and non. Was there any aspect you particularly loved? Did you feel a bit slighted by its brevity? Let me know in the comments section below because frankly, this momentous union deserves more words than I can give it. 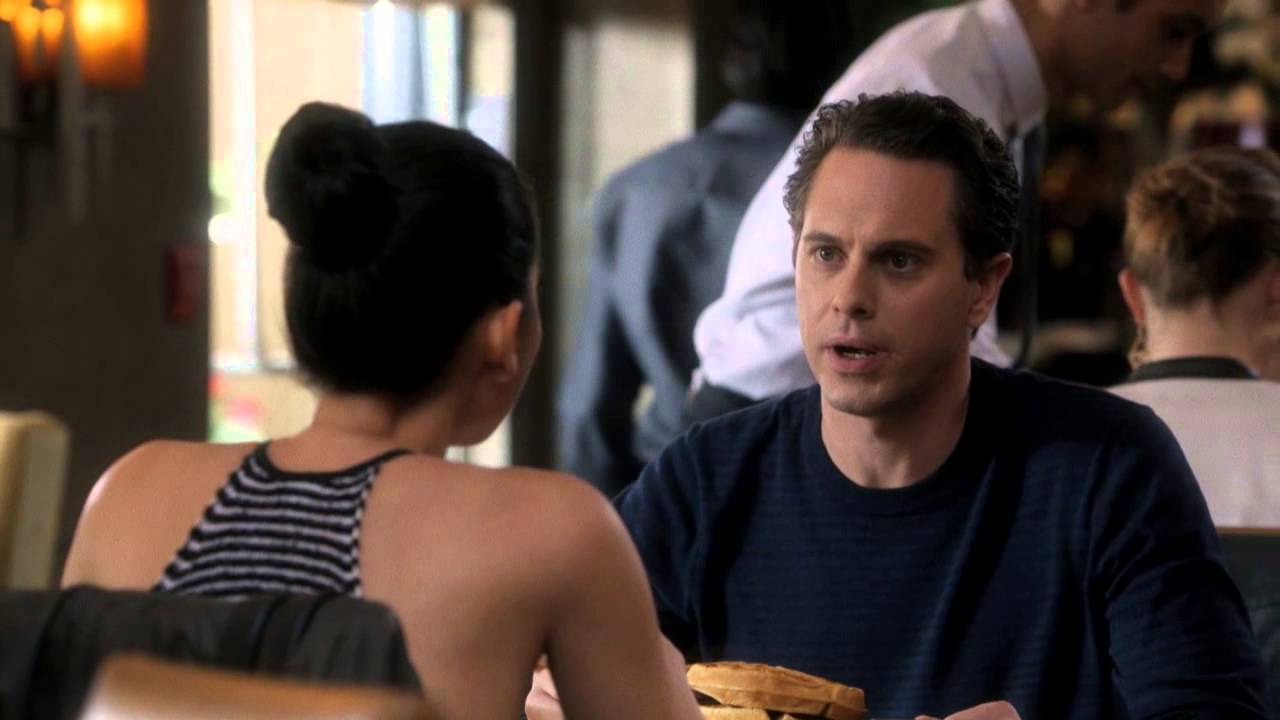 Wyatt: “You two are a couple.”
Don: “We’re not, but maybe we can do this later.”
Wyatt: “No, you are. I have a signed letter declaring that you are. It was sitting in my office in a pile of things I hadn’t gotten to yet.”
Sloan: “Somebody ratted us out?”
Wyatt: “Yes.”
Sloan: “Nobody around here would drop a dime. You’re blowing smoke. Who cheesed?”
Don: “Okay, Muggsy.”
Wyatt: “You did.”
Sloan: “Huh?”
Wyatt: “You did.”
Sloan: “Which one of us are you talking to?”
Wyatt: “I think you know.”
Don: “What’s he talking about?”
Wyatt: “Sloan wrote a letter to HR declaring the two of you a couple.”
Sloan: “Yeah, it was after you made $125 off the Chipotle trade I tipped you off to.”
Don: “We spent the last two weeks trying to conceal from this man we were dating and you knew the whole time you’d sent him a letter saying we’re dating?”
Sloan: “Mmhmm.”
Don: “Why?”
Sloan: “Well obviously I was hoping he’d never find out.”
Don: “Well you knew he was going to read the letter eventually!”
Sloan: “‘Eventually’ is a wonderful time of day. This was a cross-that-bridge-when-we-get-to-it situation for me. And here we are. We’re at the bridge.”
Wyatt: “Is lying to corporate something you two do habitually?”
Sloan: “Don and I like to make decisions about lying on a case-by-case basis.”
Don: “Maybe you’ve helped enough.”

Meta Sorkin-ism of the Week: 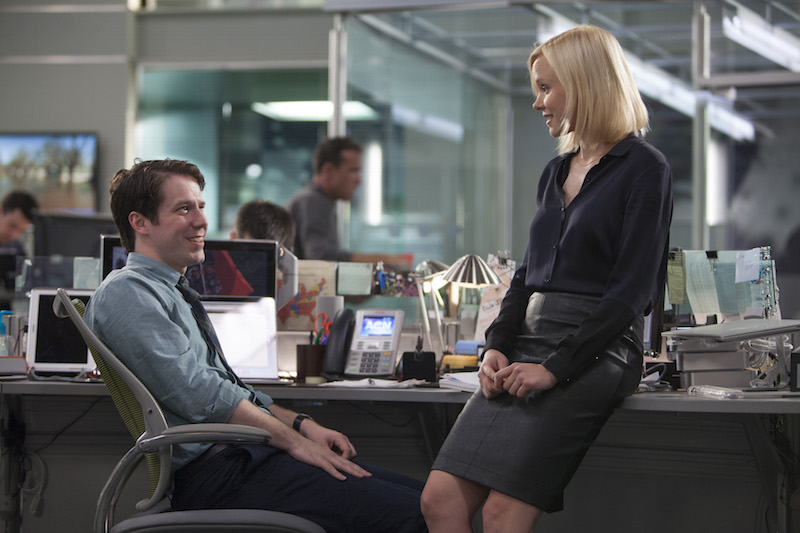 Tonight’s episode ended with messages of love and honor, which almost allowed us to forget much of “Contempt” was built around vengeful anger. As usual, the biggest problem of a week on-the-whole improved from the last was found in the Jim and Maggie storyline. Sorkin is clearly struggling to find a way to match these two together before the series ends—another casualty of the abbreviated season—and in doing so, he’s had to cast one character as an outright villain. Hallie, who we has been on a path to moral failure since casting the sarcastic tweet that got her fired early in the season, finalized her status as ACN’s journalistic enemy when she laid out her emotional issues with Jim as news.

Sorkin tried to balance the scales a bit when Jim lashed out at her for another article she was writing (“Does your piece begin ‘Dear Penthouse’…”), but it didn’t compare to what she did in the end. Hallie’s confessional piece castigating “Tim’s” behavior, combined with her leaking Will’s return to the Correspondents’ Dinner, made her out to be the villain of the season, one who did much more damage because she used to be on the side of the righteous.

But where’s the meta part of this? It arrived with vehement hostility as Jim and Hallie had it out on the ACN balcony. Jim, while attacking the Carnivore’s and Gawker’s of the journalism world, went off on Hallie for labeling professionals as “old media” and the “New York elite” and accusing amateurs of being jealous rather than insightful. Then, when Hallie accused Jim of having a problem with “the audience” rather than her (that they “like what they like”), Jim said he didn’t give a shit about them “liking,” “following,” “friending,” or “trending.” “It’s just ugly,” he said, before casting off another accusation—fear of technology—without batting an eye.

It was then that Jim became a full-on stand-in for Sorkin, providing the frustrated writer with a much-needed outlet for his own issues with critics and audiences alike. Everything Jim said represented a fight Sorkin has had through or because of “The Newsroom,” and before he could move on with the story itself, it felt like he needed to set the record straight.

Unfortunately for Sorkin, he overlooked one label hurled at him repeatedly over the years: sexist. Casting Hallie as the representative of all things wrong with modern journalism won’t help Sorkin overcome the critics who see him having a problem with women, even if he has worked overtime making Maggie and Mac into less targetable lightning rods for critics. Still, here’s hoping he got it all out, as Sorkin is always better when he’s less worried about how his characters make him look and instead lets them be who he really wants them to be, from the get go.

There was a lack of breaking news this week, but I will say I had no idea the first time the Supreme Court supported a claim of protection under the First Amendment was in 1919. That’s 128 years since it was adopted as part of the Bill of Rights, making its first applied use one of extreme significance. What better example could they have set for us today than to side with freedom of speech over the espionage act. If only it had helped Will out, too. 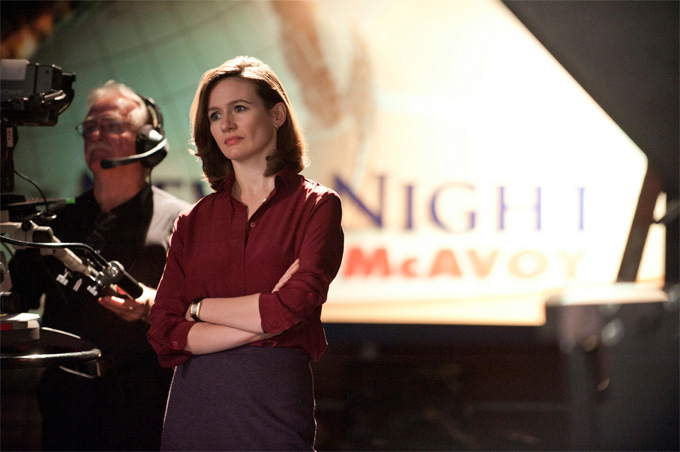 I gotta give this week to Emily Mortimer. Her rain-soaked fight with “the source” was something to behold, from her threat to quit her job and walk straight to the FBI if the documents were dumped unprofessionally, to her coded choice to show up sans-umbrella. MacKenzie has been doing more real reporting this year than ever before—though she was hampered by a corrupt EP last year—and it fits her well. Mortimer has always been a fine performer, able to switch between the gullibly naive Brit (“Match Point”) to the confident brainiac she is here (she’s also got a deft ear for humor, as evidenced in “30 Rock”). Her future after “The Newsroom” should be a bright one, especially after landing another comedy already (“Doll & Em,” currently renewed for a second season by the UK’s Sky Living with U.S. distribution TBD). 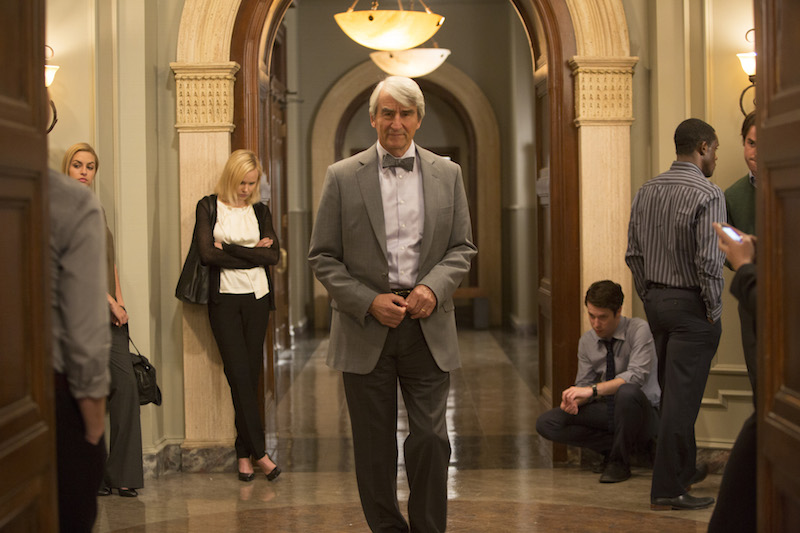 Yes, the above quote is funnier than it is inspirational. Yes, Will’s plea to the court for fairness was perhaps the most tearful moment of pride to be found in the episode if not the season thus far. Yes, even the wedding played out to the Sorkin-favorite “Ave Maria” was inspirational in the sacrifice and joy from all involved. Yet it’s these small moments between Will and Mac, as illustrated above, that give me the most hope for the upcoming series finale.

We only have two more episodes of “The Newsroom” before ACN shuts down forever for us folk in the real world, and I’m going to remember it for these small touches of heart as much as the big. I’m sure there will be plenty of the latter coming in the final two hours, so let’s take a moment and remember the former today. List some of yours in the comments section below. There sure are plenty to choose from.