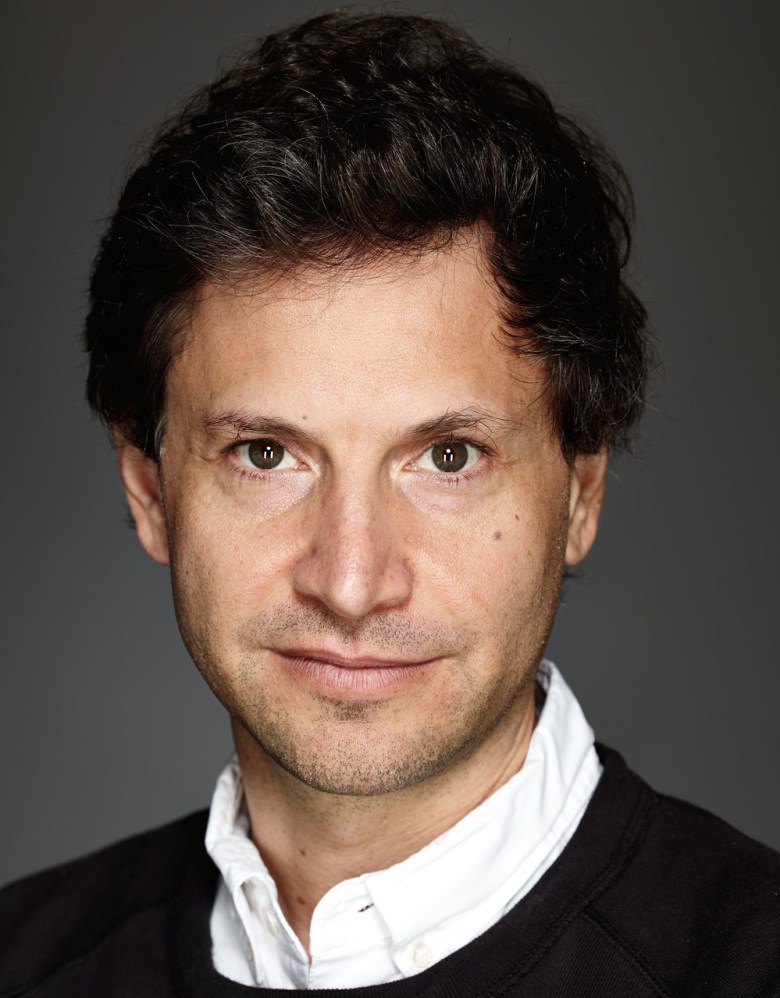 Three years after directing Brad Pitt to an Oscar nomination in the 2011 sports drama “Moneyball,” Bennett Miller (Oscar-nominated for “Capote”) is finally back in theaters with his fourth feature “Foxcatcher,” which opened in select theaters last Friday after screening at every major festival this year, including Cannes, Toronto and New York. The haunting drama, like everything Miller’s put out as a director, has been a hit with most critics. And it’s sure to follow in the footsteps of “Moneyball” and “Capote” to become a major awards player this season.

In development for over eight years, “Foxcatcher” tells the true story of wrestler Mark Schultz (Channing Tatum), who formed a too-close-for-comfort relationship with his sponsor, millionaire John du Pont (an unrecognizable Steve Carell), as they trained for the 1988 Olympics in Seoul.

Indiewire spoke with Miller a few days before the film’s release. “Foxcatcher” continues to expand in the coming weeks.

READ MORE: Why Steve Carell Didn’t Change His Approach For ‘Foxcatcher,’ the Darkest Project Of His Career 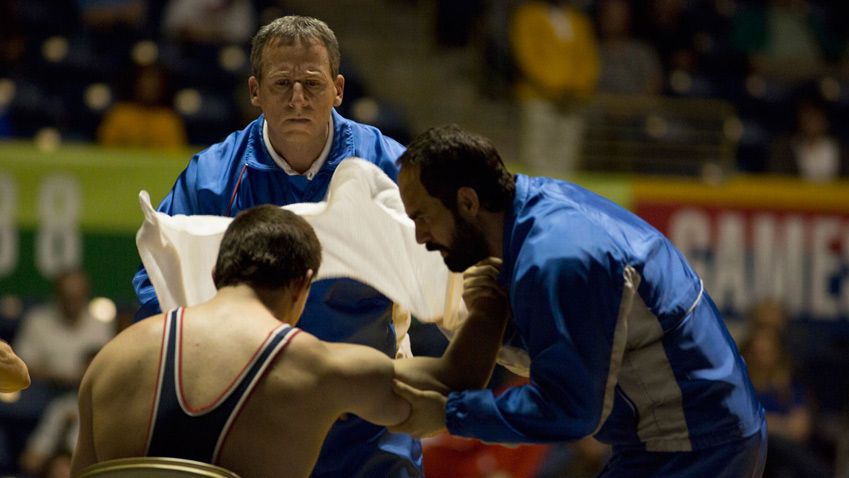 This year marked your first time premiering a film of yours at Cannes. What most surprised you about the experience?

Just how familiar everybody felt. For me it was not as heady an experience as it was a warm, familiar experience. Does that make sense? I just felt like this is a community of people who really like and care about film and it’s just a really good environment to be in. It’s a very warm and comfortable environment to be in and so many people hanging out on the patio of the Royalton.

Mike Nichols says that directing is kind of like having sex. You rarely get the opportunity to see anyone else do it and truthfully filmmakers spend so much time in seclusion working on their films as with the case with this one. To just get out and be in a community of people who are just there, it’s really enriching.

Did you get out to see anything while you were there or were you too busy with this project?

I only saw one other film while I was there, but I did get to see a lot of people.

What was that film?

What did it mean to win the festival’s Best Director award, to be recognized by your peers?

You hear people say this when they get awards sometimes and I’m sure I really understood it before, but truthfully the dominant feeling is humility. It really is humbling. It’s a feeling of gratitude. It’s just a feeling of gratitude and encouragement. I think every filmmaker wants their work to be appreciated and that’s all that was. Not all that was, that’s really what that was for me. 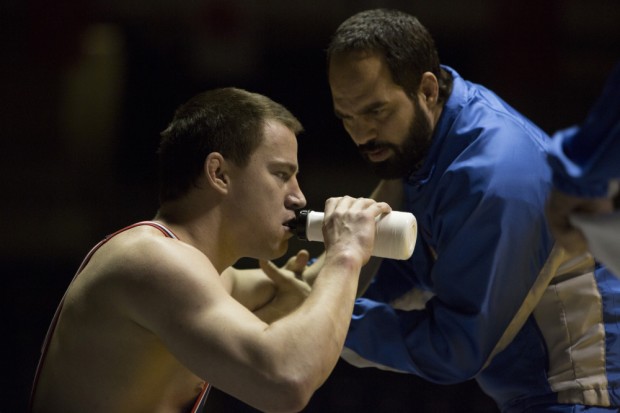 Now, given that you premiered this film back at Cannes, you’ve been on a press blitz longer than most filmmakers are accustomed to, especially filmmakers with films going up for awards consideration into the fall. Has the experience been trying, joyful, overwhelming given the fact that you’ve been campaigning the release of “Foxcatcher” since May?

It hasn’t been a blitz. It’s not like every day we wake up and travel around promoting the movie. We’ve been to a handful of festivals and in every case, it’s been fun because we all like each other and we all get along really well. We’re always happy to see each other. I mean the cast and the producers have made the rounds. It’s also nice to present the film, so it really has not been a blitz. It’s not been an overly rigorous or exhausting, aggressive peddling and hawking of our wares [Laughs.] It’s really been going to a few festivals and every so often doing a flurry of press. So far, so good.

But, you still must feel so ready to just get the film out there to the public.

For sure, absolutely. It was, I think, eight and a half years ago now since I first encountered the story and that’s a good word—ready. I definitely feel ready for this thing to finally be out.

Are you ready to let go of it? Do you think you can ever let go of this project given how much you invested in it?

Yes. Without a doubt, for sure. It no longer belongs to me. You’ve been doing the press, promoting the film. I feel like more like a spectator at this point because it really is more about how people relate to the film now than anything I’ve got to say or do.

I’m curious to know what it was like coming on to “Foxcatcher.” I know you initially started first working on it before “Moneyball” even came to be. But, to go from “Moneyball,” a film you were brought onto by a studio (Sony), to a passion project that you’ve been working on for so many years — what was that transition like for you?

“Moneyball” was a passion project too. Absolutely. It wasn’t as simple as a studio assignment like ‘Here’s a script, go off and do it.’ It really wasn’t like that at all. But the time “Moneyball” came to me, there were a lot of broken pieces scattered all over the place and it was an opportunity to re-envision a project that had a troubled past. So, I don’t feel like they are in such separate categories. The difference is that “Moneyball” was a much more visible thing and there was a history of trying to get a version of that film made and “Foxcatcher” is something that really just began with me reading some newspaper clippings and developed it from scratch. But, the personal investment and care was really not that different. 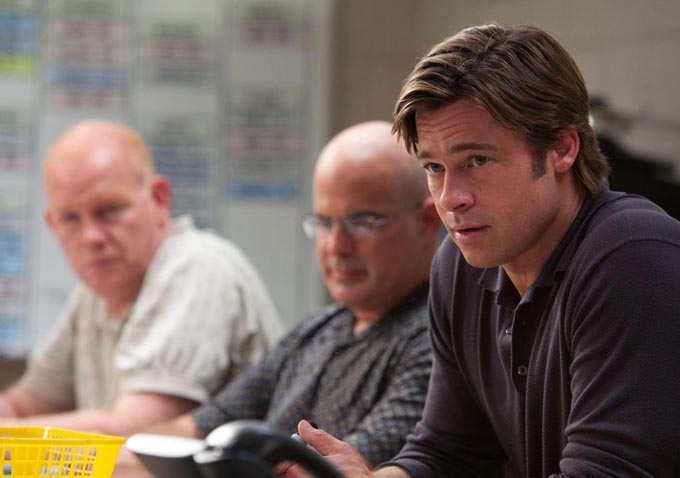 “Moneyball” was a studio picture and “Foxcatcher” is not. It’s an admittedly more independent film given the involvement of Sony Picture Classics. Do you see your project in those types of terms — studio efforts, indies?

Everything I’ve ventured into so far has had the same set of criteria and it really always comes down to a matter of control and the question of will I be able to realize the vision. Whether it’s regarded by the outside world as a studio thing or an independent thing is sort of immaterial. The bigger question is will I be able to do what we’re setting out to do? And in every case so far, I’ve felt regardless, it’s always going to be a challenge. Making a film is a challenge. But, I’ve always felt like there was a path to the vision.

In the case of “Moneyball” it’s a studio film, but it’s the peculiar circumstances of that arrangement that we were able to negotiate with Brad [Pitt] as a producer really made it feel like an independent film than what one might think of as the committee of studio film. It wasn’t like that at all.

I love you as a filmmaker. I have one beef to pick: You don’t make enough films! Why the huge gaps in between projects, I’m curious.

Well, thank you Nigel. It’s hard, man! It’s hard. It’s hard to get a film made properly. It takes time and hopefully I’ll be able to find more efficiency, but you sweat the details and there’s a standard and something’s gotta give and in my case, it tends to be time.

One reason is because you’re clearly extremely selective with what you choose to take on. You haven’t flagged yet. All four of your films have been terrific.

It has something to do with what we were just talking about and that’s criteria of control and knowing there’s gonna be the time and the space and the cooperation to allow the thing to fully manifest — and creating that arrangement by which something can become what it’s meant to be is a very significant part of the medium because there are so many things that can interfere. There’s really powerful and potentially dominating forces when you make a film that can harm it if you’re incapable of orchestrating things. So, I think a lot of it has to do with the negotiation with which you enter into a situation. 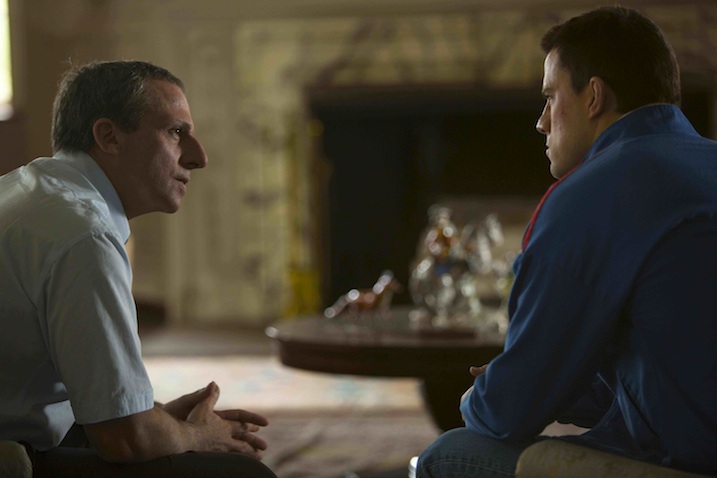 The performances that you draw in “Foxcatcher” are spectacular across the board. This has become commonplace in every film of yours. How has your approach with your actors evolved since your first feature? Or has it?

I’m not sure it has. I think I enter into each situation and each relationship with every actor with an open mind and try to deal with each case as it comes. In this film, you’ve got very different actors with different kinds of experience with different kinds of methods. If there is any consistency with how they’re dealt with, it probably has something to do with bringing an awareness and a sensitivity to all that they do and creating a space for them to really find the character and find the moments. If anything, it’s charging the atmosphere with that kind of sensitivity and respect for acting. That has an effect on everybody. I wouldn’t say that I’m particularly great at giving a direction, like a particular direction that will help an actor get to a place. I don’t know if I’m extra good at that or not. But, I do value performance so highly and put so much stock in it that there is a commitment to stay in a room until we feel like we’ve gotten it one way or the other.

So much has been made of Channing Tatum digging so deep that in that scene where he’s bashing his head into the mirror, he got so carried away that he got injured. Do you ever have instances on set when you’re worried of your actors going too far, or do you like to witness that type of commitment on a project you’re working on?

No, not really. Everyone is professional. So, it really is about storing things up so things can be unpredictable and so things can be spontaneous. That there is an improvisational and very alive spirit as we work, which has the element of chaos and is somewhat uncontrolled. But, it’s a controlled kind of chaos. I think everybody knows what we’re doing and there’s just a way of getting loose and exploring. If ever there was a moment that things might have gone too far, it was the scene that you just described because after it happened, and we only did one take, we did not even attempt a second take because after that happened it was pretty clear that he could have gotten hurt. He had gotten lucky.