Why 'Mockingjay, Part 1' and the Penn State Documentary 'Happy Valley' Are Kind of the Same Movie 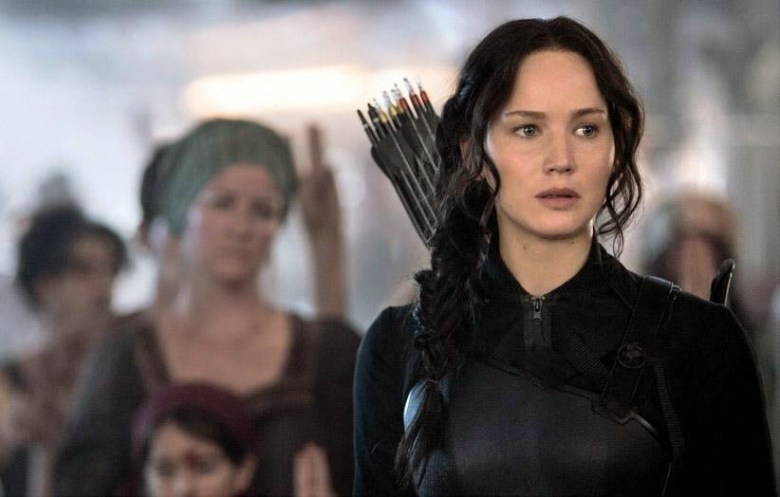 Whatever its merits as a book — and I’m among the small group of people who think it’s actually pretty good — Suzanne Collins’ “Mockingjay,” the third part of the Hunger Games trilogy, pulls off a conceptual coup, effectively turning the entire series inside-out. Both on paper and on screen, the first two books depict a dystopian society where the human struggle for survival is served up as popular entertainment — entertainment that both “The Hunger Games” and “Catching Fire” themselves dutifully provide. But there are no Hunger Games in “Mockingjay,” and it becomes clear that rather than being rescued from the clutches of the totalitarian Capitol, Katniss Everdeen (Jennifer Lawrence) has merely been repurposed. As a competitor in the games, she served as a symbol of the Capitol’s domination of the outlying 13 districts; as a resident of District 13, the militarized hub of a dawning revolution, she is still a symbol, this time one of revolt rather than submission.

With the climactic battles left for next year’s final film, “Mockingjay, Part 1” is largely concerned with the transformation of Katniss Everdeen from popular hero into revolutionary figurehead — strange stuff for a franchise blockbuster, but still plenty engrossing thanks to Peter Craig and Danny Strong’s canny script. The process takes place under the watchful eye of Plutarch Heavensbee (Philip Seymour Hoffman, in his final role), a former Gamesmaker who now turns his attention to what he calls “propos” — a fittingly evasive nickname for wartime propaganda videos. When it’s unveiled midway through the film, after much wrangling on Plutarch’s part, the first successful propo looks uncannily, and deliberately, like a movie trailer: The words “Join the Fight” slam onto the screen one at a time, each accompanied by a bass-heavy whoosh designed to make rising up against the Capitol seem thoroughly kickass.

Whether through coincidence or canny counter-programming, “Mockingjay, Part 1’s” focus on how the exigencies of movement-building warp even genuine heroism makes for a surprisingly apt companion piece to another movie opening today: Amir Bar-Lev’s “Happy Valley,” which investigates the response to the child sex abuse scandal in the Penn State football program. Before the NCAA eliminated 14 years of games from Penn State’s record, Joe Paterno was the winningest coast in college football history, and to fans across Pennsylvania and around the nation, he was more: a role model, an icon, a hero. “JoePa” could do no wrong, and even when he quite plainly did, his acolytes refused to acknowledge them. Paterno didn’t know that a graduate assistant had seen his assistant coach, Jerry Sandusky, abusing a 10-year-old boy in the locker-room showers; or if he did know, Paterno fulfilled his duty to report it, and whatever actions were or weren’t taken thereafter were not his responsibility. In “Happy Valley,” the nickname given to the area around State College, Pa., Paterno was a saint, and nothing could or can change that.

“Happy Valley” is the third documentary in a row Bar-Lev has made about people swept up in, and sometimes eclipsed by, the public narrative of who they are. In “My Kid Could Paint That,” a four-year-old girl is hailed as a abstract-art prodigy, even as suspicions mount that her father and not she is the one putting brush to canvas. In “The Tillman Story,” a football player who quit the NFL to join the Army after 9/11 becomes a posthumous symbol of patriotic dedication, and the U.S. government purposefully covers up the fact that he was killed not by enemy insurgents by by his own comrades in arms. As Bar-Lev told me at Sundance, the movies are about what we need others to be. “My Kid Could Paint That,” he explained was about “genius.” “The Tillman Story” was about “hero.” For “Happy Valley,” the word is “father.”

Professional and high-level college sports is one of the arenas where the need to believe that professional achievement and personal character go hand in hand is most intense. That was Paterno’s gospel; he was nearly as proud  of the percentage of his players who finished their four years of college as he was of his win-loss record. But as Will Leitch writes at Deadspin  “Happy Valley” is not really a movie about football, but about the need to believe.

Jerry Sandusky used Happy Valley; his knowledge of its weak spots, where he could use his power and adoration to his advantage, allowed him to be a predator in plain sight. Bar-Lev uses some rarely seen archival footage of Sandusky being profiled by local (and national) media as some sort of saint—often while sitting next to a visibly uncomfortable Joe Paterno, who plainly didn’t like him—or at least a selfless public servant who just happened to coach football, but mostly wanted to save all of the region’s lost children. He was revered as a public hero because this is how Happy Valley wanted to see itself: As the sort of altruistic place where the deified were deified for the right reasons. You can blame everyone involved for this, but what community doesn’t want to be seen that way? What community doesn’t have its local heroes? What community doesn’t want something to believe in?

In a sense, fiction is where we workshop these stories before deploying them in the real world. What’s good about “Mockingjay, Part 1” — and what, depending on how closely it hews to the book, may be great about “Part 2” — is the way it both embodies and genuinely subverts those myths. We see Katniss as a hero, but also as someone whose heroic reputation is built on misapprehension or outright deception, a young woman whose most valuable survival skill is not archery but her ability to win over the audience. That skill is a gift, but it is also a weapon, and one that can be used in the service of profound evil. You can see it in the people who are willing to dismiss the ever-growing number of women accusing Bill Cosby of being a serial sexual predator because of the genius of his stand-up comedy, or because they grew up loving “The Cosby Show”; Cosby made them feel something, and because that feeling cannot be wrong, the evidence that contradicts it must be. Reluctance to believe to worst of others is an enviable trait, but refusing to even consider it in the face of solid evidence is worse than a character flaw: It’s complicity.