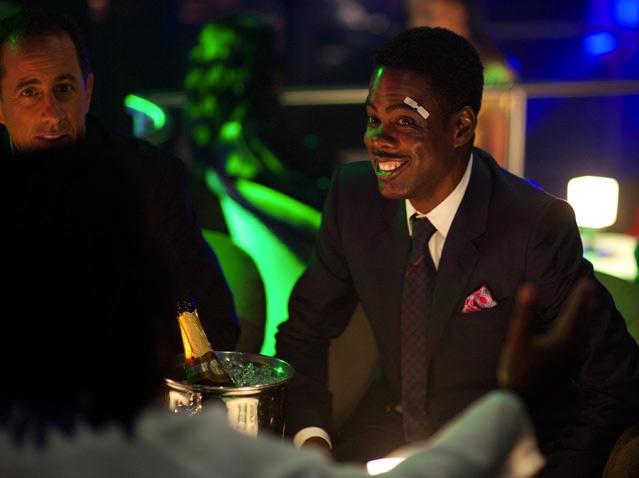 1. Take-Me-Seriously Movies of 2014. “Birdman” made great use of Michael Keaton’s underappreciated status by casting him as an actor who feels underappreciated, but he wasn’t the only case this year. Alison Willmore of BuzzFeed writes about the 2014 films that begged us to take their stars seriously, including the Chris Rock film “Top Five.”

“Top Five” takes place on the opening day of Andre’s new film, a grim biopic about the leader of a Haitian slave rebellion called “Uprize” that’s supposed to mark the start of his new career as a dramatic actor. “This is the kind of stuff I’m trying to get into now — more serious stuff,” he says, but all anyone asks about is when he’ll make another Hammy feature, and when he stops to peek into a theater, he sees that audiences are staying away from “Uprize” in droves. As empty as the cinemas are for Andre’s new movie, he’s had plenty of company on screen in his quest to be seen as a significant talent, one who’s not just churning out commercial hits but whose work is meaningful and worthy of praise. Read more.

“The Strange Little Cat,” Domestic Box-Office Gross: $5,885. Forget the cat—let’s talk about this strange little film. Made as an assignment for a seminar taught by the great (now retired) Hungarian director Béla Tarr, the debut feature of Germany’s Ramon Zürcher depicts an ordinary day in the life of an ordinary middle-class family, observing as Mom putters around the kitchen and kids of various ages amuse themselves. (Yes, there’s also a cat.) Zürcher’s formal approach is anything but ordinary, though. Sounds become oppressive long before their source is identified; compositions carve up space into disorienting fragments; domestic scenes are interrupted by flashbacks that explain nothing, merely adding mystery. More than any other movie in recent memory, “The Strange Little Cat” is a virtuosic exercise in rhythm, creating meaning almost exclusively through precise cuts and contrapuntal bits of business. At times it’s funny, at other times ineffably sad. And it’s over in a brisk 72 minutes, leaving questions tantalizingly unanswered—first and foremost, what will Zürcher do next? Read more.

3. The Prestige Freak Show in “The Theory of Everything.” Eddie Redmayne will likely receive an Oscar nomination for his performance as Stephen Hawking in “The Theory of Everything,” but most of the attention is on his physical transformation rather than his performance itself. Angelo Muredda of Movie Mezzanine writes that this focus is part of a prestige film habit to treat disabilities as freak shows.

Why, then, the fixation on Redmayne’s physical transformation at the expense of his consistency in crafting a character—which is often manifest as a physical consistency at that? Perhaps because it is a winning formula, not just for actors in search of hardware but also for the craftspeople that support them. Or perhaps this rhetoric persists because on the whole we have not yet found a way to speak of disability as a social phenomenon and a particular lived experience, given to the mundane far more often than the tragic, rather than as a sorry physiological state for us to gawk at safely and sympathetically, through the distancing medium of film acting. Read more.

4. The Year’s Best TV Moments (Were Really Bloody). 2014 television was many things, but perhaps most of all it was violent. Empire Magazine took a look at the year’s best television moments, noting that a lot of it was really, really bloody.

“Game of Thrones” spoilers follow. “I shit you not, I can’t get rid of this headache,” tweeted Pedro Pascal on June 2. Thousands of “Game Of Thrones” fans, who had just seen the actor’s cranium being crushed into tomato paste on TV, replied with countless utterings of “Too soon!” and weeping emoticons. The demise of Pascal’s swaggering Oberyn Martell (aka The Red Viper) at the hands of man-beast The Mountain (Hafþór Júlíus “Thor” Björnsson) was so well-executed that it managed to reduce even George R.R. Martin fans, who had seen it coming for years, to blubbering wrecks. Rarely has so beloved a character (Pascal had thoroughly charmed everyone, both in Westeros and the real world, since his arrival at the start of Season 4) been so monstrously dispatched: The Mountain hooks his massive thumbs into The Viper’s eye sockets and squeezes, causing his enemy’s head to explode like a spiked basketball. Anyone got Nurofen? Read more.

5. The Best Movie Posters of 2014. This year brought plenty of great movies, but it also brought a number of great movie posters. Slate’s Adrian Curry picked the best.

“Under the Skin.” Neil Kellerhouse’s ethereal design for my favorite film of the year is notably another big head poster, but also one in which the film’s star is again barely there. Which is more than apt for a film about identity and surface appearances. I also love Akiko Stehrenberger’s unused design for the film, which, while equally ethereal and mysterious, also hints at the film’s more corporeal interest in bodies and meat and blood. Read more.

This Article is related to: News and tagged Birdman, Daily Reads, Game of Thrones, The Strange Little Cat, The Theory of Everything, Under the Skin