Hey Filmmakers, Robert Downey Sr. Has Some Lessons For You 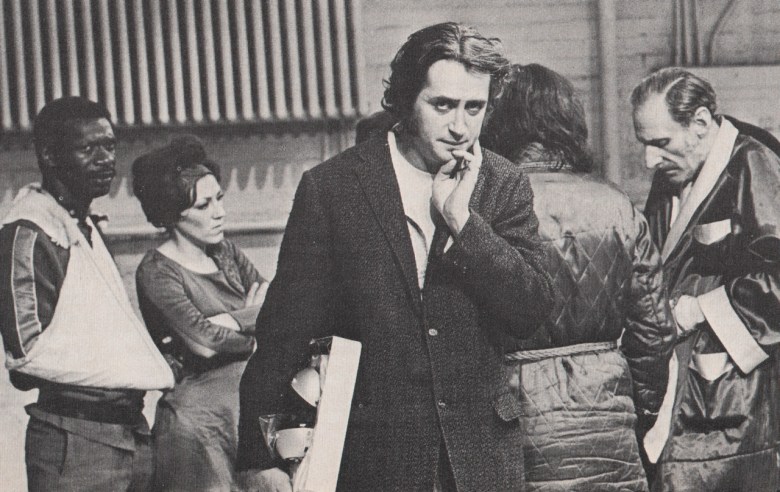 This year, Los Angeles movie theater Cinefamily is holding its annual fundraiser as a four-day retrospective of the filmography of Robert Downey Sr.,
planned in partnership with the underground filmmaker’s world famous
son, Robert Downey Jr.

Everyone knows the actor, but fewer people may know why his father deserves so much attention.

Let’s begin with the FAN-A-WAY commercial.

It’s a scene ripe with paradox — from the first shot of the homeless man sleeping amongst trash in an alleyway to the richly dressed woman, dancing out of a cloud of smoke. An alluring funk track is playing. The woman’s hips sway back and forth. Her arms make half-circle motions. She’s dancing in sync with the music, but she looks almost bored. Perhaps there is no music in her world and we are the only ones that hear it.

Who knows. Does it even matter?

The FAN-A-WAY commercial, from the acerbic 1969 Madison Avenue satire “Putney Swope,” is just one example of the surreal machinations of underground filmmaker Robert Downey Sr., who began making films in New York during the sixties and continues to develop projects today.

It’s not easy to ask to assemble a precise description of Downey Sr.’s oeuvre. As the FAN-A-WAY commercial suggests, you can never be sure of what you’re watching.

“I do think that it’s a sign that he is a real artist in that there
is no easy takeaway from ‘Swope,'” Cinefamily Executive Director Hadrian Belove told Indiewire during a phone interview earlier this week, just a few days shy of the non-profit theater’s annual fundraiser that started Friday.

“I don’t think it can be boiled down to
a single statement and that is partly what makes it good art,” he said. “It’s not
like he went for some easy target or had some easy statement to make. I
think whatever he is saying or feeling is very deeply ensconced and
intrinsic to who he is and his feelings about people.”

Filmmakers and audiences continue to discover Downey Sr.’s work — and sustain its legacy with cult-like adoration — not only because of the enigmatic aspirations of each project, but also due to his fearless embrace of kismet, which has played a critical role in the development of his career.

As a case in point, when Indiewire spoke to Downey Sr. on the phone last week and asked him what he has learned about film distribution since the 1969 release of “Putney Swope,” the filmmaker confessed that he still doesn’t really understand the process.

“I don’t know how you arrive at distribution,” he said. “It’s luck. With ‘Putney Swope,’ nobody wanted that film when it was finished, as opposed to my earlier films that [screened] in Greenwich Village.” Eventually, the movie was shown to Donald Rugoff, who owned several New York theaters. “We showed him the film and he said, ‘I don’t get it, but I like it, so let’s open it in three weeks,'” Downey Sr. recalled.

Combine Rugoff’s blind faith with an endorsement from Jane Fonda and all of a sudden, “Putney Swope” took on a life of its own.

“[Rugoff] picked a great theater and somehow people started coming,” Downey Sr. said. “And — get ready for this — on ‘The Tonight Show,’ Jane Fonda mentioned ‘Easy Rider,’ or Johnny Carson did, and then she added that there is another film around called ‘Putney Swope.’ The next day, this thing had box office around the country wherever it was playing.” 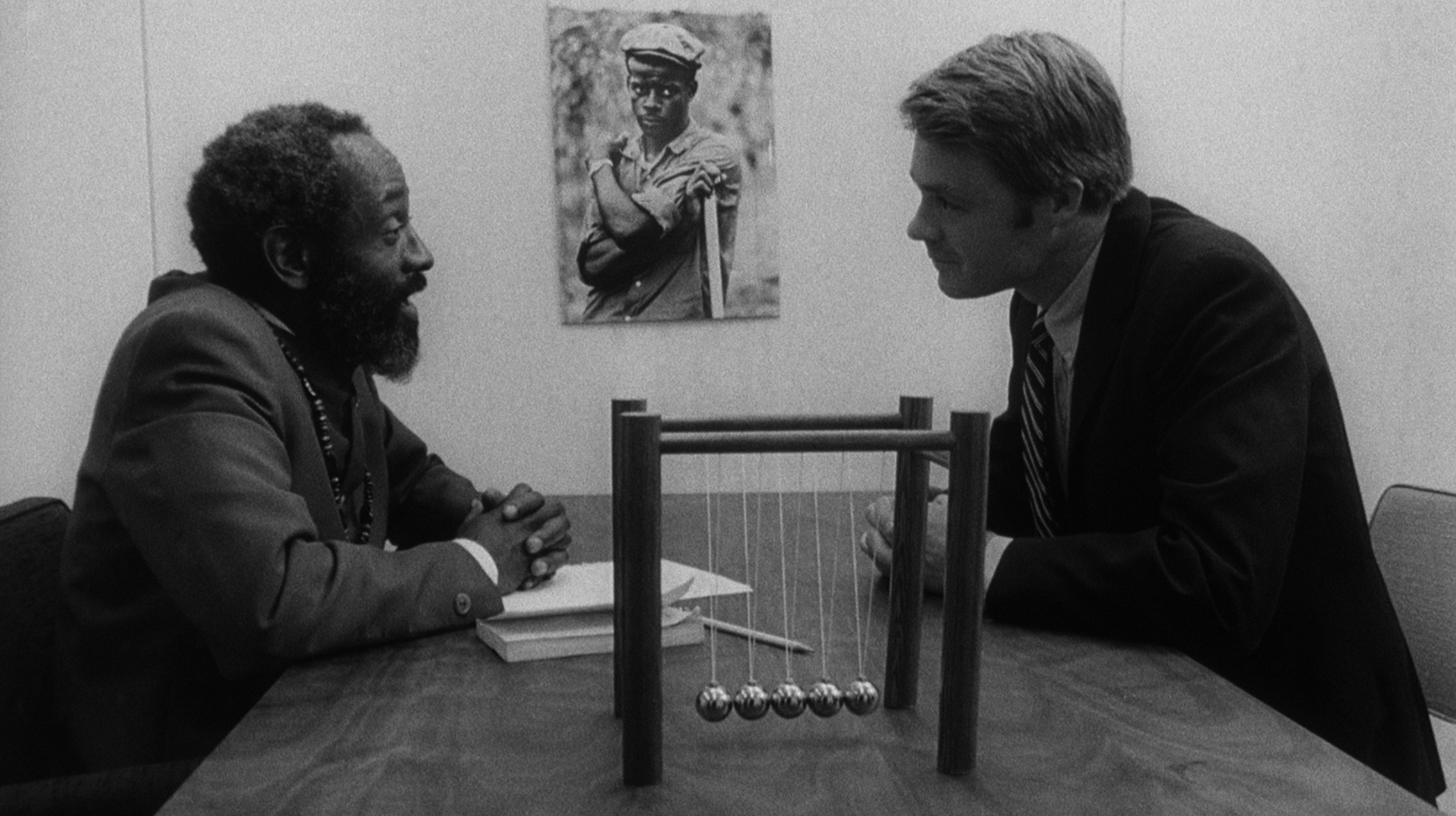 According to Belove, Downey Sr.’s career as a filmmaker must be understood in relationship to the arthouse and underground movie theater circuit in New York, which was in the midst of a Golden Age while was getting his start.

“The Charles theater would have an open film night where locals would show up and show their own stuff,” said Belove “That’s where [Downey Sr.] showed his stuff, where people could discover him [and] those are the movie theaters he went to and got excited about movies.”

The communal origin of Downey Sr.’s filmmaking career is perhaps the most concrete example of his quasi-existential approach to the craft: your idea doesn’t exist until you have something to show for it. In spite of working outside the studio system, he was resourceful at pursuing the completion and subsequent release of his projects.

His lasting reputation has included an induction into the Criterion Collection and now the recognition as Cinefamily’s inaugural “best friend” — a title that Downey Sr. came up with since, he said, he doesn’t feel comfortable being called an honoree.

When asked about his feelings on the emergence of an independent film industry in the decades following his early features, Downey Sr. expressed enthusiasm for the prospects of independent productions.

“I think it gives people who want to make films a way to know that they can do it if they want to — by working very cheaply,” he said. “Because technology [has made it possible to] write something and then do it, which before was not so easy. It was all underground, where you’re just borrowing stuff every second.”

Infrastructure aside, Downey Sr.’s best piece of advice for filmmakers is that they enjoy themselves as they make their films. “Don’t be worried, just have fun,” he said.

He cited Paul Thomas Anderson, an avowed Downey Sr. fan, as one contemporary filmmaker who adheres to the older director’s philosophy. “Paul Anderson is the next wave of what might have been underground recently,” Downey Sr. said. “His work is impeccable. So it’s a pleasure to know him.”

Anderson, moreover, has played a critical role in programming the Cinefamily retrospective that Downey Sr. is traveling across the country via train to attend. In addition to “Putney Swope,” the series includes favorites such as “Chafing Elbows” and “Pound” as well as the more recent “Rittenhouse Square.”

The director expressed as much satisfaction over the films that didn’t make the cut as those that did. “The lousy films I’ve made, usually stuff I didn’t write, or I was the director — whatever that means — are not being shown, so I’m kind of happy with what Cinefamily is doing,” he said. “Robert and Hadrian dreamed this thing up. I don’t know how it happened. So emotionally, I guess the answer is, I’m up.”

More than that, he’s busy. The director is currently developing a new project, having completed a script that he plans to circulate soon.

Asked how much longer he expects to keep up his work, the director sounded especially confident. “I’m not going to stop just because I’m 78,” he said. “Buñuel made films into his eighties and he could hardly see. I hope I don’t run into that problem.”

Cinefamily’s retrospective event on Downey Sr. began on December 5 and runs through December 8. Following the conclusion of the fundraiser,, Cinefamily has plans to screen the newly restored 35mm prints for “Chafed Elbows,” “No More Excuses” and “Greaser’s Palace.”  For program details click here.