TV Writers Rooms on Twitter: A Guide to 16 of the Very Best 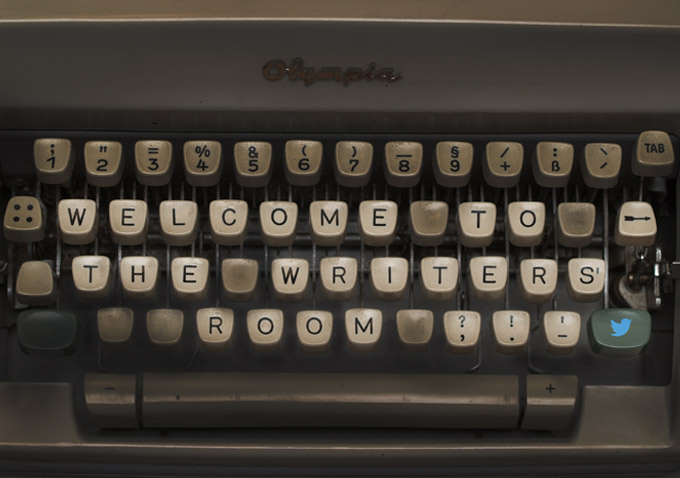 Getting your thoughts across in 140 characters or less is a
task sometimes best left to the succinct—not to writers with mounds of
manuscripts, percolating ideas and wipe boards. Yet over the past couple of
years there has been a quiet surge of writers taking to Twitter and bridging
that gap between TV fandom and behind-the-scenes musings, paving the way for a
whole new type of Twitter account: the writers’ room.

These profiles have popped up uncharacteristically fast,
serving as a hub to bring together rock star showrunners, directors, costume
designers, actors and fans in a way that adds a whole new layer to appointment
viewing. Save that show on your DVR for later and risk missing out on the live
tweets taking place right now on your screen.

When done right, these accounts allow everyday Joe Schmos an
opportunity to delve into the creative minds behind their favorite dramas or
comedies, giving them new insight into the decision-making process, why certain
scenes were shot just so or perhaps where to get that great frock a character
was wearing. When done poorly, at worst they can still serve as a promotional
tool to remind fans when their show is actually on.

As such, we’ve cobbled together 16 of the most popular
writers’ room Twitter accounts currently utilizing the social media service to
their advantage.

This account is among the most diverse of the bunch, with
the writers sharing everything from behind-the-scenes pictures and iterations of Clyde the Turtle,
to inside stories and even “feuds” with other writers’ rooms. The one they
started with
the “Sleepy Hollow” writers back in 2013 was particularly fun, especially when
they challenged them to ping pong. (The whole thing escalated into joke
rivalries over things like costumes and socks.) There’s plenty of fan
interaction too, with the writers hosting Q&A sessions and live tweets,
alongside plenty of pop culture references and retweets from fans and actors.

Spoiler Alert: This is the killer in tonight’s episode. pic.twitter.com/g5tkTBoXbO

Everyone knows “Sleepy
Hollow” fans are hardcore, but this account is a hub where their thoughts
can be in a non-judgmental space. The writers are quick to dole out teasers,
comments and anecdotes around the episodes themselves, but they also live
tweet, answer fan questions, share videos, pictures, fan art and quotes, and
retweet at every opportunity. They’re also keen to interact with other writers –
getting in on the ping pong/costume/sock “feud” with the “Elementary” writers –
and also calling out fun things we wouldn’t otherwise have known happened.

Got a surprise call today from the @BigBang_CBS writers – they thought our PA stole their lunch! Honestly he didn’t, but thnx 4 the call!

“Orange is the New
Black”: @OrangeWriters

When it’s active, this account features fun memes, Q&As
with fans, behind-the-scenes photos and inside jokes from the show, in no
particular order thanks
to its binge-watching nature. Sadly, it seems to be inactive throughout
most of the year for the very same reasons, which means there’s no real point
in following. At time of press there hadn’t been any action since July.

Those looking for extra insight into the Gladiator world
should consider foregoing this account and following EP Shonda Rhimes instead.
But for fans wanting a place to gush about #TGIT or who haven’t filled their
daily quota of exclamation points yet, this is the spot to go. The writers are
great about sharing promotional material, retweeting actors, linking out to
interviews and pushing the overall excitement leading into that week’s episode,
with the occasional live tweets and sidebars to talk about snacks or booze to
break it all up.

Stumble onto this account and you’ll feel like you’re privy
to a conversation between good friends. That’s the vibe the writers here — who
all share their personal Twitter accounts — tend to give off. Behind-the-scenes
photos and jabs litter the page, which is also filled with inside jokes, fan
retweets and dialogue. You need to be a longtime, hardcore fan of the show to
understand most of the action, but most “Castle” fans that would be interested
in the first place pretty much fit that bill.

SH: What you like the fans to know about your episode? TPW: We’ve been wanting to do this episode for awhile… #oldmanwinter

This space holds lots of shoptalk for fans who want that
added layer while watching the series, but is light enough to still be fun.
Directors and editors are showcased throughout along with live tweets, retweets
and photos. There’s actual talk about filming particular scenes couple with fun
nuggets about the show itself. As an added bonus they often retweet the “POI”
directors’ account as well.

This was shot at Bergdorf’s. No actual cosmetics were harmed in the making of this episode. #personofinterest

Plenty of promotional pictures and videos adorn this Twitter
wall, which is then filled out with some fan art, actor retweets, and live
commentary that doesn’t actually tell us much about what’s going on
behind-the-scenes. Those sending out thoughts to the world also seem to have an
affection for emojis. Lots and lots of emojis that are used wherever possible.

“How to Get Away With
Murder”: @MurderWriters

A large part of this account’s strategy seems to be
retweeting comments from fans during episodes, and interspersing them with random
original tweets that “talk” to the characters but give no context if you aren’t
tuning in live. In between there are plenty of fun behind-the-scenes photos
featuring actors, sets and props, but little actual insight into episodic
setups or the decision-making process.

That Asher dance was burnin #HowToGetAwayWithMurder

Thanks to handfuls of retweets, it’s clear the writers in
this room are huge fans of people who binge watch shows. Especially people who
binge watch their show. This feels more like a hub for fans to showcase their
love rather than a space for creative insight, a fact highlighted by the
beautiful fan art that’s often showcased. In fact the account itself tends to retweet
more than actually tweet, except for during Q&A sessions with fans.

“@RenaeSeffernick: Starting watching #The100 this week. I’m on S1E3 and I’m still not sure. Is it worth it to keep watching?” We say yes. ��

If you’re looking for a place to hang out with people who
are as excited about watching a woman exact revenge on her enemies as you are,
this is the space for you. The content is akin to binging on empty calories
rather than eating a full meal, but there are plenty of fun pictures,
promotional materials and abstract hashtags to go around.

Our advice? Brace yourselves.

Those manning the account seem to have grasped what fans of
the show are looking for online: behind-the-scenes tidbits, pictures and fun
rivalries. When “The Tomorrow People” still aired, the account took them to
task at every opportunity. Now there’s a fun rivalry with “The Flash” account
that not only cross-promotes, but that also asks fans questions like, who would
win in a pie-eating contest. In fact, there are many tweets about food and
snacks, but there are also plenty of shoutouts to loyal fans and links to the
account’s Instagram account too.

The #ARROWwriters wish you all a happy pre-Thanksgiving with pumpkin and chocolate pear! #ARROW… http://t.co/qsnzKOIciD

A definitive space for fans, as it translates the
show’s artistic look and feel online via art, behind-the-scenes photos and
bloody images. At the same time many of the tweets offer an inside look at
production that humanizes all of the writers and makes everything feel like
life as usual. Office spaces, production personnel and even dogs are often
featured. There’s plenty of fan interaction too, with the account even retweeting
some of the best Hannibal Halloween costumes from late October.

Lou and Henry attempt to reenact the #hannigram pillow in the #hannibal room. pic.twitter.com/juJviTdVb2

A must-follow for any fan of the intense drama, this account
does a bang-up job of live-tweeting episodes with real insights into the
production behind any given scene. It features a collaborative mix of quotes,
memes, interview links, creative shout-outs and videos, and feels more like a
discussion than a promotional vehicle. It can be literary or meta at times, but
then again so can the show. Added bonus: those manning the tweets are never shy
to show their fandom alongside viewers, openly gushing about performances
whenever appropriate.

Mike Colter originally said “WHAT THE FUCK DO YOU THINK YOu’RE DOING” Had to put “hell” in his mouth. #TheGoodWife

The writers helming this space are as new to the account as
the show is to audiences, so right now they’re doing a little bit of everything:
retweeting, linking, quoting and trying to build momentum ahead of airdates
with promotional material. But this is also a show that knows the audience it’s
trying to attract, and is aiming for young females with plenty of
behind-the-scenes info on where to get some of the clothing featured on the
show. Unfortunately, there are no photos or videos to ever accompany them. In
fact the only time multimedia is used is via retweets.

Like dogs, birthday shoutouts and behind-the-scenes photos?
This is the account for you. There’s a missed opportunity to link up some
of the songs featured on the show, or even to have discussions about the
technicalities that go into making this type of television, but the writers do
a good job of interacting with fans. Between the hype they also take time to
comment on what’s going on in particular scenes while giving kudos to writers,
directors and actors.

In this moment, Avery’s reminded of the electricity of their connection. Nice performance, @JonathanJackson! #Nashville

It’s hard to run a Twitter account that live tweets a show
when that show doesn’t get a chance to air. That’s the message the “CSI”
writers have sent with this space. When it is able to fully go for it, however,
there’s plenty of discussion, clarity about airtimes (which is actually needed
here), and fun interaction with other writers’ rooms. This is the same account
that once suggested writers from “Sleepy Hollow” and “Elementary” team up with
them to
take on “American Horror Story.” It’s also the same account that tweeted
out a Halloween pic of the writers
dressed as four clones from “Orphan Black.”

Tonight’s live tweet has been cancelled, since we’re no longer airing on the east coast. Sorry everybody! #footballsucks

Have a favorite account we overlooked? Tell us in the comments!

This Article is related to: Television and tagged Castle, CSI, Elementary, Gotham, How To Get Away With Murder, Orange is the New Black, Scandal, Sleepy Hollow, The 100, The Good Wife