Watch: The Beginner's Guide to 'Friends' — 12 Tips for the Netflix Generation 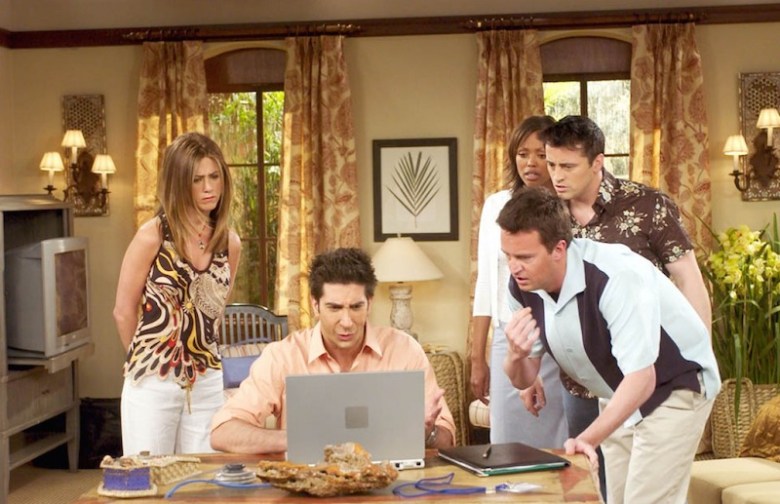 “Could we be making a bigger deal out of this?”

That, my friends, is a riff on the classic Chandler Bing catchphrase from “Friends.” If you didn’t already know that, this guide is for you. As disheartening as it is to report as it was to personally accept, the best relationship sitcom of all time ended more than 10 years ago. On May 6, 2004, Chandler, Joey, Ross, Rachel, Phoebe and Monica left our lives forever with a last episode for the ages, marking a 10-year run never lacking in heart or humor.

Yet for as widely relatable as the show’s focus remains, there are plenty of elements possibly fatal for new fans. Let’s face it: most of the nation’s youth grew up without a new episode of “Friends” airing every Thursday night on NBC. Even someone born on the day “Friends” began would have spent most of his or her TV-watching life without easy access to the wildly-popular sitcom — what 14-to-20-year-old do you know who watches DVDs, TBS, or even traditional television on a regular basis? They buy shows on iTunes, torrent episodes they don’t want to pay for (tsk tsk, you thieves) or log into their parents’ streaming services. Even though “Friends” has been available for those willing to seek it out, kids don’t want to watch what their parents think is cool. They want to discover things on their own.

Now they can. Every season of “Friends” will be on Netflix starting January 1, ready and waiting for young romantics to discover in its entirety — and we want to make sure they’re ready. Like that proud papa who’s finally able to screen his favorite show for his children, we’re excited to share these 12 tips for Central Perk newcomers in the hopes you’ll grow to love it as much as we do.


You’ve probably heard a lot of older people in your life talk about sitcoms. Sadly, they were probably talking about “The Big Bang Theory,” “Two and a Half Men,” “2 Broke Girls” or some other lesser — though technically accurate — example of a sitcom. Hopefully you were able (or forced) to watch a real sitcom like “Cheers,” “Seinfeld” or “I Love Lucy,” thus not spoiling the genre for you entirely — after all, the word “sitcom” stands for “situational comedy” and those CBS shows are missing the latter ingredient. Sitcoms are terrific when done well: Only 22 minutes long and featuring little camera movement as to allow the performers ample room to, you know, perform, the format works surprisingly well when the actors are as magnetically appealing and talented as the “Friends” cast. Jennifer Aniston, Matthew Perry, and Matt LeBlanc specifically are instantly likable, a trait “Friends” took full advantage of for 10 charming seasons.

2) Laugh tracks are weird, but you’ll get used to them.


When someone makes a joke in modern television — or in everyday life, for that matter — no one laughs. Not out loud. Sure, if the joke is particularly amusing, your friends might let loose a chuckle. But TV characters won’t, no matter how funny the well-conceived, written, and executed joke may be. This was not the case in the old days. Back when “Friends” was being made, episodes were recorded in front of a live studio audience who were all well-prepped to laugh at every punchline (and sometimes at nothing whatsoever). So when you watch “Friends,” you’ll hear their giggles and guffaws throughout the episode, guiding you to laugh even if you don’t feel like it. Though it may seem a little bizarre, think of it as having your friends around while you binge-watch the series alone on your futon in the dark. It’s a warm feeling, and it will soon wash over you. Just give it time.

Guess what? There are famous people on “Friends”! I’m not just talking about Jennifer Aniston, who you probably know from… “Just Go With It”? “Horrible Bosses”? This year’s Oscar bait “Cake”? Either way, she’s not the most famous face to pop up on the show. Brad Pitt, Reese Witherspoon, Robin Williams and more make guest appearances on the sitcom, and when they do, you’re going to hear… applause. Clapping, whooping and genuine fervor can be heard and felt resonating from your TV when special guest stars arrive, as if God Himself was showing His appreciation for seeing their smiling faces. Now, this might happen for people you may not recognize, as well, so just assume that whoever shows up to the sound of a standing-O was a big deal at some point, even if their fame didn’t last. Remember Freddie Prinze Jr.? Yeah, neither do we.

4) Will you look at those clothes!


Considering how quickly fashion trends shift, “Friends” has held up relatively well over the course of 20+ years. The clothes are an odd mix of terrible and ‘90s era cute, with Chandler being the consistent Worst Dressed winner and Rachel, unsurprisingly, taking home Best Dressed.
Though you may immediately recoil in horror at the faded denim, backwards hats, sleeveless vests and lengthy untucked button-downs, do not be turned off by the men’s giant shirts and baggy jeans. Do enjoy the ladies’ commonly utilized comfy clothes. It only gets better as you keep going.


You can ignore everyone’s hair except Jennifer Aniston’s, who you will soon know as Rachel. Matthew Perry sports an okay haircut throughout most of the show, and Matt LeBlanc is also fine after Season 2 (mostly) — even Courtney Cox and Lisa Kudrow don’t do anything too egregious by today’s standards (with a few diegetic exceptions). But Aniston became a hairstyle icon because of “Friends.” Despite being created by her stylist while stoned, Aniston’s ‘do in Season 2 is still popular today. She has a variety of attractive,chic cuts throughout the series, so take your time to study them all and pick a favorite. (We like Season 6 — shown above — with the classic cut a close second. Check out the video in No. 11 for a better look at “The Rachel” from Season 2.)


Don’t expect to see any tablets or even an iPhone in “Friends,” as the landmark Apple device wasn’t released until 2007 (I know, that’s so long ago). Cell phones do pop up in the later seasons, but their absence is hardly noticeable — this group is so close they’re rarely far enough apart to need phones to communicate, and the writers never draw attention to quickly-dated technology. Oh wait. Yes, they do.

Music, airports and barcaloungers are still to come on Page 2.


When Joey and Chandler get a TV that “appears as if from nowhere,” it’s a big deal. I know the thing looks like a weird set from the ’40s, but that was the high standard of living — TV-wise — in the ’90s. Just be thankful you’re not binge-watching “Friends” on something that small and round (unless you’ve got the new iPhone, that is).


Those black rectangular block things the friends keep putting into larger black rectangular block things under the TV? Those are VHS tapes, and those would be how you’d watch “Friends” right now — or wouldn’t be watching “Friends” — had digital technology never come around. Not only would you have to manually find the tape, insert it into the VCR, and rewind or fast forward to whatever episode you wanted to watch, but you’d have to hope against hope the tape hadn’t been used too many times or it wouldn’t work at all. Modern technology has offered many blessings, but none are more appreciated by millennial children than the invention of DVDs (which soon led to streaming video).

9) Some technology, though, is cross-generational.


I’m not sure if you know what a “mixtape” is, but if you do, you probably think of it as something digital, either on a playlist via Spotify or a CD…are CDs still a thing for youngsters? Probably not. Well, before playlists and before CDs, there were cassette tapes. People would actually sit around listening to the radio — like Pandora but through a box with an antenna — and record songs as they randomly came on the air. If you liked a girl, you would make her a mixtape of all the songs that tell her how you feel. You probably do that now through coded Tweets or GarageBand. Chandler tries to do it for Monica using an old tape he found at random…and well, that’s a bad idea. Anyway, the point is that the idea behind the mixtape crosses generational barriers. Everyone has made one or made something with the same spirit behind it. You’ll discover many commonalities between your life and those found on “Friends,” hence the beauty of the program — this one just took a little extra explaining.


Speaking of music, Hootie and the Blowfish was an incredibly popular band during the ’90s. Their 1994 debut album is the 16th-best-selling album of all time, they’ve sold more than 21 million albums in the U.S. alone and you’d be hard pressed to find anyone over the age of 25 who doesn’t still immediately sing along to “Hold My Hand,” most likely imitating the distinct, baritone voice of lead singer Darius Rucker. Is that name familiar to you? You may now know the man many referred to as “Hootie” as country star Darius Rucker, but trust us — Hootie was a much bigger deal. Other bands mentioned by the Central Perk gang may not be as memorable (or important): George Michael and Wham!, for instance, brought us one unforgettable hit, but nothing else of note.

11) The world is a darker place than it was before “Friends.”


A year before “Friends” went off the air, a movie of equally bright spirits and good intentions became the surprise hit of the holiday season. “Love, Actually” was and is all around, as the Richard Curtis-directed romantic comedy has since become a Christmas classic. In its memorable opening and closing moments, the film shows families, friends, and loved ones meeting outside the security gate of the London airport. The reason this happens at the security gate rather than the boarding terminal is because “Love, Actually” was made two years after 9/11, and airport security had tightened. Prior to that fateful day, you could actually make your way all the way to the boarding ramp without a ticket for the flight. So don’t freak out when any of the “Friends” make their way willy-nilly through the airport. They’re just living in simpler times, as can be seen on Rachel’s innocent, hopeful face in the clip below.


“Friends” lasted for 10 seasons and 236 episodes, more than 5,000 minutes in all. That’s a lot of bingeing (more than 86 hours), so settle into those barcaloungers, folks. “Friends” is how TV was meant to be made, and now it can be enjoyed as was always intended — uninterrupted.

This Article is related to: Television and tagged Friends, Lists, Netflix, Television