6 Great Insights From George Lucas at the Sundance Film Festival 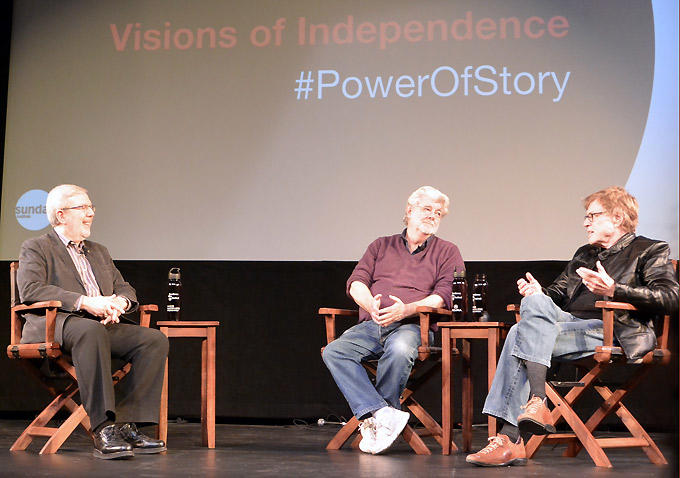 It may sound weird now, but when George Lucas made “Star Wars,” he was taking a big risk.

In Park City for the Sundance Film Festival yesterday, Lucas joined Robert Redford and moderator Leonard Maltin for a panel discussion entitled “Visions of Independence.” While Lucas’ name may be synonymous with commercial success, he made a number of salient points that reflected his independent past. Here are some of the highlights. Check out Matlin’s recollections from moderating the event here.

Initially inspired by the experimental film scene in San Francisco during the late 1960s, Lucas had no interest in making big studio projects. “I wasn’t really into dramatic filmmaking at all,” he said. “We hated the establishment. I didn’t like the studios. I was very much against all that.” Some of that skepticism is still with him today. “I grew up in the era of ‘Don’t trust anybody over 30,'” he said, “and I still believe that.”

The distributor for Lucas’ far-out debut feature took issue with the movie’s stranger segments, but strangely insisted on cutting out just five minutes. “You can’t understand it anyway. Why are you trying to shorten it?” the director recalled asking the studio heads at the time.

“American Graffiti” was not designed as an on-ramp for “Star Wars.”

Lucas made “American Graffiti” only because of he was already running a production company with Francis Ford Coppola out of San Francisco. After they completed Lucas’ ambitious first feature “THX 1138,” Lucas was drawn to another project that gelled with his sensibilities. At the time, he wasn’t considering a move toward the massive spectacle that eventually became “Star Wars.” “I had no interest in science fiction,” he said. “I spent my whole life driving cars.”

The technological innovations of “Star Wars” came together by necessity.

Lucas pushed for greater technological resources on the “Star Wars” franchise, he said, for one specific reason. “I had a problem: a story I wanted to tell,” he explained. “So I went an found the technology to do it. In the process of making ‘Star Wars’ there weren’t any visual effects houses so I had to event one.” He felt that in order to make the movie on his terms, he needed “to be able to have your imagination go wherever you want it to go.”

He feels strongly about the need for filmmakers to think beyond box office.

“I’ve got news for you,” he said. “Movies don’t make money.” In the case of “Star Wars,” Lucas received only $150,000 as his director’s salary. But he owned the sequel rights and produced “The Empire Strikes Back” independently. That also allowed him to profit off the franchise in other ways. “Anybody who invests in movies is a sucker,” he said. “All the money is in the action figures. Once you own the movie, you make a lot of money.”

The director referred to the large scale spectacles made today as “circus movies,” while admitting that “I get blamed for a lot of that.” He’s also skeptical about technological innovations that don’t serve a specific purpose. “A lot of the stuff about new frontier is overhyped,” he said. “I never would have anticipated 10 years ago that now people would be staring at screens watching cats do stupid things.”

This Article is related to: Festivals and tagged George Lucas, Sundance Film Festival