Daily Reads: The Politics of 'Parks & Recreation,' 10 Original Blockbusters in 2015 and More 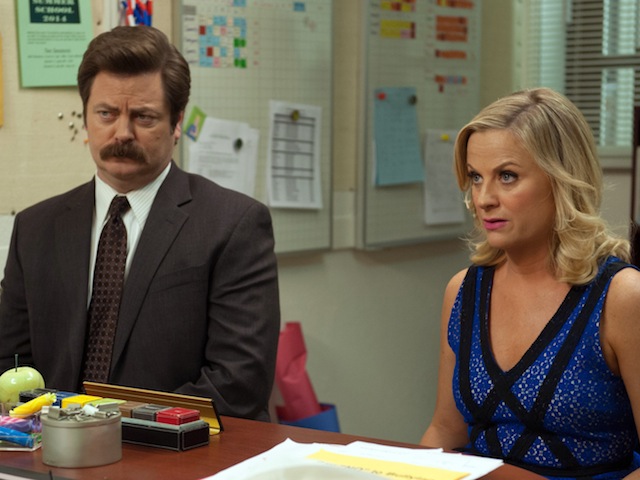 1. The Politics of “Parks & Recreation.” “Parks & Recreation” is one of the funniest, warmest shows on television, but it’s also one of the most politically revolutionary shows around because it’s about people with opposing views being forced to work together. The Huffington Post’s Maureen Ryan spoke with co-creator Michael Schur about the politics of the show.

There was a certain amount of liberal fantasy in “The West Wing.” It was like, this was what you’d hope your president would be like, and this is what you’d hope the president’s staff would be like, if you were a Democrat. The point of view of [“Parks and Rec”] was more of an American fantasy, which was like, “Wouldn’t it be nice if the most hardcore, 19th Century Libertarian who has no interest in social collectives in any way, could be in many ways be very close friends but at least have a very deep and abiding respect and admiration for a person who is 100 percent in favor of the government’s active role in people’s lives?” Read more.

2. “The Scorpion King” Marathon. There are four “Scorpion King” movies. Four. I’m not going to watch all of them, but Mike Ryan of Uproxx did it for our amusement.

After, I’d guess, at least 15 close-ups of The Rock’s eyes (“The Scorpion King” does not shy away from closing on The Rock’s face as he’s trying to strategize or think or whatever), the movie ends with The Rock defeating Memnon with a one-two punch of an arrow to the chest as Memnon is also falling into a pit of fire in the most obvious, “That’s gotta hurt!” type way. “The Scorpion King” ends happily enough, with The Rock being appointed a king, looking to live out his life in piece with his love, Cassandra. It’s nice moment, as we fade out to the tender sounds of “I Stand Alone” by Godsmack. Read more.

Heather Donahue: [The worst part?] Hard to pick. People being angry at you for being alive. This overarching feeling that it would have been more convenient for people if you were actually dead. The realization that giving an honest performance actually kind of shot me in the foot. I should have stopped and put mascara on, I shouldn’t have worn layers. That kind of thing. Read more.

4. Editing in “The Immigrant.” Many have argued that James Gray’s “The Immigrant” deserves consideration for the Oscars’ Best Cinematography category. They’re right, but The A.V. Club’s Ignatiy Vishnevetsky writes that its editing is just as deserving.

The shot is held just long enough for the viewer to stop looking at Ewa the way they look at a screen, and begin to look at her the way they would a person sitting across the room. They anticipate the moment when she’ll make eye contact with the camera. And just as they think she’s about to do it, the reverse angle interrupts. But it’s not a shot of Bruno staring. Instead, an out-of-focus extra passes like a black smudge in front of the camera, meaning that a split second passes before the viewer sees Bruno settling into a bench, his eyes fixed on that point off-camera where Ewa should be. Through perfect timing—a matter of frames, really—this single cut immerses the viewer in Bruno’s perspective without them even knowing it, allowing them to spot Ewa just as he spots her. At the same time, the extra passing in the foreground allows the audience to discover Bruno. Read more.

5. How to Stop Worrying and Be Okay With the Golden Globes. If the Oscars are a sham, the Golden Globes are a sham of a mockery of a sham, but that’s no reason why they shouldn’t be fun. RogerEbert.com’s Glenn Kenny wrote about how he learned to be okay with the Globes in 2015.

The reason is idiotically, even arguably venally, simple. In the categories I cared about, my guys won. Multiple awards for “Boyhood,” the number three film on my 2014 Top Ten List. Multiple awards for “Birdman,” number seven on my list. A mildly surprising award for “The Grand Budapest Hotel,” my number four. No, I’m not high on “Whiplash,” but I love J.K. Simmons…Yeah, I think “The Theory of Everything” is a crock and I think Eddie Redmayne’s performance, while virtuosic, is rather shameless in its telegraphing—still, Redmayne’s win, combined with Julianne Moore’s victory with “Still Alice,” set off a social media semi-frenzy of gifs from the incestuous Redmayne/Moore threesome (with Hugh Dancy) from 2007’s “Savage Grace,” so that’s something, particularly if you’re into indulging the more adolescent side of your sense of humor. So even when I wasn’t entirely happy, I discerned nothing to get angry about. Read more.

6. Ten Original Blockbusters in 2015. This year sees “Avengers 2,” “Taken 3” and “Furious 7,” but it’s not all sequels and franchises. Scott Mendelson of Forbes picked out ten original potential blockbusters this year.

“Tomorrowland” (May 22nd) Walt Disney. Brad Bird could have done basically anything he wanted after making his live-action debut with the $694 million-grossing “Mission: Impossible – Ghost Protocol,” and that’s precisely what he did. He did not end up directing the next “Star Wars” film or “Justice League,” but rather he ended up fashioning what is one of the great original hopes of 2015. Little is known (or at least I’m not spilling anything) about this fantasy adventure starring Britt Robertson and George Clooney.  The plot somewhat involves a variation on the Walt Disney “tomorrowland” theme parks and somewhat of a “young girl finds the key to a magical world” type narrative. By the way, yes it’s worth pointing out that this is another big-scale blockbuster that has a female lead for not explicit reason, which is always appreciated.

After months of mulling it over, here are my Oscar predictions!
–He will not leave his trash can
–He will continue to antagonize Big Bird

This Article is related to: News and tagged Daily Reads, Golden Globes, Manhunter, The Immigrant