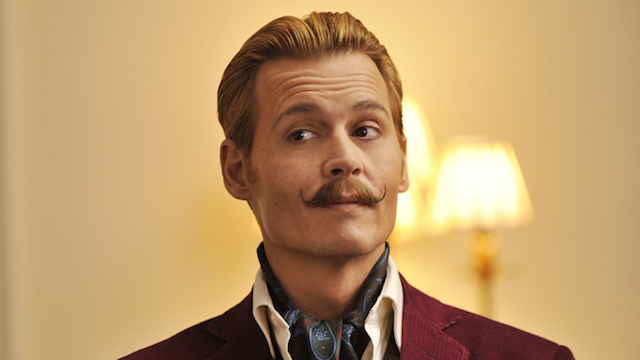 With an advance publicity campaign so aggressively ubiquitous but utterly opaque that it prompted Vulture’s Abraham Reiseman to wonder “What the hell is ‘Mortdecai,’?” the impending train wreck that is Johnny Depp’s farcical caper has been a train wreck you could see coming for miles. Though most American critics won’t get their first view of it until this evening — press screenings overlap with the first public showings, which is almost never a good sign — foreign-based scribes have had a feature-length look at Depp’s Charlie Mortedecai, a foppish swindler who’s pressed into doing genuine good by an old school charm. The verdict: Well, one critic calls it “psychotically unfunny,” and was so aghast at the film’s tone-deaf attempts at humor that he compiled a list of its 10 worst jokes. Others are a little more charitably inclined, but not much, and all agree that Depp is scraping bottom, taking a cast including Gwyneth Paltrow, Ewan McGregor, Paul Bettany and Jeff Goldblum along for the ride. If there’s one consolation, it’s the suggestion that at least movies in 2015 have nowhere to go from here but up.

It’s hard to think of a way in which the experience of watching the new Johnny Depp film could be any worse, unless you returned home afterwards to discover that Depp himself had popped round while you were out and set fire to your house. This is comfortably the actor’s worst film since “Alice in Wonderland,” and even dedicated fans will find their hearts shrivelling up like week-old party balloons at its all-pervading air of clenched desperation.

On the page, Mortdecai and Strapp are clearly uncouth cousins of P.G. Wodehouse’s Jeeves and Wooster. On screen, their boorish mannerisms and retro attitudes owe more to Austin Powers. But while Mike Myers found rich humor in the gap between a chauvinistic past and politically correct present, much of the labored comedy in “Mortdecai” relies on dated stereotypes unredeemed by any hint of post-modern irony. Women are insatiable nymphomaniacs who enjoy being groped, Americans vulgar materialists, Brits upper-class dimwits, and so on. These caricatures are too crude to be offensive, but also too stale and lazy to be funny.

Directed (but, unusually, not written) by an off-form David Koepp, the film shoots for the swinging insouciance of ’60s farce, but this story of a caddish art dealer enlisted by MI5 to assist in a knotty theft case is longer on frippery than quippery: There’s a fatal shortage of zingers to supplement its exhausting zaniness. Only particularly dedicated devotees of Johnny Depp’s latter-day strain of mugging — here channeling Austin Powers by way of P.G. Wodehouse — will delight in this expensive-looking oddity. Depp has entered a realm of performance so self-amused, one imagines most co-stars would struggle to forge chemistry with him. Resplendent with eccentric, Peter Sellers-indebted vocal tics and spasms, his Mortdecai is neither a careless nor an artless creation. But it is, for all its energy, a somewhat airless one — an experiment fostered by a film that’s in thrall to little else.

“Mortdecai,” written by Eric Aronson and directed by David Koepp,is significantly less-terrible than expected, to the point where it does indeed reach the level of “not bad.” That may be damning with faint praise, but after an oddly off-putting campaign that highlighted the allegedly “hilarious” lead character, zero buzz going into Friday’s release, and a utter lack of official press screenings, it is with a spring in my step that I inform you that the new Johnny Depp vehicle is… fine?

Depp and Bettany make an unlikely double act, but the chemistry works. However, behind the camera David Koepp (best known as a writer of thrillers like “Carlito’s Way,” “Mission: Impossible” and Depp vehicle “Secret Window”) isn’t quite sure how to translate the PG Wodehouse-style satire to a contemporary setting. “Mortdecai,” the film, is neither satire nor spoof, instead getting caught uncomfortably in a place where the butt of the joke is difficult to pinpoint. And it seems the star of the film is hiding as well behind those carefully teased whiskers, apparently having tired of the whole acting thing and decided to act the fool instead.

“Mortdecai” is by no means a disaster — the occasional joke lands, and there’s at least some fun to be found in the frenetic farce of all the conspiracies and the running-around (It’s certainly not the fiasco that the recent, barely-released remake of “Gambit” was). Still, I spent most of the movie waiting for it to find its rhythms and set a witty pace for itself that would allow the humor to build and the outrageous situations to pay off grandly.

The jokes here are unfunny and mostly miss their mark. Depp seems to be channeling his inner Peter Sellers but we have seen him sporting such tics and mannerisms so many times before that the performance appears charmless. And that put-on, grating-on-the-ears British accent! There was a time when Depp could leave you overwhelmed by his quirky performances (remember a certain Captain Jack Sparrow?), now the same ‘strange’ is becoming plain annoying and formulaic.

Everything, from the accents to the mannerisms of the title characters, is impeccably British to the point of parody. The film is paced well but unfortunately, a lot of the jokes fall flat. The film simmers but never really sizzles, despite moments of potential. Mortdecai’s stiffly waxed moustache stays unruffled through car chases and fist fights and shades of Jack Sparrow clearly creep in many times, especially when it comes to Depp’s by-now familiar sozzled-and-swaying screen routine. While the script is lacklustre, it is only Depp’s talent that keeps this film afloat.