Gillian Anderson on Owning Feminine Sexuality in 'The Fall' 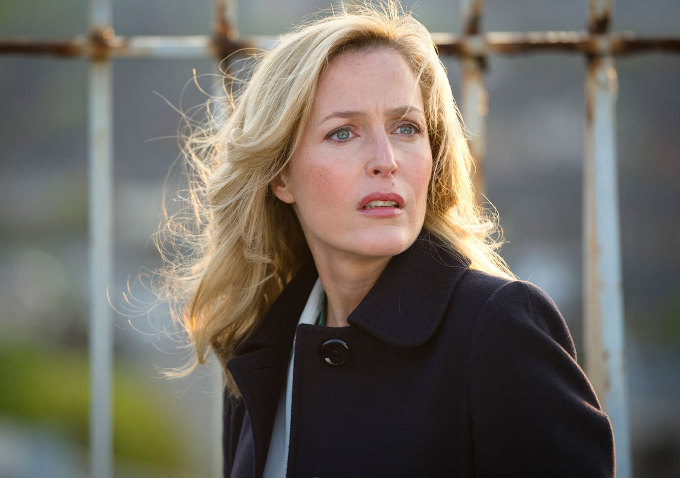 While I was prepping for this interview, someone brought to my attention that there is a Goose Island beer named after you.

[Laughs]. Well, it’s named after Scully I think. Or is it me?

There was a Scully, but there’s a second beer now called Gillian.

Oh, wow! And it’s got strawberries in it or something, is that right?

They need to make a blonde one because now I’m blonde. A blonde ale.

That came about because you used to work there right?

Yes, I did indeed.

I bring it up because it’s one of those fascinating questions — when you were working at Goose Island, did you ever foresee ending up in the position you are today?

At the time I was studying acting at the Dublin Theater School Conservatory, and my dream, as I’m sure it is with most actors, was that I’d be working professionally and being known amongst the world. That’s all a part of the fantasy, right? But I also wanted my work, whatever it would be… I mean originally my interest was only in film, so in those mediums… on some level there has to be enough of an ego to keep you going to think that maybe your name will become a household name. So if I was contributing to that fantasy in any way, I guess part of that fantasy might include someone naming something after me. [laughs] There’s a lot of ego involved in that particular thought pattern. 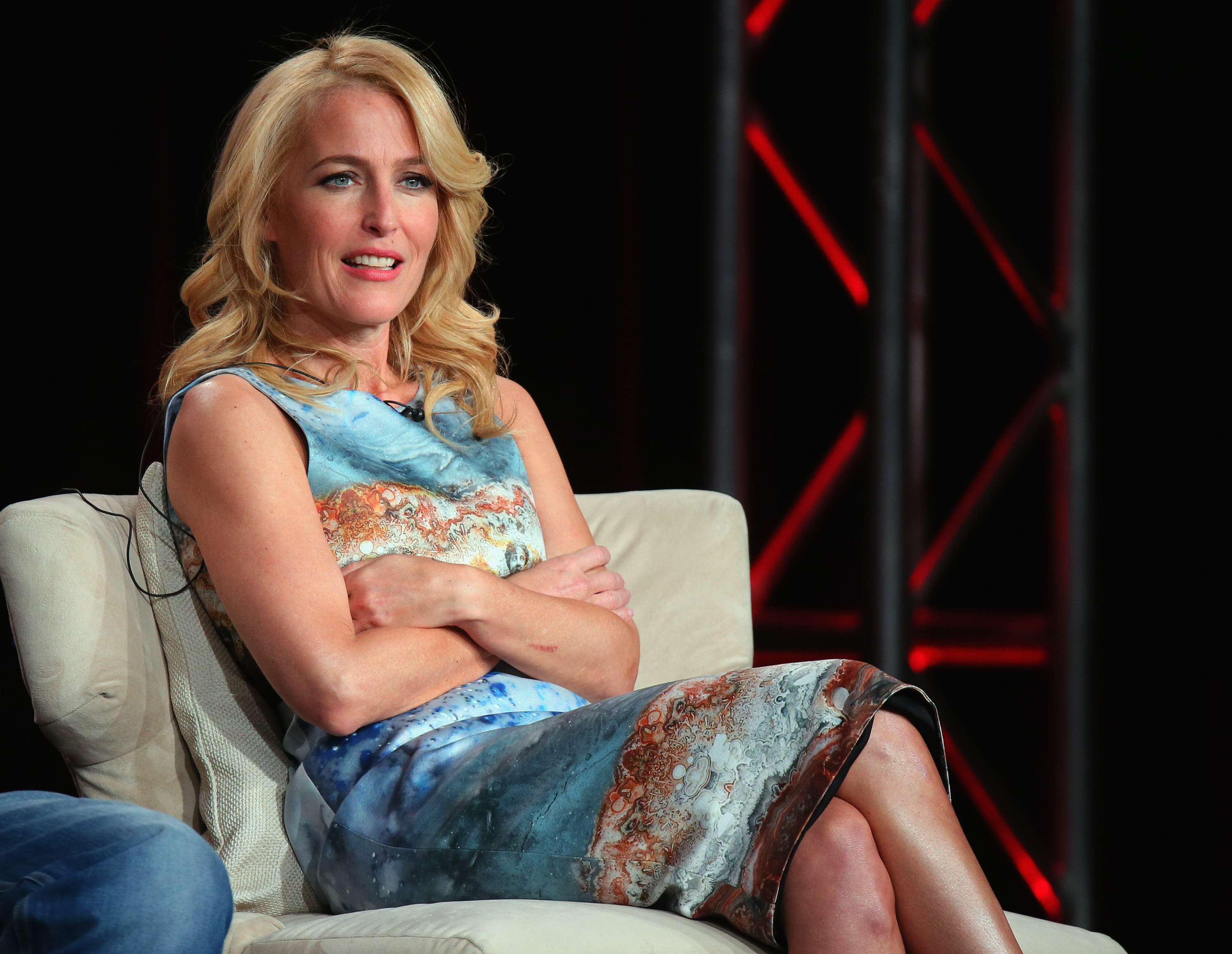 Would you say that working in the UK has been a goal of yours?

Oh, definitely. Always in the back of my mind, I had — and I don’t know how much of it is because of growing up there or because of the particular types of material that I felt that I responded to or felt I had a kinship with — but I always wanted some part of my adult professional life to entail doing that type of stuff, and that type of stuff was generally done there in the UK.

When we moved to the US we weren’t going to stay — our plan was always to move back. My parents loved London, and the trip to Michigan was going to be a relatively short thing and our dream was always to go back. The fact that my mom is still in Michigan was not part of the plan! [laughs]

I guess in the back of my head I always wanted to. At the start of “The X-Files,” somebody called me out of the blue, who I had known as a child and told me that when I was 16 I had told them that whenever they sold their flat, I would buy it from them. And when I was 24 or 25, they called me saying, “We’re selling our flat! Are you still interested?” So that fact told me that, even in my mid-to-late teens, coming back to the UK was always a part of my plan.

So you’ve had a flat in London for a while now?

Well, I didn’t end up buying that particular one because I had just purchased my first place in Vancouver, which is where we were shooting. But it was still a part of the plan. Before “The X-Files” was over, I had a place in the UK, and the first job I did off of “The X-Files” was there.

At this point in our cultural landscape, when you take on a project on the UK, is there an awareness for you that whatever you’re doing will find its way to an international audience?

I think so. The other stuff that I’ve done, like “Great Expectations,” even though they’re BBC… well, certainly with “Bleak House” we knew it would because it was a co-production with PBS Masterpiece, so their idea was that it would at least be seen across the pond. But I am aware of the fact that in the US there is an understanding that there’s this contingent of BBC-type content, or period pieces, etc. There are anglophiles in America.

One of the more striking things about “The Fall,” right from the beginning, is how quiet it can be as a show. I was curious for you as an actor, what goes into playing scenes where there’s so little dialogue to rely upon?

That’s right up my ally. I love that. I’ve always appreciated real time [and] space in films and TV. It’s a particular rhythm. It’s more common to the European market. It’s a rhythm I enjoy watching and a rhythm I enjoy participating in. It’s a space that feels more like life.

When you say that, do you mean it’s more natural?

I think so, yeah. When someone walks through a door in any room, you don’t jump cut to the bathroom. You walk in the door, you go through the living room, you go through the hallway and into the bathroom. Our show takes you through every room, whereas most shows jump cut to wherever the next bit of action is, which is valuable and is its own thing. You can squeeze in a lot more in your hour or 42 minutes if you jump cut, but that’s not what our show is about.

Are you conscious, when you’re inside the scene, of how deliberate that pacing is?

Yeah. You have to be because you fill it. If the camera is steady or on a dolly and you’re going through all those rooms, you’re feeling that time. The shot isn’t just you entering and cut and then the camera resets itself into the bathroom.

The differences between UK and American TV are vast, but I’m wondering if for you, “Hannibal” is similar in tone and pacing.

Yes and no. I would say “Hannibal” has an even more European flavor to it, especially this season as you’ll see. But it’s something else entirely. It’s jam-packed with stuff, but it definitely… I think in some respects it’s more similar than other examples of American TV. 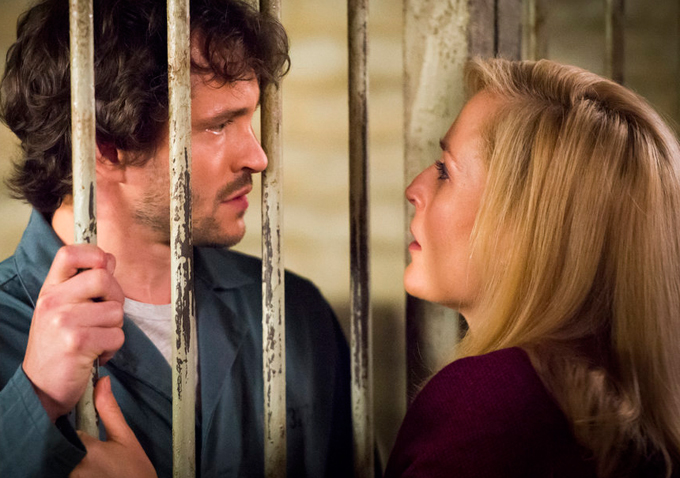 For Stella, the character is such a deliberately sexual being. Was that part of Allan’s original pitch to you or did it evolve out of discussions about the character?

I don’t think that any aspect of that needed to be pitched. There is an essence of Stella, that is a throughline throughout the whole series, and it is self-confidence and a level of femininity and responsibility to herself and her sexuality that is foreign to us somehow for some reason. It’s become fascinating, and yet it’s not for anybody else but herself.

There’s a scene in the new season where Stella is changing in this very stark police bathroom, when she’s been sleeping on the cot in her office — that’s where she changes — and there’s nothing overtly sexual about that. You don’t see anything, but is it more provocative because a woman comes in asking questions while she changes? Or is it that Stella continues to take off her shirt in the process of the conversation? But nothing is exposed, so is it sexual or just her going on through her normal activity while someone asks her a question? I don’t play it sexually. Yet somehow, it’s provocative.

READ MORE: Why Tina Fey and Gillian Anderson Are On Netflix: It’s Not the Future, It’s The Present

This Article is related to: Television and tagged Gillian Anderson, Hannibal, Netflix, The Fall