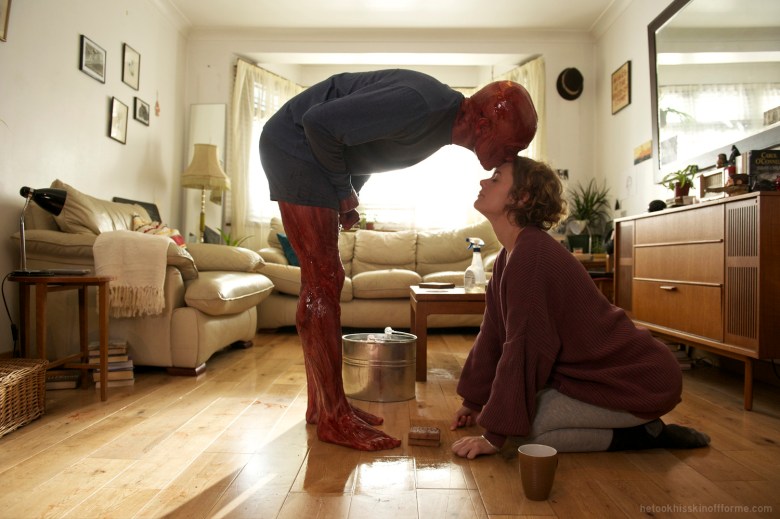 The way I figured it, “He Took His Skin Off For Me” wasn’t going to be all that difficult. “It’s just two people in a house” was how I responded to Maria Hummer’s reasonable incredulity after I insisted that her remarkable short story was going to be our next film together. “All we need to do is figure out this skinless thing and we’re home free.” Two years, 1,152 muscle pieces, 217 Kickstarter backers and whole lot of fake blood later I remain partially right- our two characters definitely are in a house.

READ MORE: Questions to Ask Before Making a Short Film

Maria, myself and producer Fiona Lamptey all knew why we wanted to adapt this incredible short story about a man who takes his skin off for his girlfriend as my graduation film from the London Film School. It’s a fiercely original, darkly funny and hauntingly authentic narrative that grabs you by the back of neck and demands you make sense of it. The question wasn’t whether it would work; the question was how the hell we could possibly achieve it.

In those heady first days we were open to all options. Puppets were on the cards for a moment. CGI was as well, but just like a shiny, skinless Kermit we quickly determined that VFX weren’t the correct tool for this particular story. An image that has been practically photographed has a hard-to-define yet tangible quality that distinguishes it from an image that has been rendered digitally. This is not to say that the latter cannot or has not succeeded the former countless times, rather that the former has a regularly embedded advantage over the latter. Considering that we had next to no money we needed every advantage we could get.

Looking at what we were able to achieve I don’t ever believe actor Sebastian Armesto has no skin, everyone will always see an extremely well made prosthetic. However, the quality of its design and application combined with the tangibility of the practically photographed image is sufficient to allow an audience to suspend disbelief. I don’t believe that they filmed a real “Xenomorph” the same way that I don’t believe they filmed a real “Hulk,” but what I do believe is that what I am seeing in “Alien” is actually there. That is often enough.

Fiona and I started to hit up SFX houses around London. Though they were doing us favors the rates we were quoted were orders of magnitude above what we could have possibly afforded. Turns out its super expensive to make something impossible. Looking back, this is where the story of this film should have ended. It was by chance then that I heard that Colin Arthur, who was SFX supervisor for “The NeverEnding Story” and countless others films, was holding a weekend workshop at Kings College London. I had never even touched a prosthetic before so it felt like the right thing to do before making a film like this.

After a whirlwind two days of silicon and face molds the only way I could think to wind down was to take Colin and his wife Sarah out to the pub. After some pints and a few great war stories from their combined lifetimes in the industry I found myself talking about this story I wanted to tell. Maybe it was the beer, but something magical happened, they nodded and said they were in. Looking back I still can’tt figure this part out. Perhaps it was the capitol of a great story; perhaps it was the cut of my jib. Most likely it was the beer talking though.

“Look around you right now,” he said. “This whole weekend was students who are sick of making zombies and hungry to work on something special. They are your army; they are going to tell this.” I didn’t have to look far. To my left was an amazing young woman called Jen Cardno who had recently dropped out from the Royal College of Art and was taking the course as a birthday present to herself. Right there she became our SFX supervisor and the visionary behind the incredible look of the skinless man. At the time she was a guardian at what used to be an old folks home, which would become our ramshackle studio. By the end we had an FX crew of over 12 talented people constructing hundreds of individual muscle pieces out of that wonderful and incredibly weird abandoned space. It became an anatomical art factory.

“All we have to do now is go find the basic costs of materials and we’re home free,” I insisted to Fiona. Once again, I was partially right, we sure did need to raise the cost of materials. Jen’s design for the suit meant that it was composed of hundreds of smaller pieces, like a jigsaw. Every shooting day meant a new piece so we needed a lot. Magically though we weren’t alone in wanting to see this story come to life. It had hit a nerve online and we were able to successfully raise the necessary £9,000 from hundreds of wonderful people through Kickstarter, picking up an executive producer in Syukri JR and Andrew Morrison on the way.

Were it to have been a single suit it wouldn’t have stood up to what we were asking of it, wrinkling and folding like a t-shirt when he bent over. However the result of that aesthetic decision was an increased application time. At its longest, Seb was in makeup for eight hours. Given that we were working to 12 hour days and that it took an hour to take it off, we had him for only three hours on one day. 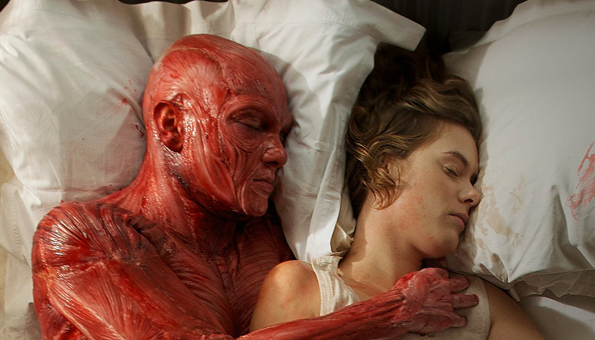 As a result, we brutally storyboarded the film, something that’s rarely best for a performance. However everyone needed to know exactly what had to be applied. If we could save an hour by not applying muscles to the other side of his legs then we had to know. We were careful to imply that you see everything, while never actually filming everything all at once. It simply would have taken too long to do a full body shot.

We had five days in one location (my student house-share), and we ran like a military operation. We had ‘leg’ day where we shot anything that might feature that part of his body. Then there was back day and chest day. Unfortunately for Seb, everyday was face day. The real challenge was making sure that the performances and overall arc of the film remained naturalistic and delicate while slicing up our shotlist over several days to meet the production realities of the SFX. It’s a testament to our incredible actors Anna Maguire and Sebastian Armesto that it feels seamless. What they gave is probably the greatest special effect on show here.

Looking back, I can see how were were somehow able to thread the needle. The money necessary to make this film outside the bubble of a student production doesn’t really exist for a story like this. From what I understand about Maria’s process developing it she found herself writing the first line and was scared, but deciding to dive in anyway. That was pretty much how we treated every aspect of production. I’ve never really done anything that wasn’t a comedy, but just trusted we could do it. Same with the SFX, Fiona and I had never done anything like that before but just dove in. The team had never handled anything on this scale, but just figured they could.

We were never “home-free” at any point, but it always felt like we were. I guess the answer to the question of how we made it was that we simply didn’t know better.

Watch the final results below and check out a Behind the Scenes video here.

Ben Aston’s “He Took His Skin Off For Me” can be found online at Short of the Week. “Russian Roulette” the £50 comedy short he made at the same time, in the same house, will be playing at the Sundance Film Festival later this month.