How I Shot That: DP Jas Shelton on Capturing the Claustrophobia of 'The Stanford Prison Experiment' 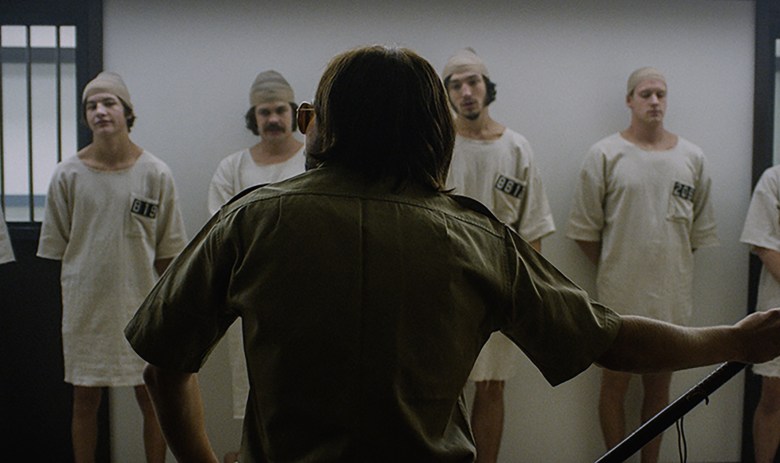 As part of our “How I Shot That” series, Indiewire asked cinematographer Jas Shelton about his work on Kyle Patrick Alvarez’s “The Stanford Prison Experiment,” which recreates Phillip Zimbardo’s infamous 1971 study into the psychology of power. The film, which premiered recently at the 2015 Sundance Film Festival, marks Shelton’s second collaboration with Alvarez after “C.O.G.” He has shot Mark and Jay Duplass’ “Cyrus,” “Jeff Who Lives at Home,” and most recently, their HBO show “Togetherness.”

What camera and lens did you use? RED Dragon, first-generation Leitz lenses (we totally fell in love with the lens and thought it was perfect for the movie).

How did you decide which camera to use? I’m very agnostic when it comes to cameras. I don’t have one particular camera I like. I kind of think of digital cameras as like film stocks, so each project dictates which camera we’ll use. On my previous films with Kyle Alvarez, we shot with a RED and he was really happy with the image quality. Going into this piece we knew we wanted something that was period, but not necessarily overly dramatically so. The footprint of the camera is relatively small and we were shooting in small places, so that was helpful. The resolution was also helpful because we were doing a lot of digital zooms. Also, I just generally feel I can get a grittier look out of the RED than I can with some of the other cameras.

Do you have a preferred approach to lighting or does it depend on the project? It absolutely depends on the project. Some projects are very naturalistic. A lot of my work with the Duplass Brothers is like that, where the intent is to be as naturalistic as possible; a lot of other projects are more stylized. I think “Stanford” hits somewhere in the middle. We were trying to be true to the real-life events of 1971 and present these spaces in the same atmosphere as they were then. We were trying to mimic the lighting sources. But that being said, the majority of the movie takes place in a white room, so we were taking some pretty big liberties in trying to create more contrast. If you look at the first frame of the movie and the last frame of the movie, the images look relatively if not dramatically different and that was quite intentional.

How much did you discuss your color palette before you began shooting? The color palette was extensively discussed primarily because the majority of the film takes place in this one hallway in the basement of Stanford, which was all white walls. That’s where half if not two-thirds of the film takes place. So we intentionally — from a production design standpoint as well as lighting — tried to contrast that with the other spaces, such as the observation rooms and the classrooms. We intentionally tried to infuse those with color, so that you have this world which is visually dynamic contrasting with the monochromatic world that’s happening inside the experiment.

This was the most difficult shot on my movie — and this is how I pulled it off: The overhead tracking shot in a prison corridor… We used a 50-foot Technocrane mounted on 12′ of steel deck, armed over the set.

What’s the best film school for an aspiring cinematographer? Or is it necessary?) Film school is okay. Make movies.

Do you think the shift from film to digital is good? bad? (or just is?) Inevitable… regrettably, all the digital cameras look similar and content is starting to look homogenized.

What advice do you have for cinematographers who want to get to Sundance? Don’t worry about Sundance. Just make movies that interest you.

What’s the best career advice you’ve received? Never light from behind the camera.

What’s the worst advice? Never light from behind the camera.

Editor’s Note: The “How I Shot That” series is part of the Indiewire and Canon U.S.A. partnership at the 2015 Sundance Film Festival in Park City, where we celebrate cinematography at Canon Creative Studio on Main Street. Read the entire series here.

This Article is related to: Toolkit and tagged Cinematographers, Cinematography, How I Shot That, Sundance 2015, Sundance Film Festival, The Stanford Prison Experiment