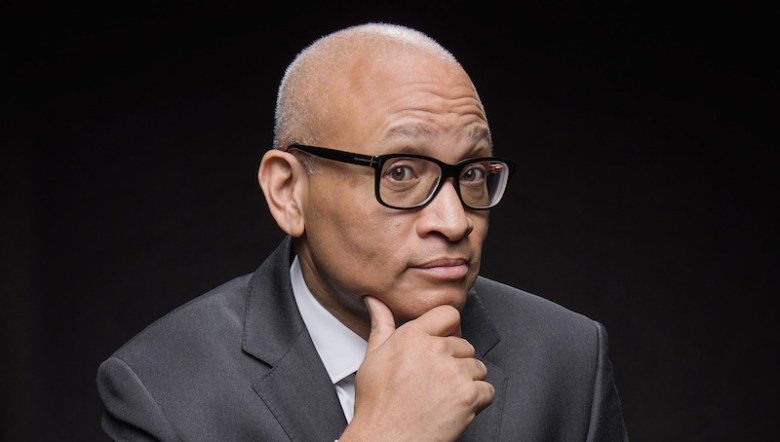 Larry Wilmore hasn’t had much time to prepare.

Sure, the 53-year-old producer, actor and Emmy-winning writer has worked in the world of faux-news before, serving as the “Senior Black Correspondent” on “The Daily Show” for nearly a decade. But now he’s got his own show, “The Nightly Show with Larry Wilmore,” and it’s taking up a timeslot that would have been retired (had that been an option) after “The Colbert Report” ended its incredible late night run at the end of 2014.

Now the very same studio Colbert’s crew used for ten years straight, is now occupied by Wilmore and his writing staff; and before that it belonged to “The Daily Show.”

Wilmore isn’t feeling the pressure, though, saying the building has “some good mojo” — Stephen Colbert left him a “hickory shafted golf club” as a memento, along with an invitation to “go golfing 100 years ago” — despite only having his finished set ready for two weeks. When Indiewire sat down with Wilmore at the Langham Hotel in Pasadena, less than ten days before the show’s premiere, Wilmore had yet to run through an entire practice show.

Like we said — he hasn’t had a lot of time, which is why it was gracious of Mr. Wilmore to spare a few minutes with us to share his plans for “The Nightly Show,” what sets him apart from other ex-“Daily Show” pundits and why he wanted this gig in the first place.

READ MORE: Watch: ‘The Nightly Show With Larry Wilmore’ Teases More About What It Isn’t Than What It Is

You’ve said you’re very focused on being authentic with “The Nightly Show.”

How does that differ from what you did in character as the “senior black correspondent” on “The Daily Show”?

Exactly. The long, long, long, long con. So it means a lot of those things actually, and for me personally, it does mean dropping down that mask and being more of myself. You know, being ready for the unexpected especially because part of our show is a discussion — having a conversation. So you have to be a little more naked in that, and allow yourself to just go with whatever happens. So that’s part of that authenticity conversation. 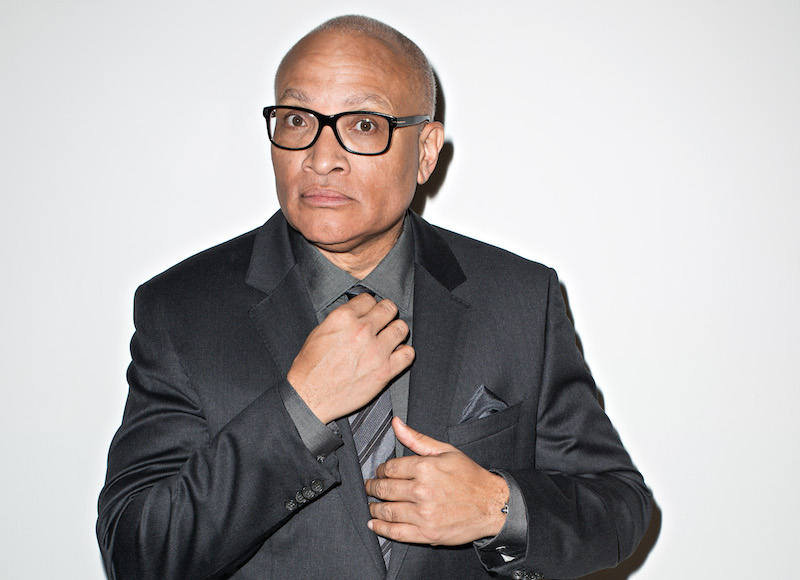 With so many people getting their news from shows like this — “The Daily Show,” “Last Week Tonight with John Oliver,” “The Colbert Report,” before it ended — do you see your show as a comedy show with news or a news show with comedy?

Well, we don’t really look at it as news. For us, it’s more about cultural events, and we’re having a conversation about it, whereas “The Daily Show” is more about news and reporting. Because our show is a discussion and a comic take on things, it’s more about opening up whatever the issues are. So it won’t be as much reporting as it will be deconstructing it, and looking at it from a different point of view. What else is funny about this, or what are we not looking at? So it’s more that than it is giving information and reporting on it. Part of it will certainly be that, but then it goes further.

How do you go about choosing your topics?

It all happens the day before based on what’s going on, based on what strikes us, what feels like we can do a whole show out of it. Because with our show, we’re going to choose something and pretty much you’re going to get a full meal out of it. There’s a comic investigation of it, and then that will lead into our discussion where we’ll look at it from a different way or we’ll open it up a little bit more. Even desk pieces, filmed reports, all that kind of stuff will be centered around whatever it is we’re basically talking about.

For instance, if we were going to cover the Rolling Stone [article] with the rape allegations. I mean, I’m not saying that’s a funny thing, but we’d be looking for the entertaining take on that in the beginning because there would be some absurdity in some of that — absurdity is a better word, probably, than funny. We’d construct bits around that, but then that would also lead to our discussion which we would then deconstruct from another point of view. It may lead to us talking about responsibility in journalism or it may lead us to talk more about campuses and finding out more about that. Our comic piece may be about what’s going on at campuses or what’s going on at Rolling Stone, you know what I mean? There are a lot of different ways you can look at this which gets you to open it up more and have a deeper conversation about it. So that’s going to be the challenge in front of our show, rather than kind of a drive-by joke and then we move on to something else.

Are you coordinating at all with “The Daily Show”?

No, not at all. You do your own thing because every show that night will probably make jokes about similar topics, and there’s nothing you can do about that. Because of the nature of our shows, it’s just going to be different. But even with “Colbert” and “Daily Show” some jokes were similar. There’s just nothing you can really do about that. Of course, I’ll be getting a call from Jon saying, “Hey, man…”

Have you run through any practice shows yet?

You guys are moving quick with this.

Trust me, the producer in me would love to have another week, but there’s nothing you can do.

So how did you go about picking your writing staff?

Oh, that was great. We put out a call to agents and that kind of stuff, and we gave orders for the type of packet that we wanted, that people were going to submit. We got over 400 submissions. It was crazy. For a show like this, if you get 200 that’s a crazy amount. 400 is ridiculous, and we read through them all. We wanted to find interesting voices. That’s what we were looking for. People that were funny, yes, but people who were interesting. Maybe it was their point of view… I wasn’t looking to get a group of people together who had my voice. I wanted to get people together that had an interesting voice, that I wanted on my show.

Well, you’ve got your voice.

I’ve got my voice! I don’t need other people to have that. I already got that. I’m already sick of that. I don’t need more of that. [laughs]

What did you take away from your experience on “The Daily Show” that made you want to do this show in the first place?

That’s a good question. Well, operating in this arena is very exciting. Doing “The Daily Show” taught me how much I really love doing topical humor. I really like doing it a lot. It happens right now. You can synthesize your opinion about it and put it on TV that night. It’s very powerful. When you’re doing a sitcom, you get an idea and it’s on months later. You’re doing a film, and it’s on years later. You’re writing a book, [laughs] …it could be on decades later, you know what I mean? The gratification time ratio is very quick in this arena, so that’s very satisfying. 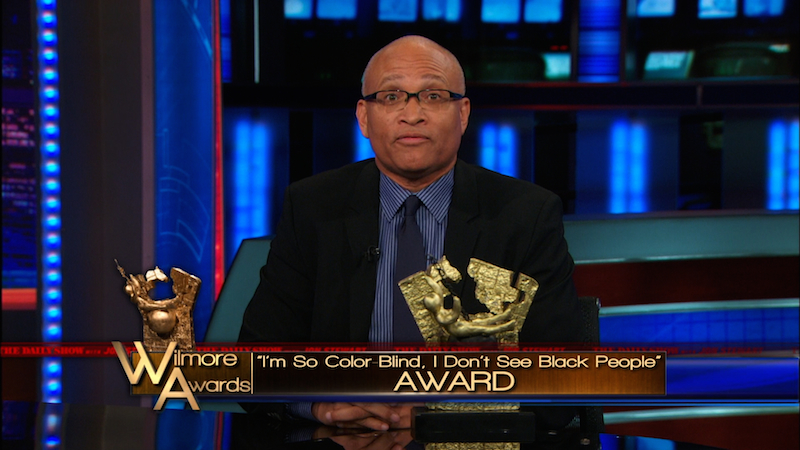 So you see that rapid turnover as more exciting than daunting?

It’s both. It’s both appealing and daunting at the same time. [laughs] As a writer, you’re very familiar with those types of feelings. People say, “Larry, why do you write?” And I say, “Because I have a deadline. Otherwise why would I be doing that?” [laughs]

Do you feel any of the responsibilities as a news anchor, just from sitting behind that desk and choosing what the discussion will be? Did you take any inspiration for that part of it?

Maybe from Jon, I guess. Because that’s how you make your show, deciding what you want to talk about, and part of it is that integrity in the writers’ room that everybody has. You get affected by stories and you realize as things come up why you want to do it. Some things hit you in different ways. Some things are more comic, and some things are more provocative. It’s a day-to-day thing, but I don’t think of it in those terms at all. I’m much more pragmatic. “I have to do a show. It has to be funny. It has to work.” So I never think about it in broad terms like that. And during the day, I don’t think I have to present myself as this and people are getting their news from me — I never think like that.

That’s probably the healthier way to do it.

I would be sunk if I was thinking like that.

Social media has become a huge part in who dominates the conversation with late night shows. How are you planning to handle it?

We look at it as “extra ‘Nightly’-ness.” So people can kind of experience the show not only on our site, but in social media, on platforms and that kind of stuff. And the show itself — the way you look at what you’re doing now, you look at it as content more than a show. So you accept the fact that a minute-and-a-half clip is what you want to put on Facebook that morning or whatever. People don’t have to see the whole show to get an experience of it. They can experience it in pieces. So we’ve had those conversations from the beginning and have been building the show with that in mind. 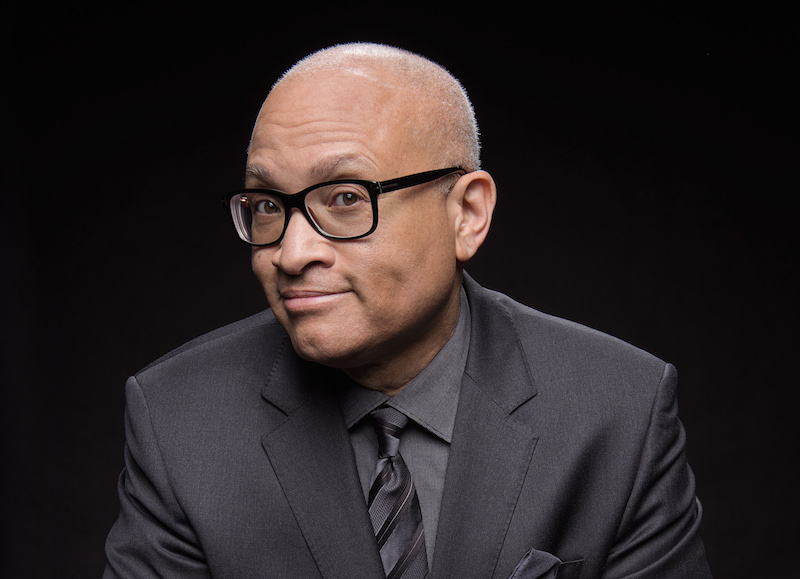 Are you going to focus on putting out shorter clips?

I think it will be a combination of all those things. Certainly there will be a lot of [short clips] because that’s a great way for people to experience your show who haven’t had a chance to see it. They’ll have their phone and watch a clip from it and go, “Oh, wow. That looks cool.” Maybe it will drive them to watch more of it, or maybe that’s all they need. Maybe that’s how they like to experience it, just by watching small clips.

Has there been anything you really wish you could have dug into while it was still topical, something you missed out on by starting now rather than a year ago?

I don’t think there’s been anything interesting happening…

No, it’s been pretty dull lately.

[laughs] We could have easily been on a year ago and had an amazing year.

But was there any discussion, while it was happening, you really wish you could’ve helped steer?

I’ll be honest with you. I think you can look at almost anything that happened this past year, and I don’t think there’s anything where I haven’t felt that.

“The Nightly Show with Larry Wilmore” premieres January 19 at 10:30pm and will air Monday through Thursday at that time on Comedy Central.

READ MORE: Why ‘Last Week Tonight With John Oliver’ is The Next Generation of Late Night