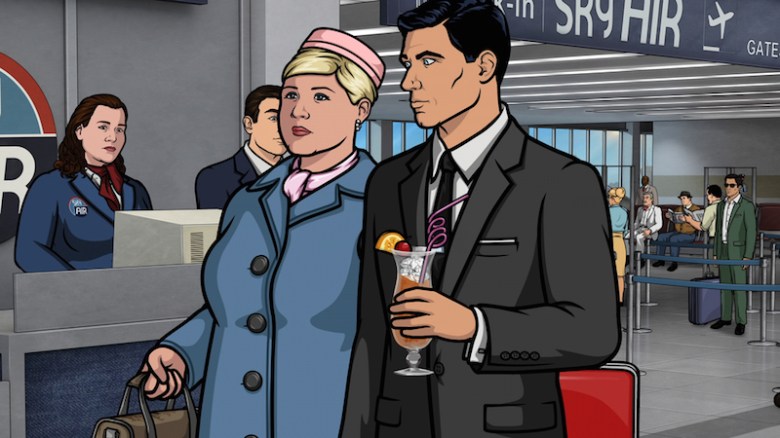 “I swear to God I had something for this.” (Summary)

After an office interaction that should have been awkward but was hilarious instead — seriously, making Pam hold the coffee mug while Archer filled it with whipped cream and whiskey was the extra stroke that made the whole bit work — the former lovebirds/sex experts headed to Green Bay, Wisconsin for Pam’s sister’s wedding. One hitch: the cyborg using the remains of Barry’s brain overheard their plans while heading to New York, presumably to kill Archer, and followed them to the northern hellhole that houses the worst team in the NFL. [Editor’s note: As will become clear, the writer of this piece is a Chicago Bears fan.]

Between an angry Barry and a somehow angrier Edie (Pam’s sister), “Edie’s Wedding” became a battle of epic proportions, culminating in the near-death of almost every character involved. Meanwhile, back in New York, Lana desperately seeks a babysitter after Archer bailed on his fatherly duties. First, she checks with Mallory, but Grandma Archer — as she absolutely doesn’t want to be called by anyone other than AJ and Lana — is heading on a getaway with Ron, who’s back in her life. After a failed attempt at snagging Krieger, Lana turns to Cyril, who proves to be the kind and willing participant needed. Here’s hoping this isn’t the start of their second romance (third if you count the times they’ve regularly consummated the thing). 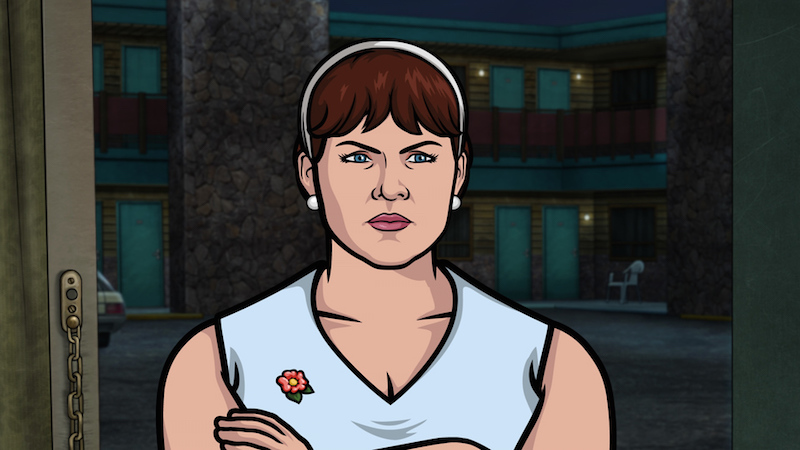 Honestly, it’s the simple silence of the aforementioned intro, but since we don’t have a video link of the proceedings to put in place of this paragraph, we’ll briefly discuss Pam’s insanely excellent drinking plan for her sister’s wedding. “You gotta pace me,” she said as Archer poured her another delicious handmade cocktail. “I’m sewn into this sum’ bitch, so for every ounce that goes in an ounce gotta go out.” Her solution? Diuretics and laxatives (for the sundae bar). Pam has never been one to go easy on any vice.

Obviously, this has to be the “Silence of the Lambs”-inspired rescuing of Pam from Barry’s elaborately-lit but simply booby-trapped barn-set hostage situation. He might have gotten away with the arrogantly-designed death trap had it not been for the Poovey sister’s freakish strength, but it was Edie who saved Archer from having his head crushed, and then Pam who saved her sister from a throat-crushing choking. Archer’s explosive ammo was pretty sweet-lookin’, as was the burning barn. Plus, the dying Barry’s “Terminator” reference, though obvious, was still as fun as it was sharply-designed.

“This is weird. Why is this weird?” – Lana about Cyril’s suspiciously kind offer to help with baby AJ.
*CUT*
“Because what kind of sick bastard travels with duct tape and rope?” – Edie, after being forced into helping save Pam. 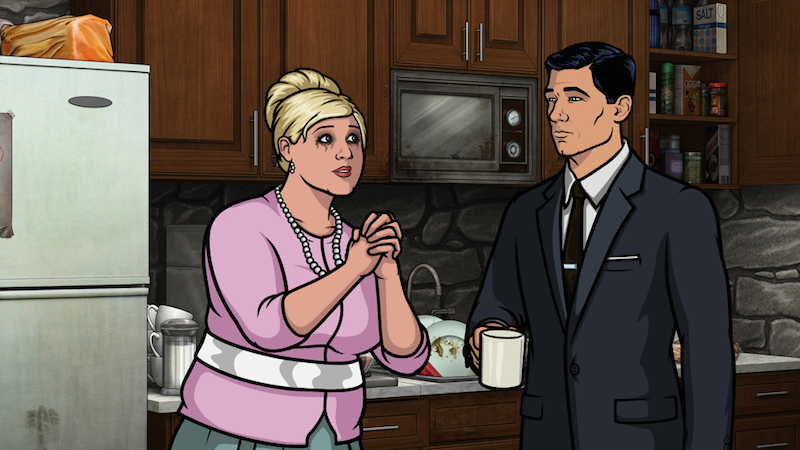 Though not invented by our titular hero, Krieger’s design work needs to be addressed. His creepy robotic teddy bear — Cyber Neddly Teddy — was a memorably terrifying part of Episode 2, and now we learn he’s been working on devices to make you ejaculate on the spot (as alluded to by Cyril in his conversation with Lana) and poop your pants. The K-9000 Infrasonic Pulse Rifle either works and made baby AJ shit herself, or baby AJ is just a normal baby unaffected by a crazy Nazi doctor’s odd gizmo. Either way, Krieger’s experiments seem to be entering a new phase of crazy.

“If you wake this child I will climb inside you with my shoes on.” – Lana

Though i could spend this section discussing how Allison Tolman’s solid voice work still couldn’t save a character too abrasive for the story’s humor to overshadow its violence, instead I’m going to address the most important — and subtle — element of this so-so episode (by the very high “Archer” standards): i.e., the underlying battle of good vs. evil as represented by Archer fighting Barry, and tweaked in this episode to include the nearly century-old NFL rivalry between the Green Bay Packers and Chicago Bears. [Editor’s note: Please remember that the writer of this article is a Chicago Bears fan.] 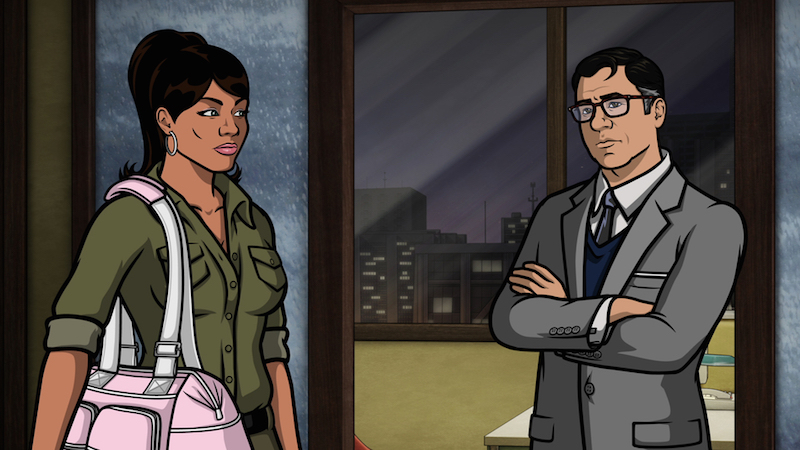 We’re all very familiar with the ongoing scrum between arch-rivals Archer and Barry. The two have been going at it since Barry was working with ODIN and still had his body and heart and stuff. What many may not be thoroughly educated on — including, so it seems, Adam Reed and the “Archer” writing staff — is the hatred shared between the Bears and Packers, two of the NFL’s oldest teams, division rivals and eternal representation of good and evil. You see, the Chicago team has, is and forever will be the side representing “good,” and their evil, ugly and preposterously lucky (that is, until two weeks ago) northern nemesis the illustration of “evil.” Yet for some reason in this episode, Barry is seen wearing Chicago gear, with a hat, scarf, coat and earmuffs all decked out in Bears’ colors while Archer remains somewhat neutral in white. Neutral, that is, until he starts protecting the Green Bay natives Pam and Edie while making a drink that’s the color of the Packers’ uniforms. Say it ain’t so Adam! Archer can’t represent…evil, can he?

Now, it shouldn’t be expected that a North Carolina native like Adam Reed fully comprehend the importance of these choices. After all, the Packers have been besting the Bears of late, coming within two games of evening up their historic record at 93 wins apiece. Their current QB is also quite the likable fellow, seeing as he’s never showy (other than that crass endzone celebration) and does what he must to win games. So it’s understandable why an East Coaster might think they’re the good guys. That being said, the Packers are a disgusting organization, from their nauseating color scheme to their upsetting history of worshipping ass holes. Let’s not forget the QB before Rodgers was none other than the dick-pic sending, interception-chucking, poor-form coaching idiot Brett Favre, a man so low he went to play for his team’s second biggest rival after he faux-retired. They still worship him in Green Bay, which should be no surprise considering, a) it’s so cold and miserable up there, they must lose brain function for half the year; b) which is why they think wearing cheese on their head is something to be proud of; c) and also why they still live in Wisconsin, the worst state in our great nation this side of Florida; d) and finally, they now worship this guy. I mean, come on. That’s just gross.

So please, “Archer” fans. Don’t be confused by Barry’s need for warm clothes. It’s either a simple nod to the rivalry from the writers, once they knew the episode would be set in Wisconsin, or it’s a strange way of illustrating which organization is more powerful (cyborg trumps man every time). In the end, I firmly believe Archer would have worn the beautiful orange and blue colors of Chicago had he been given the choice. At the very least, it’s far more likely than him ever putting a block of cheese on his dome.