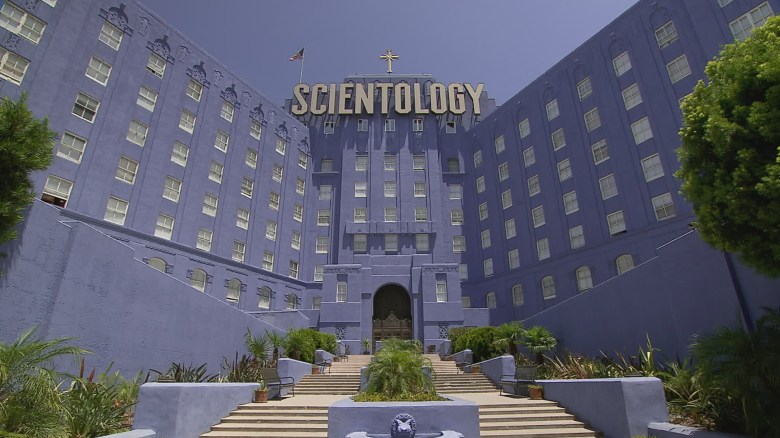 From “Enron: The Smartest Guys in the Room” to the Catholic church exposé “Mea Maxima Culpa,” Alex Gibney’s documentaries often adopt a straightforward approach to exposing institutional dysfunction. “Going Clear: Scientology and the Prison of Belief” falls into that tradition. The director’s bracing adaptation of Lawrence Wright’s 2013 book on the religion’s bizarre history is fairly routine in terms of its allegations. But with such outlandish material, that’s more than enough.

READ MORE: Alex Gibney Premieres His Scathing Exposé on the Church of Scientology

By now, there’s nothing entirely fresh about the story of L. Ron Hubbard’s construction of a cult based around far-fetched science fiction conceits and the devious antics that ensued from it — many of which were perpetrated by Hubbard’s tyrannical successor, the elusive David Miscavige. Nevertheless, taking cues from gripping testimonies provided by several high profile former members of the group — including top-level executives and an eloquent Paul Haggis — “Going Clear” delivers an efficient overview of Scientology’s dark history with a cohesive focus on the precision of its corrupt motives.

The first half of “Going Clear” plays as a kind of non-fiction alternative to “The Master,” sketching out the history of Hubbard’s interest in crafting a religion based around his influential book “Dianetics.” Hubbard himself appears in revealing archival footage at the height of his influence, discussing his murky philosophies associated with obtaining harmony through personal recollection.

Gibney contrasts his strange assertions with backstory from Wright as well as former Scientologists who witnessed Hubbard’s nonsensical lectures years ago. As usual, the filmmaker also peppers his narrative with a healthy amount of archival material, including diary entries by Hubbard ex-wife Sarah Northup as she asserts her husband’s desire to “create a religion for success.”

Moving through the decades, “Going Clear” shows the precision of Hubbard’s brainwashing abilities even as he faces scrutiny from the media. Gibney’s subjects explain the dubious E-meter process (“two-thirds of a lie detector test”), the device that leads Scientologists to believe they can expunge their internal conflicts through a meticulous form of verbal repetition.

Though the movie eventually comes around to explaining the ludicrous conceit behind this practice — Hubbard’s assertion that human beings are infected by alien souls — the movie’s meticulous explanation for the test’s seeming effectiveness ensures that “Going Clear” sticks to an empirical approach. With a measured journalistic prowess on par with his source material, Gibney takes nothing for granted.

Even so, there are plenty of gasp-worthy moments, including footage of Scientology gatherings that illustrate the sheer oddities of its operations. These include Miscavige at the Scientology’s lavish gala delivering the eerie pronouncement of Hubbard’s death, and more recent footage that includes a birthday party for Tom Cruise and Scientologists talking former members. One crucial account, from Spanky Taylor, focuses on her efforts to lure John Travolta into the church and essentially trapping him there by providing him with resources to protect his private life. Taylor herself became a victim of the church when she voiced some complaints, lost contact with Travolta and wound up being confined to a home with her infant. Her recollection of escaping the home with her child is the thrilling high point of the movie.

Gibney carefully draws a contrast between the deranged Miscavige and his predecessor, who may very well have felt passionately about the potential for his religion to cure his own psychological ailments. Miscavige’s crazed managerial style is a different story. His obsession with manipulating Cruise’s image for the sake of the church’s massive profile finds its match in the recollections of his ex-adherents, who were subjected to physical abuse from him on a regular basis.

His machinations are particularly evident in one sequence recounts Miscavige’s ability to circumvent tax audits from the IRS with a series of meticulously designed lawsuits. His celebratory announcement at the annual Scientology gala provides one of many occasions in which the shadowy figure addresses his followers with the confidence of a dictator. Crucial to Miscavige’s schemes is Cruise, who’s seen at one point receiving a luxurious Scientology birthday party — essentially held hostage by the church’s ability to coddle him.

Set to clear-eyed analysis that puts them in context, these clips effectively illustrate the scope of Scientology’s brainwashed masses. But it’s the tales of former members waking up from the madness that give the movie its vibrancy. Unsurprisingly, Haggis emerges as the best storyteller of the bunch, particularly in his recollection of learning the church line about a galactic warlord named Xenu whose evil rulings provide the religion with its inane origin story. His reaction: “The fuck is this?”

Deeply involving in its swirling overview of Scientology’s troubling history, “Going Clear” offers a polished approach to its topic throughout. Gibney uses charts and numerical data to illustrate the church’s expanding influence as it has amassed billions in worth. The movie successfully brings its drama into the present day, though its focus suffers somewhat from a narrow scope. By limiting the talking heads to a handful of well-known defectors and a few prominent journalists, “Going Clear” lacks the immediacy that testimonials from younger defectors could have brought.

But it compensates for that shortcoming with the inspiring commitment of the former Scientologists willing to speak up.  As a result, it’s ultimately less about the evils of the church than the motives of the people intent on stopping its oppressive ways. The story closes with the efforts of Scientology critic Jason Beghe to gather many of the film’s subjects in a galvanizing attempt to effect change.

As the heroes of “Going Clear,” they give the movie its underlying value as a form of advocacy. To that end, their reflections unquestionably offer a path for current Scientologists questioning their commitment. The title technically refers to the Scientology concept of cleansing invasive alien “Thetans” from one’s body, but by the end, it has a new context: The defectors have gone clear of the forces that brainwashed them for years, and “Going Clear” is an apt tribute to their defiance.

“Going Clear” premiered this weekend at the Sundance Film Festival. HBO will release it later this year.

READ MORE: Alex Gibney Premieres His Scathing Exposé on the Church of Scientology