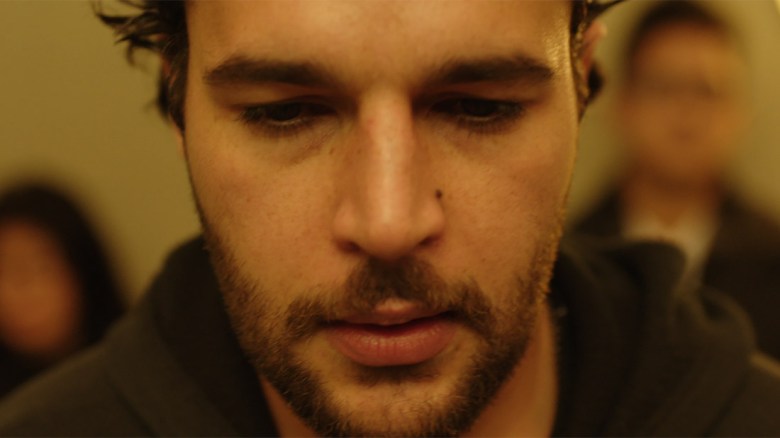 Mond’s feature-length debut as writer-director bears many of hallmarks found in previous Borderline efforts: It focuses on a troubled young adult battling his internal demons and explores his conundrum through a series of precise cinematic devices. But unlike other Borderline efforts, “James White”—essentially a movie in which a character loosely based on Mond watches his mother slowly die of cancer—offers a universal accessibility. Despite the cerebral formalism that pushes it forward, Mond has made a genuine tearjerker.

The name “James White” has the same syllables as “Josh Mond” for a reason: Mond’s story draws from his own recent experiences with his mother’s passing. Alternately in denial and infuriated, Mond’s thinly veiled character maintains a remarkably complex screen presence thanks to a fierce delivery by Christopher Abbott in his first major role. Notably, the specifics of the plot offer nothing especially groundbreaking: Already exasperated from his father’s death, interminably unemployed James attempts to resist his responsibilities by launching on a soul-searching mission to Mexico. But just as he finds his equilibrium there with a supportive female companion (Makenzie Leigh), his mother (Cynthia Nixon) calls: Her cancer’s back and she’s starting treatment; she needs his support. So begins a steadily grueling experience as James returns to New York City and watches his mother gradually slip away from the world while he questions his own place in it.

Needless to say, while Mond hits the story’s emotional beats on cue, this is not your average cancer drama. Using a restless style that energizes each scene, Mond makes it impossible not to get swept up in the increasingly devastating story. His tale unfolds with the momentum of a real-time thriller as Abbott’s character darts around his mother’s apartment, cramped hospital rooms and crowded nightclubs in search of an ever-elusive catharsis for his situation. While his mother’s health is a ticking time bomb, James’ own mental stability doesn’t fare much better.

Mond’s camera rarely strays from Abbott’s troubled face, with its furtive glances and untamed facial hair, as “James White” exclusively hovers in its protagonist’s uneasy subjectivity. In true Borderline fashion, the movie’s visual approach to storytelling feels more akin to European traditions than anything else being done on the American scene: The fluid camerawork, which often floats so close to Abbott’s head it threatens to mow him down, suggests the Dardenne brothers on speed, but the cryptic aspect of his struggle feels closer to Michael Haneke.

Even so, “James White” doesn’t only linger in bad vibes. Taking cues from James’ fluctuating mindset, Mond observes James’ charismatic ability to woo his girlfriend in Mexico and gleefully engage in a bar fight with his longtime friend (Scott Mescudi). The movie’s tonal shifts create a visceral template for James’ experiences — whether furious or amused, he’s always rich with attitude, and his cocky demeanor provides a foundation for Mond’s eloquent look at various stages of grief.

Since “James White” stays by James’ side, we experience the turmoil of his mother’s state alongside him. One extraordinary sequence finds him desperately battling for her medical care only to discover that her health has deteriorated far more than she initially made to clear to him. Elsewhere, denial gets the best of him; when he shows up drunk and unkempt for a job interview at New York magazine, he receives frank advice from a friend of the family (Ron Livingston). It’s the only time that someone manages to break through to him; for the most part, James is alone with his sadness.

Though she appears in fewer scenes, Nixon delivers a credible embodiment of debilitating illness with all the ups and downs one might expect. Warm and lucid in one scene, frantic and weakened in the next, her physical state becomes an evolving metaphor for James’ shifting emotions — and, by extension, our own. Because we witness her smiling, lively personality in his company, its sudden absence when she takes a turn for the worst cuts deep. It constantly threatens to devolve into a showy performance; fortunately, Nixon keeps it from going there.

Yet it’s Abbott who truly comes into his own. In contrast to his role as the genial Charlie on “Girls,” Abbott has recently shown a penchant for tough, individualistic characters with supporting roles in last year’s eerie relationship drama “The Sleepwalker” and a memorable bit part as an auto thief in “A Most Violent Year.” In “James White,” he singlehandedly carries the movie’s weighty events with subtle expressions and a liveliness that never lets up.

Despite the grim inevitability of the events at end, “James White” finds its way to an uplifting conclusion. Mond’s script doesn’t supply the character with a sweeping tell-all monologue or some mawkish finale. Everything about James’ situation is internalized, right down to a climactic shot, which suggests that the only solution to coping with a loved one’s death is to confront the life surrounding it.

“James White” premiered this week at the Sundance Film Festival. It is currently seeking U.S. distribution.

This Article is related to: Reviews and tagged Reviews, Sundance 2015, Sundance Film Festival, Take Me to the River (2015)