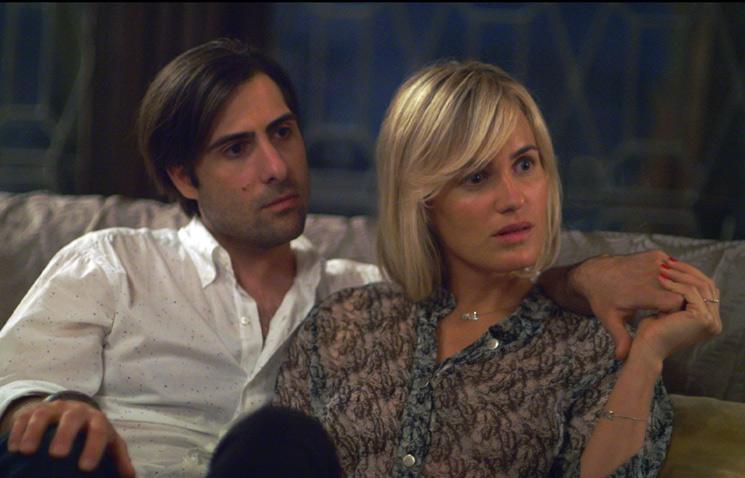 While male genitalia started to become a punchline in American comedies at least as far back as “Forgetting Sarah Marshall,” there’s a case to be made for the gag reaching its full potential in writer-director Patrick Brice’s “The Overnight.” A scene in which Jason Schwartzman and Adam Scott show off their (allegedly prosthetic) junk in an awkward display of male bravado maintains a terrific slapstick kick — puerile humor at its finest.

The moment also illustrates the limited comedic inspiration of Brice’s loose, uneven romp, which goes down easy and never digs too deep. But in the pantheon of lighthearted sex comedies, it’s basically a paragon of the genre.

The oddball nature of “The Overnight” takes some time to settle in. At first, Brice focuses on a fairly routine, sitcom-ready premise: Thirtysomething couple Alex (Adam Scott) and Emily (Taylor Schilling) movie from Seattle to to the Eastside of Los Angeles with their young son; at the playground, they encounter the mysteriously wealthy eccentric Kurt (Jason Schwartzman), who invites them over for dinner at his mansion with his European wife Charlotte (Judith Godreche). After a pleasant evening of pizza and wine, Kurt and Charlotte convince the other couple to put their child to bed upstairs and hang out late into the night. Over the course of an increasingly awkward hangout session, the duo smoke pot, guzzle champaign and dive into the pool as Kurt and Charlotte make cryptic advances on their houseguests, leading the befuddled Alex and Emily to wonder if they’ve inadvertently signed up for a swinger’s party. 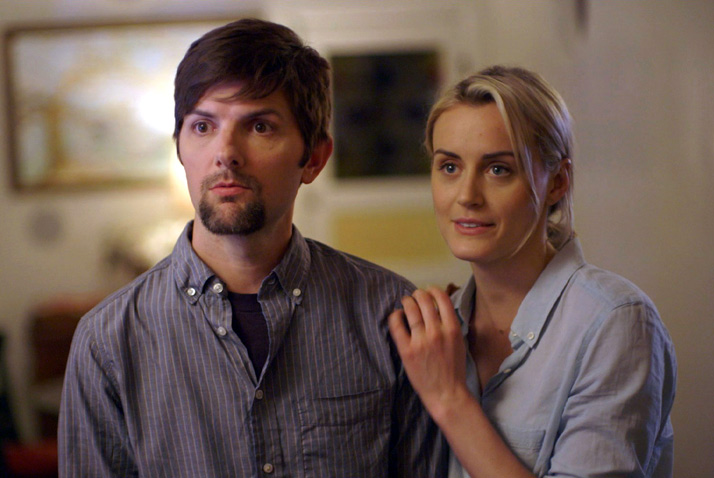 After it opens with a sad depiction of Alex and Emily’s creaky bedroom life, marked by their rushed to get off before their kid wakes up, “The Overnight” shifts into a more peculiar depiction of troubled domesticity. With Kurt’s source of affluence left in question for most of the running time, much of the movie involves Alex and Emily appearing startled as the other couple increasingly urge them to let their guard down and throw themselves into the hedonistic rush of the evening antics.

Even though the story involves legitimate issues surrounding sexual identity and the boundaries of monogamy, its humor only goes surface deep. For the most part, the endearingly silly plot amounts to little more than sight gags and off-the-wall asides.

Fortunately, Brice’s actors hold the material together. Scott is entirely credible as the straight man constantly afraid to let his guard down and enjoy the evening — though he’s matched by Schilling, whose wide-eyed reactions to the night’s bizarre developments recall her finest moments on “Orange is the New Black.” Godreche is reasonably effective as a would-be seductress with dubious motives, but it’s Schwartzman who truly excels as the  kooky Alex. Yet another fresh turn from the actor following last year’s against-the-grain act in “Listen Up Philip,” the role finds Schwartzman delivering an amusing form of confident bravado, the full nature of which only comes together in the memorably cringe-worthy third act.

“The Overnight” is produced by Mark and Jay Duplass’ Duplass Brothers Productions (which has three films at Sundance this year) and it shares the loose, genial quality of the sibling directors’ goofy male-centric comedies. But with the vignette-like structure of the evening proceedings, it lacks the same depth. Despite weird vibes that Alex and his wife introduce to the other couple’s lives, the story’s underlying conundrum — in which the prospects of a settled married life collide with unadventurous bedroom chemistry — rings fairly hollow.

After a phenomenal penultimate scene that brings the tension to a head, “The Overnight” ends with a shrug. Brice takes the narrative to a certain enjoyable extreme before backing down from its edginess at the last minute. Still, the limitations of “The Overnight” don’t come anywhere near the restrictions of most mainstream relationship comedies. To that end, Kurt’s joyful desire to experiment and invite others along with him provides a welcome antidote.

“The Overnight” opens in limited release this Friday.