Here Are All the Movies Opening Today, February 27; What Will You See? 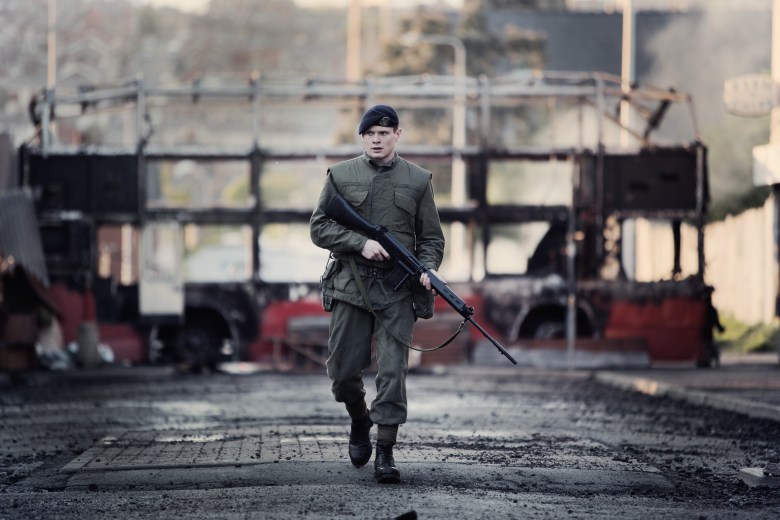 Here are the films opening theatrically in the U.S. the week of Friday, February 27th. (Synopses provided by distributor unless listed otherwise.)

Focus
Director: Glenn Ficarra & John Requa
Cast: Will Smith, Margot Robbie, Rodrigo Santoro, Robert Taylor, Gerald McRaney
Synopsis: “Nicky is a seasoned master of misdirection who becomes romantically involved with novice con artist Jess. As he’s teaching her the tricks of the trade, she gets too close for comfort and he abruptly breaks it off. Three years later, the former flame—now an accomplished femme fatale—shows up in Buenos Aires in the middle of the high stakes racecar circuit. In the midst of Nicky’s latest, very dangerous scheme, she throws his plans for a loop…and the consummate con man off his game.”
Criticwire Grade Average: C+ (6 reviews)

A La Mala
Director: Pedro Pablo Ibarra
Cast: Aislinn Derbez, Mauricio Ochmann, Luis Arrieta, Aurora Papile, Daniela Schmidt
Synopsis: “Maria Laura ‘Mala’ is an actress with little luck, but she is successful working for other women, seducing their boyfriends to know if they are faithful or not. But everything changes when her dream to perform in her acting career depends on a job to be performed with Santiago who breaks the pattern and shakes her professional convictions.”
Theatrical Release: Limited

Almost There
Director: Dan Rybicky & Aaron Wickenden
Synopsis: “A coming-of-(old)-age story about Peter Anton, an elderly ‘outsider’ artist living in isolated and crippling conditions whose world changes when two filmmakers discover his work and storied past. Shot over eight years, ‘Almost There’ documents Anton’s first major exhibition and how the controversy it generates forces him to leave his childhood home. Each layer revealed reflects on the intersections of social norms, elder care, and artistic expression.”
Theatrical Release: Carbondale, IL (opens in Columbia, MO on March 6th and Columbus, OH on April 3rd)

Ana Maria in Novela Land
Director: Georgina Riedel
Cast: Edy Ganem, Michael Steger, Luis Guzmán, Elizabeth Peña
Synopsis: “Ana Maria is a typical 20-something living life on her own terms but frustrating her family and friends all the while doing so. As she journeys inside a world of seemingly limitless opportunities in “Novela Land,” things get heated during a love affair with a wealthy businessman and his younger, sexy son. Meanwhile, Ariana is forced to deal with the harsh realities of living in Los Angeles with an over-protective but loving family. As each of these women navigate their new lives, they come to the realization that love and true faith in themselves is all they really needed to have the life they dreamed of.”
Theatrical Release: Los Angeles, Houston and Miami

Anita Ho
Director: Steve Myung
Cast: George Cheung, Elizabeth Sung, Lina So, Steve Myung, Albert Wong, Raymond Ma, Brian Yang
Synopsis: “Harry Ho, a down on his luck 30-something finally decides to propose to his girlfriend, Anita on her 30th birthday. But when Anita decides to spend her birthday in Las Vegas with her entire family – the fireworks begin! See, Anita is a traditional Chinese-American girl and Harry is not Chinese and her parents have never even met him! To make matters worse, unbeknownst to both of them – Anita’s Mom has a nice doctor in mind for Anita, not a broke Harry Ho!”
Theatrical Release: Los Angeles

Deli Man
Director: Erik Greenberg Anjou
Synopsis: “Every story needs a brave and trustworthy guide, and Deli Man’s is the effusive and charming Ziggy Gruber, a third-generation delicatessen man – his uncle and great-uncle owned Berger’s in the diamond district, and the Woodrow Deli on Long Island. His grandfather owned the famous Rialto Delicatessen on Broadway, and Ziggy was stuffing cabbages atop of a crate when he was eight. Now he is owner and maven (as well as a Yiddish-speaking French trained chef) of one of the country’s top delis, Kenny and Ziggy’s in Houston – yes, Texas…Shalom y’all.”
Theatrical Release: Various (including Houston, Miami, Orlando and Phoenix)

Eastern Boys
Director: Robin Campillo
Cast: Olivier Rabourdin, Kirill Emelyanov, Daniil Vorobyov, Edéa Darcque, Camila Chanirova
Synopsis: “They come from all over Eastern Europe: Russia, Romania, Chechnya. They are Eastern boys. The oldest appear no more than 25; as for the youngest, there is no way of telling their age. They hang around the Gare du Nord train station in Paris. They might be prostitutes, but there is no way of knowing for certain. Muller, a discreet man in his late fifties has his eye on one of them – Marek. One afternoon, Muller gathers his courage and speaks to him. The young man agrees to come visit Muller the following day, at his place. However the next day, when the doorbell rings, Muller doesn’t have the faintest idea that he has fallen into a trap.”
Theatrical Release: New York

Everly
Director: Joe Lynch
Cast: Salma Hayek, Hiroyuki Watanabe, Jennifer Blanc, Caroline Chikezie, Gabriella Wright
Synopsis: “It’s Christmas time, but all is not well in the world of Everly. A call girl by trade, Everly has turned against her gangster boss Taiko and become a police informant. In response, Taiko has put out a hit on Everly and her family. Soon, every criminal in town wants to cash in. Everly’s survival instincts quickly kick in as she matches wits and firepower with Taiko and a seemingly endless stream of killers.” [Fantastic Fest]
Criticwire Grade Average: B- (5 reviews)
Theatrical Release: New York

Farewell to Hollywood
Director: Henry Corra & Regina Nicholson
Synopsis: “In a recurring poetic image, 17-year-old Regina Diane Nicholson swings between heaven and earth on a breathtakingly high cliff by the sea. Reggie is a tomboy struggling with terminal illness, her parents and her dream of making a film. She impresses us with her loving, strong personality and wisdom beyond her years, as well as her morbid sense of humor. When director Henry Corra met 17-year-old filmmaker Regina Nicholson at a film festival, he agreed to help her make a feature film. What developed over nearly two years is a powerful friendship and poignant relationship between Reggie and Henry. He became her collaborator, friend and defender in her fight to find artistic and personal freedom. When Reggie turns 18 and can make decisions on her own, things become even more intense.”
Theatrical Release: New York and Los Angeles (opens in Santa Fe on March 20th and Columbus, OH on April 3rd)

Futuro Beach
Director: Karim Aïnouz
Cast: Wagner Moura, Clemens Schick, Jesuita Barbosa, Sabine Timoteo, Sophie Charlotte Conrad, Demick Lopes
Synopsis: “Moura is the lifeguard Donato, who works at the Praia do Futuro. He starts to escape from his life after losing a German tourist during a rescue. When Donato begins to drift away, his younger brother, Ayrton, starts trying to help him up.”
Theatrical Release: New York (opens in San Francisco on March 13th, Denver on March 27th and Miami on April 10th)

The Hunting Ground
Director: Kirby Dick
Synopsis: “The statistics are staggering. One in five women in college are sexually assaulted, yet only a fraction of these crimes are reported, and even fewer result in punishment for the perpetrators. From the intrepid team behind The Invisible War, comes The Hunting Ground, a piercing, monumental exposé of rape culture on campuses, poised to light a fire under a national debate.” [Sundance Film Festival]
Criticwire Grade Average: B+ (9 reviews)
Theatrical Release: New York and Los Angeles (expands to various cities nationwide through the end of April)

Maps to the Stars
Director: David Cronenberg
Cast: John Cusack, Robert Pattinson, Julianne Moore, Mia Wasikowska, Olivia Williams, Sarah Gadon, Evan Bird
Synopsis: “Maps to the Stars connects the savage beauty of writer Bruce Wagner’s Los Angeles with the riveting filmmaking of director David Cronenberg and a stellar ensemble cast to take a tour into the darkly comic heart of a Hollywood family chasing celebrity, one another and the relentless ghosts of their pasts. The result is a modern Hollywood Gothic at once about the ravenous 21st Century need for fame and validation — and the yearning, loss and fragility that lurk in the shadows underneath.” [Cannes Film Festival]
Criticwire Grade Average: B (45 reviews)
Theatrical Release: Various (including New York and Los Angeles, Atlanta, Austin, Boston, Dallas, Denver, Detroit, Memphis, San Diego, San Francisco, Seattle and Washington, DC)

Snow Girl and the Dark Crystal
Director: Zhao Tianyu & Peter Pau
Cast: Chen Kun, Li Bingbing, Winston Chao, Zishan Yang, Bao Bei-Er, Summer Jike
Synopsis: “The story of Chinese legendary anti-hero Zhong Kui, a young man endowed with mysterious powers who is forced into a battle among the realms of Heaven, Earth and Hell in the course of his attempt to save his countrymen and the woman he loves.”
Theatrical Release: Various (including New York and Los Angeles, Boston, Chicago, Dallas, Houston, San Diego, San Francisco, Seattle and Washington, DC)

The Widowmaker
Director: Patrick Forbes
Cast: Gillian Anderson
Synopsis: “Every minute of every year an American drops dead of a heart attack, hundreds of thousands without any warning or prior symptom. But these people could have been saved. The Widowmaker uncovers a chilling tale of greed, ego, and a conspiracy of silence around that most vulnerable of human organs – the heart.”
Theatrical Release: Limited

Missed last week? Here are all the releases from the weekend of February 20th.