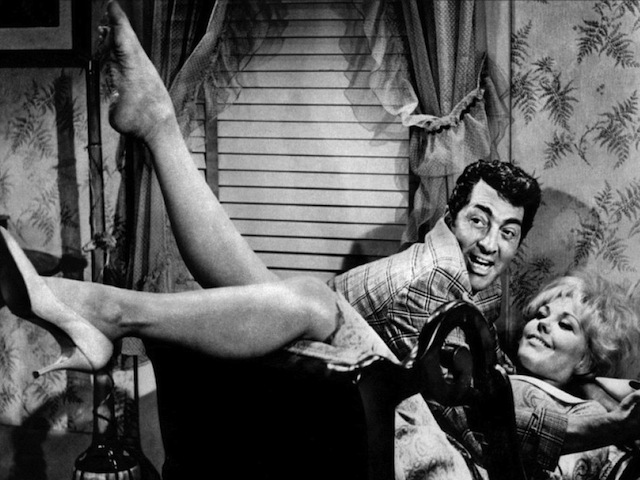 “Kiss Me, Stupid” isn’t often thought of
as one of Billy Wilder’s essential comedies, but it’s one of his funniest and
most biting. Olive Films is releasing a bare-bones but beautiful-looking Blu-Ray of the film today, and it’s a great opportunity to catch up with one of Wilder’s most underrated works. The film is a jaundiced look at both the ring-a-ding-ding early 60s
and the more “wholesome” small town people of the era, all in the form of a
sexual farce. On paper, sounds like a follow-up to Wilder’s crowd-pleasing “Irma la Douce” or “Some Like It Hot.” In practice, its causticity nearly
matches that of his black-hearted “Ace in the Hole.”

The film takes
place in Climax, Nevada, and the double entrendres keep coming from there. Dean
Martin plays a thinly fictionalized version of himself (“Dino”), a boozing,
womanizing singer who rides into town and gets stranded when two wannabe
songwriters (Ray Walston and Cliff Osmond) decide that he’s not going to leave
without agreeing to sing one of their songs. Walston’s Orville Spooner, already
frightened that his much-younger wife Zelda (Felicia Farr) will fall under Dino’s
spell, decides that if Dino’s going to try to sleep with his wife, he might as
well let him think he has… by hiring local cocktail waitress/prostitute Polly
the Pistol (Kim Novak) to pose as her.

The film opens
with Dino singing and telling corny jokes in Vegas (the movie he’s making with
the rest of the Rat Pack: “Little Women”) in stunning black-and-white Panavision, but within minutes Wilder
establishes him as a smug, callous creep, someone who schmoozes with one of the
showgirls and then turns to his assistant to ask, “What’s her name, Mitzi?” (reply: “No, this one is Mitzi,” before another showgirl throws herself at him). Dino
doesn’t get any better as the film goes on, openly leering at the lacey little
number Zelda’s working on in the guest room and getting handsy with Polly (as
Zelda) in front of Orville. Martin’s performance is one of the more merciless (and funniest) examples of intentional self-parody in the movies; a smooth customer in his
collaborations with Jerry Lewis and Frank Sinatra, he’s an unapologetic dick
here, and Martin never attempts to ingratiate himself to the audience. The film
was originally released in a compromised ending that softened his final act; view its original form, and it’s remarkable that Martin ever agreed to appear this
way in the first place.

“Kiss Me, Stupid” turned a number of critics with its smuttiness, with notable fogey Bosley
Crowther of The New York Times complaining about its degenerate nature and
negative impact on society. But Wilder views the small-town people as being
just as debased as Dino, not to mention more hypocritical. Wilder gets many of the films best jokes out of Orville’s near-psychotic paranoia and jealousy about his wife’s interactions with every man in town; Zelda’s note to the milkman, her trip to the dentist, even her interactions with his 14-year-old piano student are played damn near like a Hitchcock parody. There’s a repeated melodramatic musical cue, the use of a metronome to give the scene an underlying tension (a la “Rope”), and a constant play with deep space to emphasize Orville’s mounting jealousy. Wilder sends up the era’s domestic chauvinism not just through Orville’s cynical plot to win Dino over, but through his belief that because his wife is young and beautiful, she must be unfaithful. A key exchange to his songwriting partner: “I love my wife. I adore her. I worship her!” “Don’t you trust her?” “No.”

The film’s wife/prostitute dichotomy might cause discomfort among some viewers, but if anything Zelda and Polly are the only ones who come out looking good. When Orville tries to pick a fight with his wife to get her out of the house, Zelda is comically good-natured, replying to a long tirade about her overbearing mother with “Well, basically I’d have to say you’re right.” Wilder showed in “Some Like It Hot” that anything, even sexual attraction, could be a threat (and a great joke) if it came at the wrong time, and he pushes that further in a scene where Orville, still trying to boot his wife out, is dominated by her simply because she’s shrugging off his claims of infidelity and trying to sleep with him. Walston’s constant huffing and puffing in the role is a bit much for some (indeed, one can’t help but imagine original star Peter Sellers or Farr’s husband, Jack Lemmon, in the role), but it’s highly effective in showing his psychological impotence in this scene. He’s trying to be the man of the house, but even when he towers over her, she disarms him simply by not responding as if he’s acting like a lunatic, giving him a look of “would you stop this nonsense and come to bed, already?” The message is clear: Men are too stupid to realize what they have.

Novak is even better as Polly the Pistol, doing an old-fashioned “Vertigo” role-playing routine both in the film (by “playing” Walston’s wife) and on set (by essentially playing the Marilyn Monroe character, the dizzy blonde with hard luck), adopting a husky, congested voice that makes her more world-wise character all the more vulnerable. She’s the least self-conscious of the principals, and the most sympathetic. She’s been working at the town’s seedy diner so long that she’s learned how to dodge and parry the men trying to slap her ass, and she’s had enough bad experiences with johns to be on her guard — on a man who paid $800 for her in a raffle: “The check bounced, and all I got was a case of poison ivy.” She’ll later do the same for Dino when she decides that Orville’s scheme and Dino’s advances are too cruel and undignified. Wilder and Novak get plenty of laughs out of this situation — a scene on a love seat where Novak pushes away Martin while Walston tries to ignore them shows Wilder’s mastery of physical comedy in small spaces — but they also build an argument against the caddish behavior of men against women in the 1960s.

Wilder’s most revolutionary suggestion (and the most upsetting to the likes of Crowther) is that marriage can be saved by adultery: Orville learns to appreciate his wife more through his role-playing with Polly, while Zelda finds a way to get Dino to pick up one of her husband’s songs and finds some measure of common ground with and empathy for Polly. If the film is less cold-hearted than “Ace in the Hole,” it’s because Wilder argues that male idiocy doesn’t have to be this pervasive or pronounced. He may get plenty of laughs out of it, but the final scenes show the hidden heart beneath Wilder’s cynical exterior, complete with genuine concern for the treatment of the women in his film. Orville is hysterical about his wife’s behavior, but all the moron really has to do is listen to her: “Kiss me, stupid.”

This Article is related to: News and tagged Billy Wilder, DVD / Blu-Ray