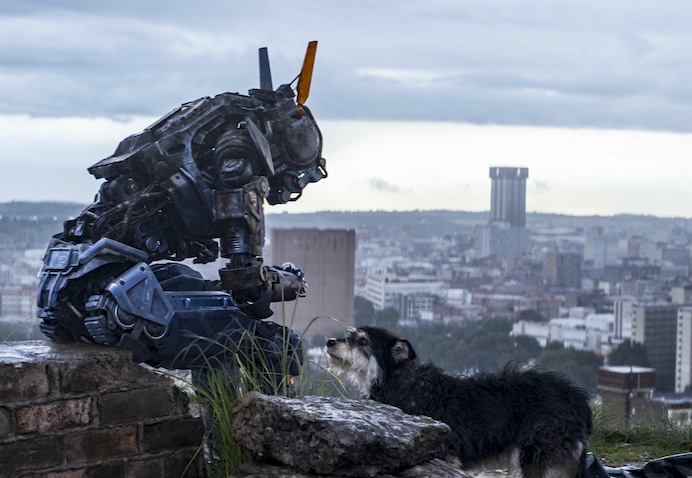 Director Neill Blomkamp is no stranger to science fiction. His breakout film, 2009’s “District 9,” was nominated for four Academy Awards, including Best Picture. It essentially boosted Blomkamp from his Indie short film roots and pushed him to the forefront. Four years later, he released “Elysium,” another sci-fi installment with familiar themes of oppression. Similarly, his upcoming film “Chappie” is set in a very near future where a robotic police force has decreased crime significantly. When one of the droids gains consciousness–the ability to think and feel for itself–a villainous engineer goes to great lengths to stop it. We were able to hear from Blomkamp and stars Hugh Jackman, Sigourney Weaver and Sharlto Copley at a recent press conference where the quartet discussed artificial intelligence, the South African setting, science fiction films and Hugh Jackman’s accent.

Blomkamp said his view of artificial intelligence changed over the course of filming “Chappie.” “I’m not actually completely sure that humans will be capable of giving birth to A.I., at least not in the way that films fictionalize it,” he said. “We don’t know why we’re here, we don’t know how consciousness is created and we don’t know the nature of consciousness.” Later, though, he was optimistic about the prospect of a robot with consciousness ever benefitting society. “There’s a lot of evidence in evolutionary sciences that show that altruism and acting in ways that are empathetic to others are actually beneficial on an evolutionary basis. So this whole notion that the robot has to declare nuclear war is one part of the discussion but it may not be reality. The reality is that maybe it can emphasize to a far greater degree than we can and experience a wider range of emotions.”

Copley, who portrays the titular robotic character through motion capture, was a tad more hesitant when it came to whether or not he’d like his own personal robot. “I would just like mine not to kill me,” he joked. “If it realized it was a superior being I would be a little nervous. I don’t think it’s a case of you could tell it to do the dishes. It’s a different kind of robot.” However, the actor did have fun capturing the character, and acknowledged the special effects department as the “real unsung heroes.”

As mentioned, “Chappie” addresses familiar themes seen in Blomkamp’s past films. But despite the similar setting to “District 9,” the director wanted “Chappie” to be its own entity. Die Antwoord, a South African rap group featured prominently in the film, was essential to Blomkamp’s planning of the setting. He said a test draft of the film was written in North America, but because the group would have felt like a “fish out of water” there, he decided to set the film, again, in South Africa, despite it being a revisit of “District 9’s” familiar territory. “I still wanted to Americanize the film as much as I could, on purpose. I wanted to go away from ‘District 9’ and not delve into the very South African themes you can get into easily in South Africa.” Blomkamp cited many little things in the film that help do that, such as incorporating Jose Pablo Cantillo, an American actor, into Die Antwoord’s on-screen gang.

Weaver, also no stranger to sci-fi, plays the CEO of the company manufacturing the robot enforcers. On how “Chappie” compared to filming her other sci-fi films, she was passionate about Blomkamp’s vision. “Sometimes people think of sci-fi as being film-light. And Neill’s films always have an underpinning of something that’s actually very important for us all to discuss and to think about,” she said. “The movie has so much to say to us in terms of what is it to be human and in a sense that word human is a hard word to define now because there’s so many inhumane acts in the film perpetrated by humans, not by robots.”

Finally, in case you were wondering, Hugh Jackman does sport his Australian accent throughout the film and apparently, even that took some research. “It’s kind of embarrassing because you’d think those sayings should be at the top of my head, I kind of looked up Australian slang and most of the ones that are in there actually came from Neill. Neill Googled it as well,” he said. “I love the idea of people being themselves in films,” added Blomkamp.

“Chappie” comes to theaters on March 6.