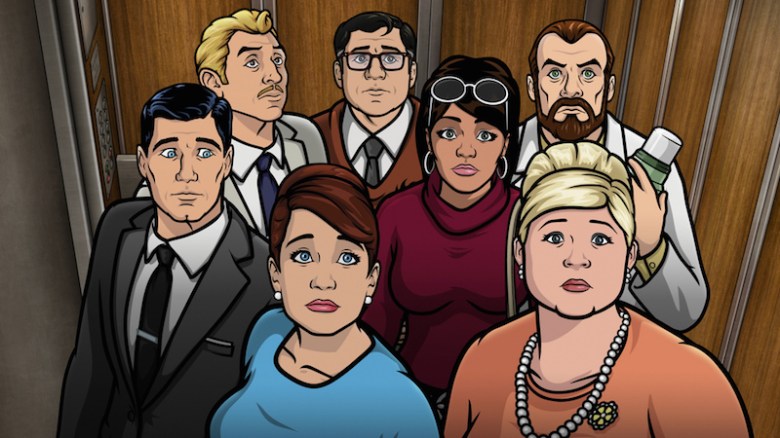 “I swear to God I had something for this.” (Summary)

The last time “Archer” did a bottle episode — Season 3, Episode 8 — the gang unknowingly helped Mallory cover up the murder of the Italian prime minister, so it’s only fitting their next solo adventure set in one room with minimal actions took place in even tighter quarters and was the fault of the same woman. Ordered to the office for an early meeting, Archer, Ray, Cyril, Lana, Krieger, Pam and Cheryl get stuck in the elevator as it attempts to take the full load upstairs. Questionable rationing decisions, incorrect accusations and spirited hijinks ensue before Mallory inadvertently rescues her team. And, it turns out the complete mental breakdown of all the captives wasn’t part of Mallory’s plan for team-building. She just wanted to watch “Vision Quest.” 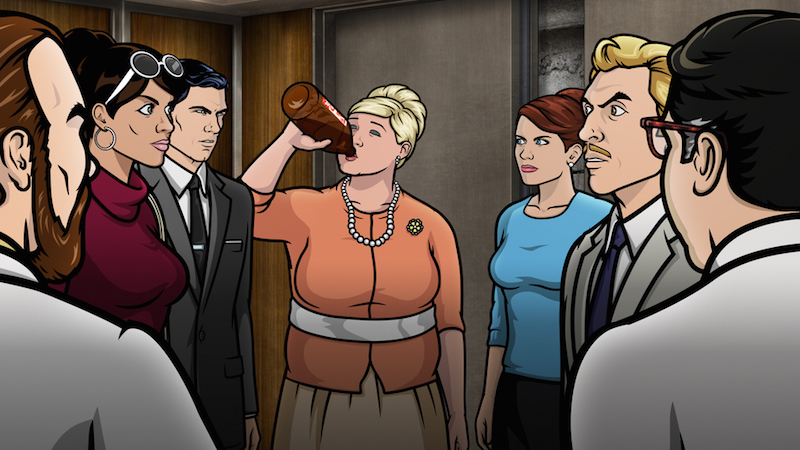 It’s gotta be Pam chugging that 40. I mean, she just went at it. I imagine even the most civilized among us would be hard-pressed not to be impressed by the guzzling, and equally annoyed and/or amused by her immediate need to go to the bathroom. Oh, Pam. Never change. 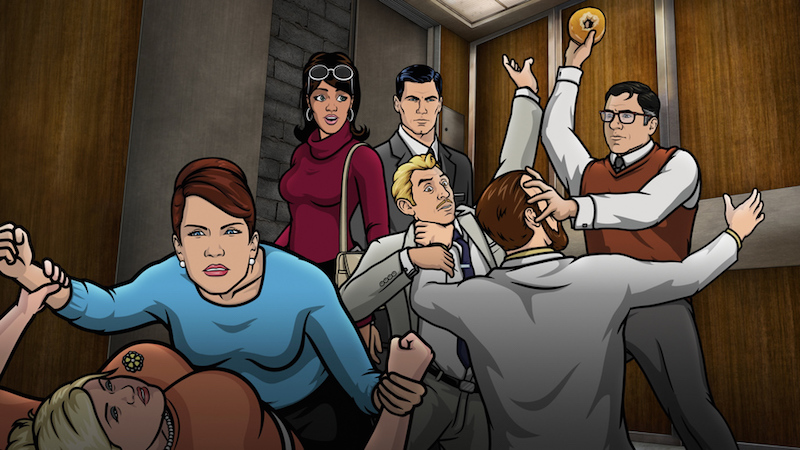 The offscreen battle that scared away poor Milton has to take the cake here. Though fancy effects shots have been the toast of “Archer” Season 6 thus far, this dialogue-driven entry appropriately skirted the VFX for a great joke. It was only a matter of time until things turned on Archer, who frankly wasn’t receiving the usual blame placed on his deserving shoulders. Then, with their one chance to get help, Archer screwed them over. The tide turned and everyone succumbed to their baser instincts.

“Well, then it’s official, the sweater vest is literally good for nothing.” – Archer
“Hey, you know what?” – Cyril
“Besides how to dress like an adult?”
“Well, that’s the only thing you do like an adult.”
“Burn!” – Ray
“Yeah, total burn. I hope I don’t start crying later while I’m driving an automobile to or from a bar!”
“After sex with a prostitute.”
“Which is the most adult thing a person could possibly do!”

(And I agree with Archer. It’s time to bring back “phrasing” so I can use the real thing, instead of these cleverly connected bits of dialogue.) 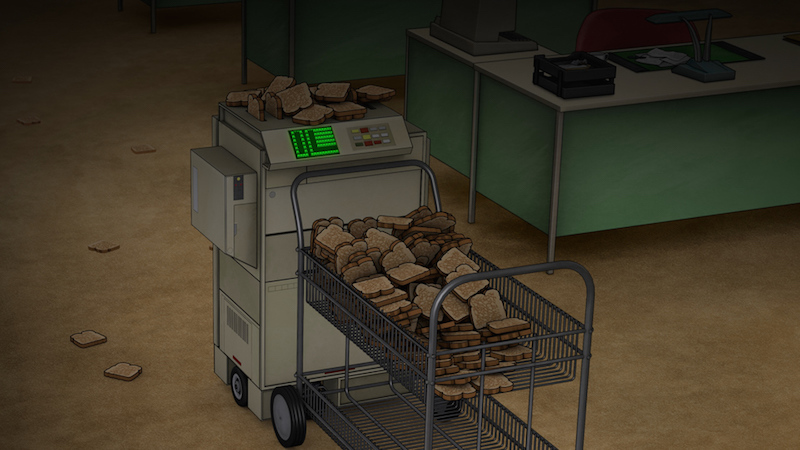 I had a strong hunch from the get go that Milton would come in quite handy down the line. No, not as a practical tool for the office, but as a reliable resource for humor. He paid off in a big way tonight, as the toast-making robot failed to bring the trapped ex-ISIS agents sustenance in their time of need. Milton may not be Archer’s innovation, but “Archer’s” creative team deserves kudos for the humorously inept device. TARS he is not, but that humor setting has to be cracking 100 percent.

“It puts the vest on the floor, we put food and drink on the vest!” – Archer, perfectly channeling the anger and unjustified frustration of Buffalo Bill from “The Silence of the Lambs” 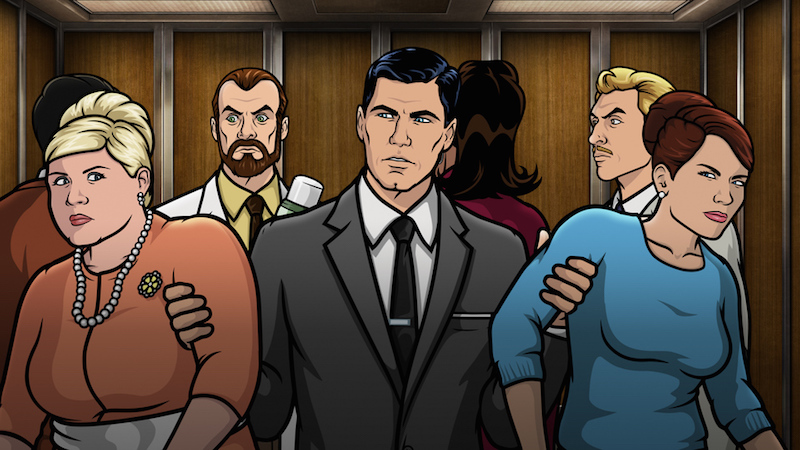 Between the callbacks to trends of yesteryear — the aforementioned phrasing and Cheryl’s exclamation of “You’re not my coal mine supervisor!” — nods to classic films and TV (see Best Quote, “Vision Quest” and the central trope) and nods to episodes past (Archer’s reference to being lost at sea is a call back to “The Heart of Archness: Part 1,” when he crashed Rip Riley’s seaplane and ate all their “cat shit”-tasting rations), Episode 5 is a figurative smorgasbord of goodies for “Archer” fans, and it’s also the best entry of Season 6.

In group interviews at Comic-Con, the TCAs and any other time the voice cast gets together, they’re always quick to point out the reason this show works so well is because of the people in that room (who, also, are rarely in the same room together). That point was emphasized here, as writers Adam Reed and Ben Hoffman did away with any extraneous characters and plot devices to solely emphasize the characters who have entertained us all over five-plus seasons. “Vision Quest” works as an homage to everyone involved with the show, as it brings out the series’ best qualities without any handicaps. Here’s hoping the rest of Season 6 — which has been average “Archer” otherwise — can live up to this high standard.