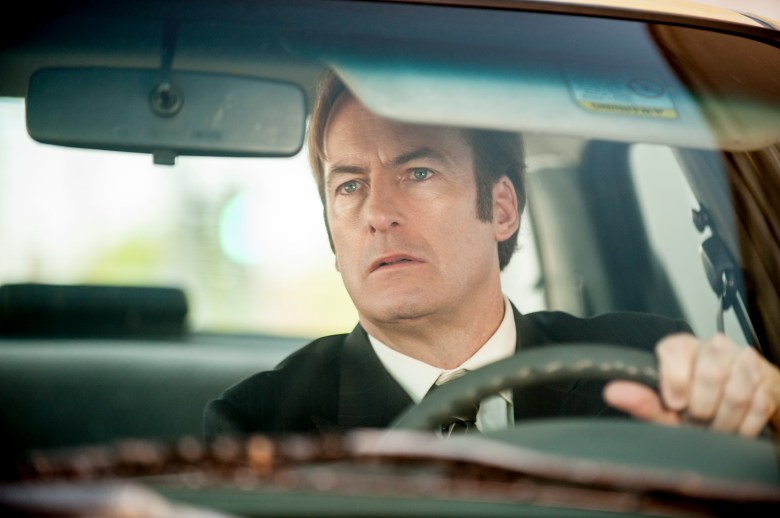 Jimmy calls up his blonde lawyer friend Kim for what he’s hoping might be late night dirty talk, but eventually becomes a confession that the Kettleman family (they of the potentially stolen million bucks) may be in danger, because Jimmy’s new friend Nacho found out about their big score. Jimmy ends up making another late-night call to warn the Kettlemans, who look out their front window to see someone in a parked car watching them.

The next morning, the Kettlemans are gone, and Kim, the cops and Nacho all think Jimmy knows where they’ve vanished to. Well actually, Nacho (after being brought in by the cops for questioning) thinks Jimmy has set him up to take the fall for another crew looking to score off the Kettlemans.

Nacho is somewhat upset about this turn of events, but he’s not why Jimmy ends up at the police station a second time: Jimmy’s ongoing battle with rules-abiding parking attendant Mike has come to a violent head. But when the cops try to use Mike to pressure Jimmy into helping them track down the Kettlemans, Mike isn’t game, and instead privately offers Jimmy a suggestion as to where the Kettlemans might be. One lengthy hike into the wilderness behind the Kettleman house, and Jimmy’s discovered the missing family — not to mention, in the final moments of the episode, the missing cash. 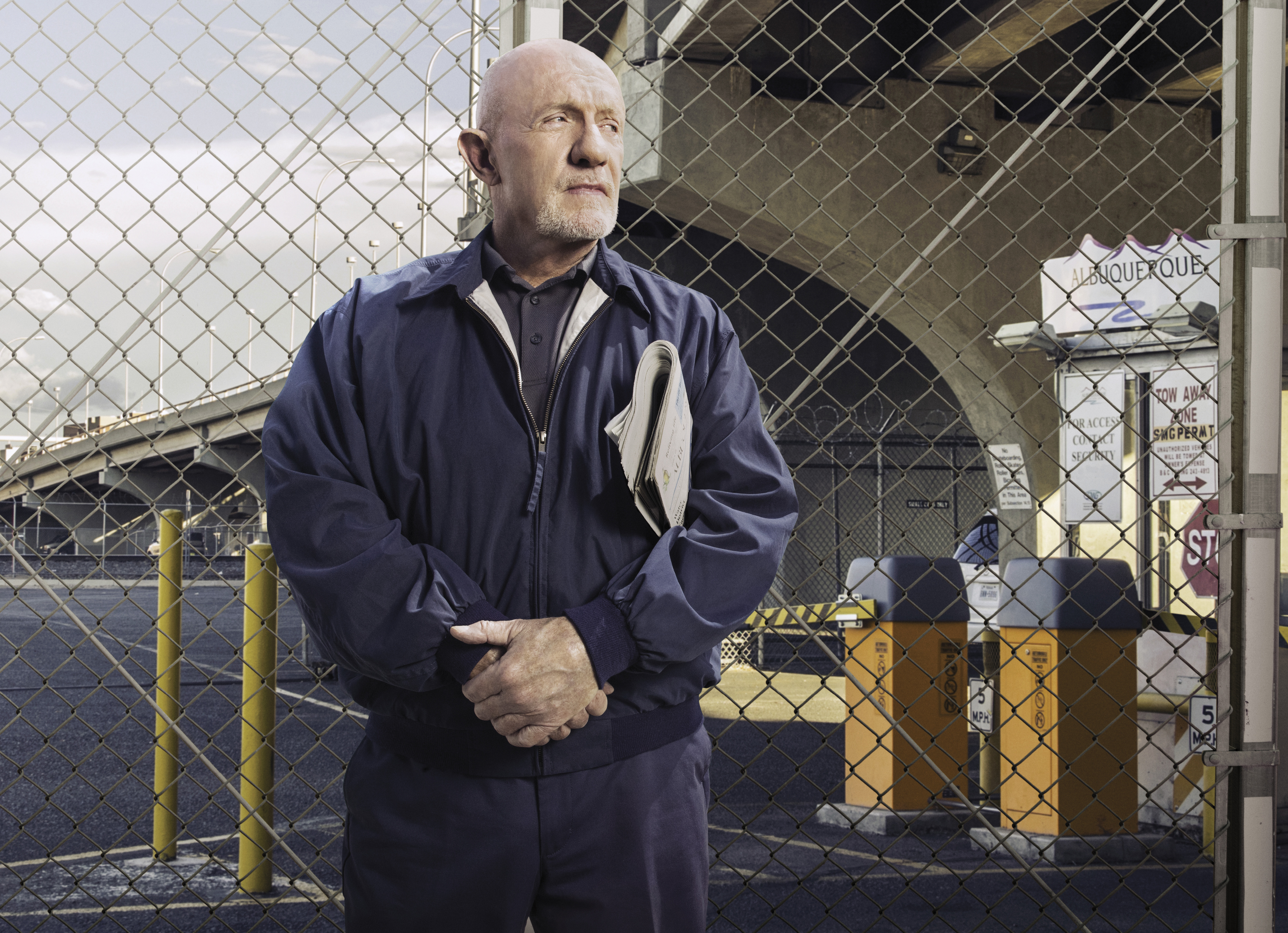 Whatever Jimmy once did in Chicago, it wasn’t good news — a screw-up so tremendous that it may have caused him to genuinely change his ways. But that doesn’t mean he’s exactly an angel these days. In the meantime, beyond skipping out on a parking fare, it’s all about what Jimmy isn’t saying or doing that puts him on the wrong side of the law. Unfortunately, that’s a pretty hard thing to prove, and it keeps him free… for the moment.

“Breaking Bad” favorite Mike Ehrmantraut finally gets a chance to shine outside his toll booth; because, in case you forgot, nine times out of 10 Mike is the smartest guy in the room. When Mike relays an anecdote from his days as a Philly detective, about a guy on the run who laid low in his own neighborhood, it’s a Columbo-level brilliant moment of case busting. And then Mike follows up his story with the observation “Nobody wants to leave home” perhaps an indicator that we’ll get more of the taciturn character’s back story at some point this season, or just a moment meant to hint at Mike’s deeply held sadness.

This week, it’s not so much the fact that Jimmy uses a pay phone to try to warn the Kettlemans and connect with Nacho. This week, it’s more the realization that there are still a multitude of pay phones around, and that they’re still a viable method for making an anonymous call. Even Walter White was using a burner phone during his more innocent and inexperienced days of drug manufacturing.

Another interesting period detail: When was the last time you told someone a phone number without mentioning an area code? It’s a subtle shift, but an important one.

Absolutely nothing, this week, but that’s because, hey, do you like flashbacks in your flashbacks? You’re in luck: That’s where “Better Call Saul” starts this week; with an even-younger Jimmy in Cook County Jail, facing multiple counts including sexual assault. What exactly he did, it’s unclear, but Chuck isn’t thrilled about having to travel from New Mexico to Illinois to set him on the righteous path. Lucid and tough, Chuck is every inch a formidable big brother — quite a long distance from the place we now find him.

On The Journey From Jimmy to Saul

Jimmy tries to tell himself that he’s not a hero, but what does he do, once the full ramifications of Nacho knowing about the Kettlemans’ “good fortune” sink in? He tries to warn the family that they’re in danger, and, then once they disappear, he’s frantic to make things right. Maybe it’s knowing that his opportunity to keep them as clients is low, that makes him willing to lose their business to preserve their safety. But his tour through the ransacked Kettleman home pulls out his humanity; if you didn’t buy that Jimmy was trying to genuinely make things, that scene changed everything. The key difference is that Jimmy doesn’t hesitate at all, at getting personally involved — far, far off from what Saul might choose to do.

Okay, it might seem a little sad that Jimmy’s late night choice of drink is the nail salon’s cucumber water, mixed with a fifth of what might be gin or vodka. But there are actually plenty of refreshing concoctions out there that incorporate a clear liquor and cucumber essence, so really Jimmy’s just enjoying a low-fi version of the same. A regular mixologist, our pal Jimmy is.

It comes almost right away: “Only two things I know about Albuquerque: Bugs Bunny should have taken a left turn there and give me a hundred tries, I’ll never be able to spell it.” Oh, Jimmy. As a writer covering a number of shows set or shooting in that damn town, I very much feel your pain on the spelling front.

“Here’s Johnny!”, that heartwarming declaration of paternal love we all know from “The Shining,” makes two very different appearances here: one at the beginning, one at the end of the episode. In the first, Jimmy is a defeated man, trying to crack jokes. In another, he’s triumphant, a hunter poised above his prey.

While this week’s episode is called “Nacho,” it begins and ends with Nacho largely offscreen, a looming but unseen threat. The decision plays, however, thanks largely to both Michael Mando’s performance in last week’s “Mijo” as well as his confrontation with Jimmy this week. Calm and reasonable proves to be even more terrifying than Tuco’s erratic and enraged management style, clarifying the very real stakes of this mess. Beyond a few key dramatic beats, “Nacho” continued “Better Call Saul’s” tendency towards quieter, character-rich storytelling. But while Jimmy tracking down the Kettlemans (after Mike’s helpful hint) came off as a bit too easy, Jimmy’s predicament seems more complicated, and intriguing, than ever.