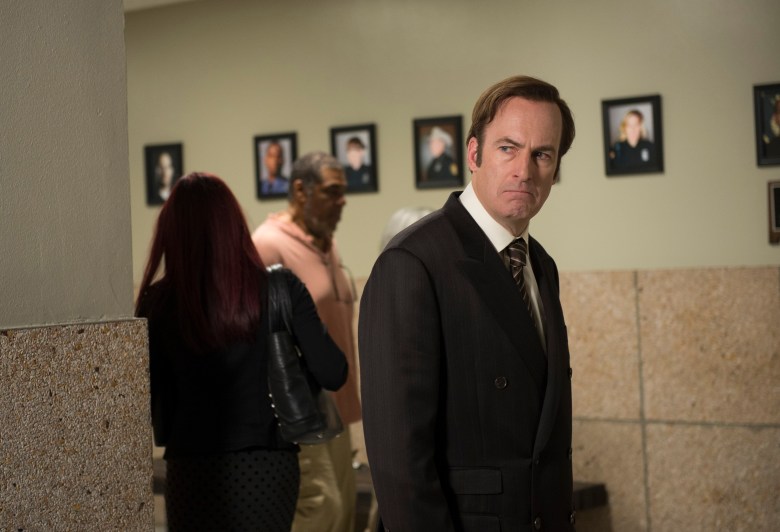 It’s a strange, strange series of events that brings Jimmy McGill his greatest victory so far. After a flashback to Slippin’ Jimmy’s less honest days, we snap back to Jimmy confronting the Kettlemans in the woods. They reject his offer of legal services, but do offer him an impressive hunk of cash in exchange for Jimmy keeping his mouth shut about their secret.

Flush with cash, Jimmy buys a new suit and Photoshops some blonde hair onto a billboard, one that directly copies the Hamlin, Hamlin & McGill logo as well as Howard Hamlin’s exact look. Despite Kim’s attempt to intervene as a friend, Jimmy ends up going to court over the issue, with Hamlin winning his demand for the billboard to be removed. That’s the best thing that could ever happen to him, though, because while filming the removal of his billboard (in an effort to drum up media interest in his “David vs. Goliath” story — his words), he happens to rescue the guy taking down the billboard, and becomes, at least for a day, a media hero with seven messages waiting on his answering machine.

One catch: Jimmy tries to keep Chuck from finding out what happened by hiding the newspaper, but Chuck manages to get a copy anyway, and how he’ll handle his brother’s “grandstanding” — as well as the horror of confronting the outside world — remains to be seen.

A drawer full of era-appropriate cell phones in technicolor. What it says about the episode? Not sure, except that for once, Jimmy’s actually getting some calls.

What’s worse: using probably stolen Rolexes to run a small-time scam on drunks, or accepting a cash bribe? The cash bribe. Definitely the cash bribe. Of course, what’s the only thing Jimmy actually gets caught doing this week? Copyright infringement.

This week, it’s literally a “tie”-in. (Sorry.) While waiting around his fancy tailor’s shop, Jimmy speculatively pairs a bright orange shirt with a bright red tie; just the sort of color palette he’ll eventually rock in his Saul persona. (And the kind of color palette that is a point of obsession within the “Breaking Bad” universe.)

In case you were wondering, “Better Call Saul” is still doing pretty good on the avoiding-anachronisms front. Jimmy makes reference to classic Silicon Valley double-speak when he tells the Kellermans, “It’s not a bug. It’s a feature!”; while the expression might not have been in common use during the early 2000s, it was definitely around. (Its exact origins are unclear, but in searching for them I tracked down this 2002 Metafilter post also trying to figure out the phrase’s origins.) And jokes about the death of print media, while maybe a bit premature, also weren’t too out of place back then.

So very much. Forget about the fact that Chuck is so anal-retentive about newspapers that he can’t survive without one day’s worth of the Albuquerque Journal; the dizzying sequence at the end of the episode reveals the depths of Chuck’s inability to manage himself on a quiet suburban street, with Michael McKean’s performance and production working together in perfect sync to drag us into Chuck’s terror. We may never get around to putting a medical definition on his condition, but it’s quite real.

On The Journey From Jimmy to Saul

Not only do we get a glimpse of Jimmy’s natural inclinations towards fashion, but we hear what might be the first chronological mention of the name Saul Goodman — or should we say, “s’all good, man.” It’s telling that an old joke of Jimmy’s will soon become his public identity; telling, and maybe a little sad.

Jimmy apparently used to enjoy pretty serious bong tokes, back in the day, but in the present it’s straight vodka. Or gin. Some basic mixology doesn’t take that much effort, Jimmy.

Weirdly, Betsy Kettleman got two of the day’s most memorable lines, both in her first scene with Jimmy. The absurdity of her attempt to justify stealing a million dollars with “You know, that used to be legal. Human slavery” is hilarious. But then she stabs Jimmy with the harshest truth possible: “You’re the kind of lawyer guilty people hire.”

The 70s movie reference this week was a bit more subtle than usual: The name on the ID Jimmy’s con artist partner uses is “Henry Gondorff,” AKA Paul Newman’s character from the classic “The Sting”; a perfect choice for the small time cons they’re pulling.

Also, while Kim is unsuccessful at getting him to see the 1982 “Thing,” Jimmy does request a hairdo “like the bath scene in ‘Spartacus.'” “Spartacus” was released in 1960; it’s a reference that opens up a new decade of film for the show to riff on.

The most notable thing about this episode, for me, was the expanding role of Kim, who’s been a fringe presence so far but got some real meat this episode. The character’s genuine good nature and fondness for Jimmy proves memorable when combined with the actor’s clear chemistry with Odenkirk.

Otherwise, “Saul” seems to be very invested in straightforward storytelling, which doesn’t allow much in the way of twists and turns (though the reveal of Jimmy’s billboard was a beautifully set-up moment). While elegant in its simplicity, it also threatens to be a real drag going forward: This episode’s grade would be lower if it weren’t for the second half of the episode, which featured not just that intense Chuck sequence, but real progress on Jimmy’s front towards achieving… well, maybe not justice against Hamlin, Hamlin and McGill. But he’s got a shot at building something now. Now, we wait to see where he takes it, and what might take it away from him.