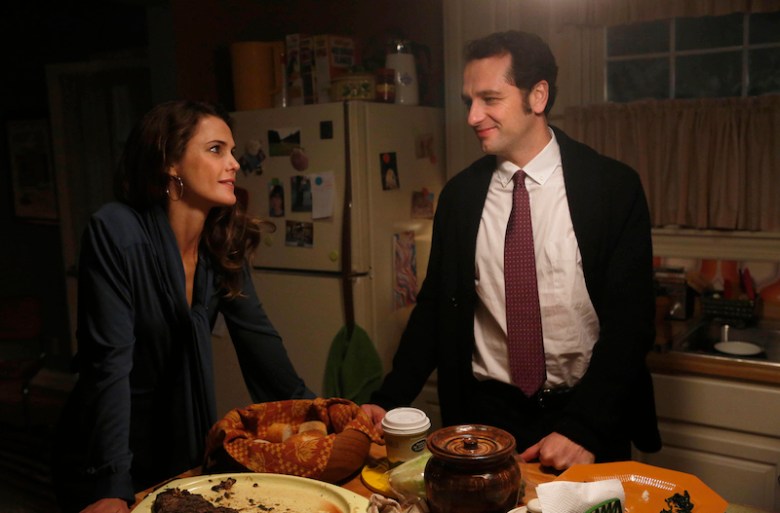 After spotting a possible way into the CIA Afghan team last week, Philip and Elizabeth start targeting Kimberly (Kimmy to her friends), a babysitter and high school student with a tendency for getting high and bar-hopping with fake IDs. Philip enters her life as a lawyer being paid by the beer companies to change the legal drinking age, but he’s more so a scurvy adult preying on a teen who prefers “older men.” One can sense his reticency to the character, but when Elizabeth dismisses any concern with labeling the CIA “a hard target,” he starts the seduction with some music and a casual arm around little Kimmy. Here’s hoping the physical nature of their relationship ends there.

Meanwhile, back at home, Paige wants to have Pastor Tim and his wife over for her birthday dinner, an event that goes about as well as one could hope. Okay, so maybe the Jennings didn’t expect to discuss their oldest child getting baptized while breaking bread with the churchgoers, but Elizabeth deserves all the credit in the world for restraining herself from shoving the scalding hot tea bags into Tim and Alice’s eyes. Honestly, I expected her own mug to crack as she casually sipped it in silent response to her daughter’s plea.

After having somewhat of a heart-to-heart with Zinaida, Stan lets his better instincts as a police officer get the best of him as he returns to their restaurant in search something to connect the Russian defector with her home country. He doesn’t come up with anything at what he thought was a drop site, but that doesn’t prove her innocence. Finally, we also get out most in-depth look at Nina yet in Season 3 as the imprisoned traitor is asked to suss out the truth behind her cell mate’s “lies.” Kudos on the fake nightmare, Nina. That might have pushed her over the edge. 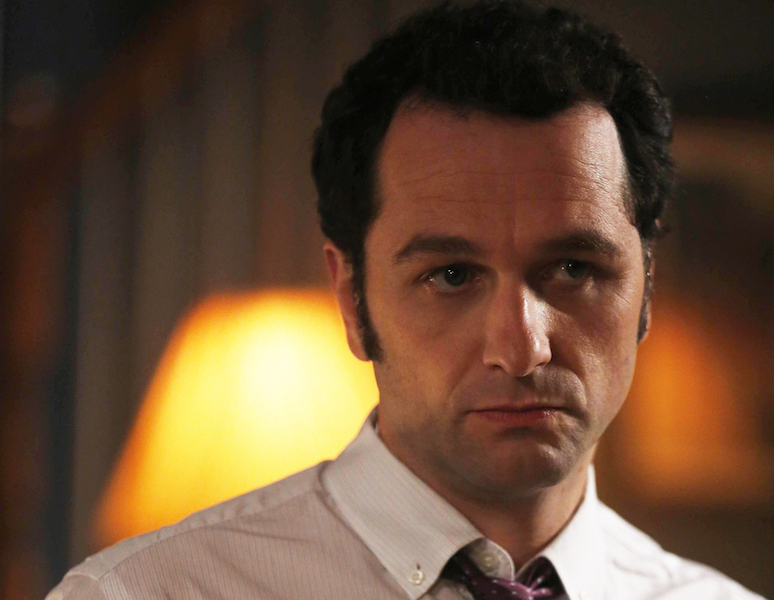 Bribing his daughter with a new record? Accusing his wife of scheming behind his back with Paige? Trying to guilt Elizabeth into letting him stop the seduction of a girl in Paige’s age range? Yeah, Philip has reached his breaking point. Nothing went well for him in “Dimebag,” even if his mission proceeded much smoother than last week. He doesn’t want any of this, and pretty soon he’s going to have to set his own operation in motion if he wants to keep his daughter from being brainwashed by religion or her mother. And it better involve more than just a new record. 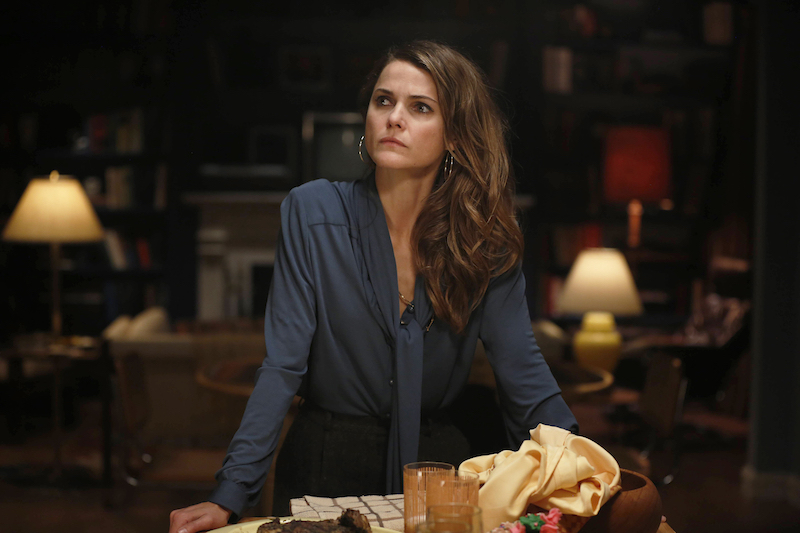 Finally! After weeks of buildup (if not months, if you count the wait between Season 2 and 3), Elizabeth came clean about her plans for Paige. “It is happening,” she said. “It is just happening, Philip. And yes, I am. I am doing it. With or without you.” Though hardly a revelation to us or Philip, Elizabeth’s brash declaration served as an act of war within the household. Lines have been drawn between the once happy couple (Remember Season 2? When they were on the same team? That was nice), and Paige is both the cause and the consequence. Elizabeth may as well have been speaking directly to her daughter, because Paige’s life is about to change whether she wants it to or not.

I’m betting Stan’s hunch proves true. So far, his gut instinct hasn’t lead him astray (as long as you don’t consider his affair with Nina originating from his “gut”): Even though he didn’t find anything in that bathroom, our favorite FBI agent isn’t likely to let one setback deter his investigation into Zinaida’s love of Milky Ways. He will find the truth, just as he finally told the truth to Sandra. Perhaps the most valuable thing he said wasn’t that he had an affair or that he loved another woman, but that he was “an asshole” in such a way that she may have believed he believed it. He certainly connected, one way or another, and for that bit of courage he earns his “savant” label this week. 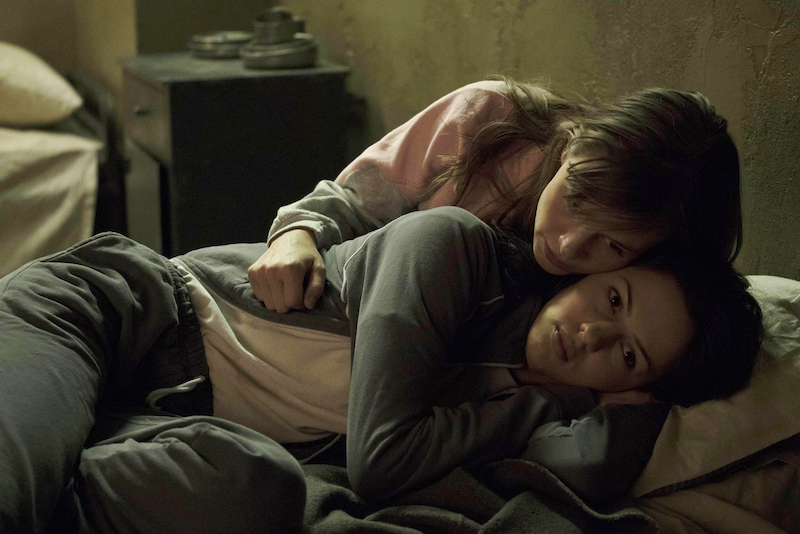 Remember Nina? Smart ex-employee of the Russian embassy? Secretly working for the KGB, then the FBI, then the KGB again? Everyone’s favorite triple agent? Many thought she might have disappeared after last year’s season finale, which found her being whisked away to a fixed treason trial in Russia. Instead, she’s back to doing what she does best — digging up secrets. Now an asset for an unfriendly Centre, Nina got to work immediately on her new cell mate in the hopes of commuting her sentence. The honest confession was a nice touch, as was her aforementioned “nightmare,” but it was Nina’s self-realization that got to me most. “I was very proud,” she said of her posting in America, with a slight break in her voice. The truth can be more deceptive than a lie, it turns out, as the all-time MVP of assets can now attest.

When “Dimebag” opened with a slow, rotating shot of Elizabeth in a spectacular ’70s shag wig and purple sunglasses, I had high hopes for more original — and outlandish — outfits. Instead, we only got two more alternate versions of the two leads. The next came when Philip introduced himself to Kimberly in an aptly sleazy mid-part and the last was seen when Elizabeth showed up to her sponsor’s house in an ugly brown, curly bob.

Quote of the Night: 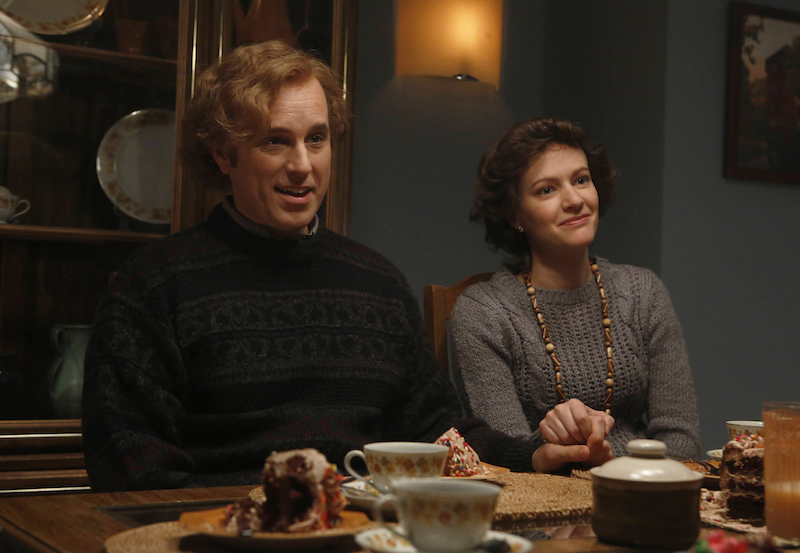 “But at least she’ll know who she is!” – Elizabeth

Elizabeth was so taken aback by Paige’s baptismal request she actually pulled a 180-degree switch on tactics. Instead of threatening Philip as she did before dinner, she pleaded with him to at least side with her regarding their daughter’s religious conversion. Part of the shock must have come from Elizabeth’s lack of knowledge. She went to church with Paige. She spoke with Pastor Tim. She put in the hours doing volunteer work and helping with community projects. Why wouldn’t Paige talk to her first about being baptized, or at least not ambush her with the news at dinner?

The division between mother and daughter was outlined beautifully in director Thomas Schlamme’s excellent slow pan from daughter to mother, placing a literal wall in between them. Elizabeth may have the secret that can break down the wall, but where will the pieces fall? Philip doesn’t want any part of it, seemingly siding with his daughter’s wishes — no matter how naive — over his wife’s preference for an earth-shattering confession.

Meanwhile, Papa Jennings is being asked to seduce a girl not much older than Paige for the same reasons he’s being told to recruit his daughter: For the cause. Philip’s moral realignment may nearly be complete, and how that clashes with Elizabeth’s reconfirmed dedication to the Centre is what makes “The Americans” as riveting as ever. Something has to give. It’s now just a matter of time.