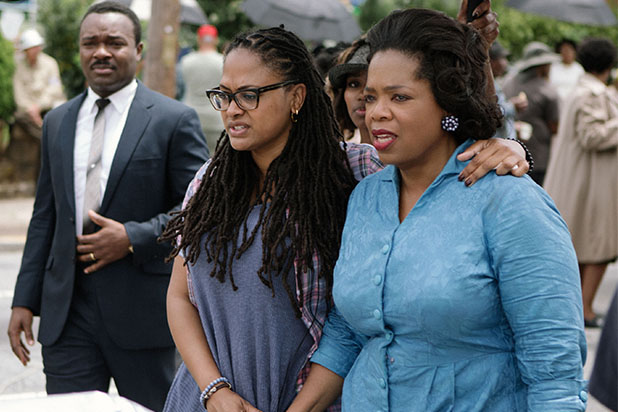 Ava DuVernay may have (unjustly) missed out on an Oscar nomination, but the director has never been in higher demand — and she’s not alone. After a recent announcement she would reteam with “Selma” star” David Oyelowo for a Katrina-set film, the 42-year-old director is embarking on her first TV project with another “Selma” star. OWN announced today a new original drama series to be written, directed and executive produced by DuVernay and starring Oprah Winfrey in a recurring role. Winfrey will also executive produce the series based on Natalie Baszile’s novel, “Queen Sugar.”

“I loved this book and immediately saw it as a series for OWN,” Winfrey said in a statement. “The story’s themes of reinventing your life, parenting alone, family connections and conflicts, and building new relationships are what I believe will connect our viewers to this show.”
“From the moment I was introduced to the book, I was captivated by the idea of a modern woman wrestling with identity, family, culture and the echoes of history,” said DuVernay. “To bring this kind of storytelling to life alongside Oprah for her network is wildly wonderful. I’m excited about what’s in store.”

“Queen Sugar” tells the contemporary story of a woman who leaves her life in Los Angeles to live in Louisiana after her father leaves her an 800-acre sugar cane farm in his will. She and her teenage daughter then go to work reinventing the farm and adjusting to life in an entirely different culture.

Winfrey was a big part in getting “Selma” made the way DuVernay had always envisioned, but it was the director who had to ask the media mogul to take on the role of civil rights protester Annie Lee Cooper. The partnership has obviously worked out quite well for both parties, as DuVernay could have potentially sold this program to a much more established and respected network. It wouldn’t be hard to imagine HBO, Starz, Showtime, FX or any other cable network clamoring for this acclaimed director’s first foray into television, but she’s chosen to keep working with the Hollywood powerhouse Winfrey, who will make her own debut as an actress on OWN (herownnetwork).

Production is slated to begin later this year, with no scheduled release date for the series.

This Article is related to: Television and tagged Ava DuVernay, Oprah Winfrey, OWN, Television