Sundance Review: 'Bob and the Trees' Documents a Rap-Loving Logger and Little Else 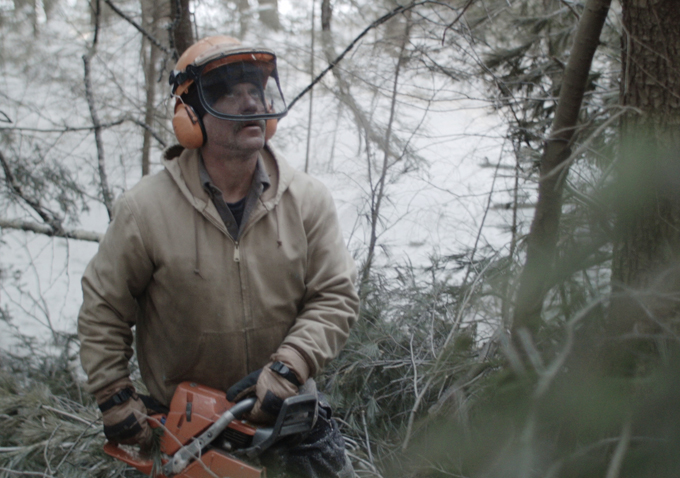 “Bob and the Trees” is director Diego Ongaro’s feature debut, adapted from his 2010 short of the same name. “Bob” is essentially a character study of Bob Tarasuk, a long-time logger and rap enthusiast living in an insular little town called Sandisfield in The Berkshires of Massachusetts. His partner in logging work is Matt Gallagher (played by Matt Tarasuk), whose contentious relationship with the bullheaded Bob is one of the central running themes in the film. Ongaro befriended Bob and his son Matt when he moved to The Berkshires, and set out to bring their miniscule story to the world on a larger scale.

In theory, this should work out well — a documentary-style narrative adaptation of a real-life story provides an undeniable sense of authenticity to the proceedings, and there is a natural, immersive quality to “Bob” that could only be born from non-fiction. However, the movie veers so close to Tarasuk’s existence that it quickly becomes — as life tends to be so much of the time — devoid of narrative trajectory.

It’s unfortunate, because the setting of the film is undeniably rich: rural Massachusetts in winter contains a quiet and vaguely menacing feel, desolate and muffled by snow. There are moments where “Bob” suggests its potential as a sparse forest tale filled with tension, but what possible momentum it could have built is squandered on the forced bareness of the story.

Tarasuk plays himself as a logger, which entails felling trees for timber, sometimes at a risk of financial loss. A crop of marked trees for a pricy commission turns out to be infested with ants, leaving the timber unsalvageable and therefore unprofitable. This is about as interesting to watch as it sounds. The sole angle of potential action enters the story when Bob finds a large gash in the side of one of his cow’s necks that suggests the presence of a larger threat, but even that development fizzles quickly and without much fanfare. In general, the movie is pervaded by the uncomfortable and unpleasant feeling of waiting for something to happen that never does.

To compare it to a similar contemporary approach, “Bob” plays like a less-interesting “Prince Avalanche,” minus the playful dialogue or buddy dynamic between Paul Rudd and Emile Hirsch to compensate for the grey backdrop and plodding subject matter. Both Bob and Matt Tarasuk are real loggers with decades of experience between them, and as amateur first-time actors, they carry a sense of long-established working relationship to the film that sometimes connects, but always falls short of its potential.

Ongaro seems to be aiming for a sealed account of a prosaic man with a prosaic occupation, but the end result is flat and ineffective. Ridiculously ordinary and uncompelling, not to mention at times disastrously crude and unfunny, “Bob and the Trees” exists in an uneasy purgatory between fiction and documentary without satisfying either tradition.

“Bob and the Trees” premiered last week at the Sundance Film Festival. It is currently seeking U.S. distribution.

This Article is related to: Reviews and tagged Bob and the Trees, Reviews, Sundance 2015, Sundance Film Festival