Sundance Review: Jonathan Gold Gets an Admiring Profile in 'City of Gold' 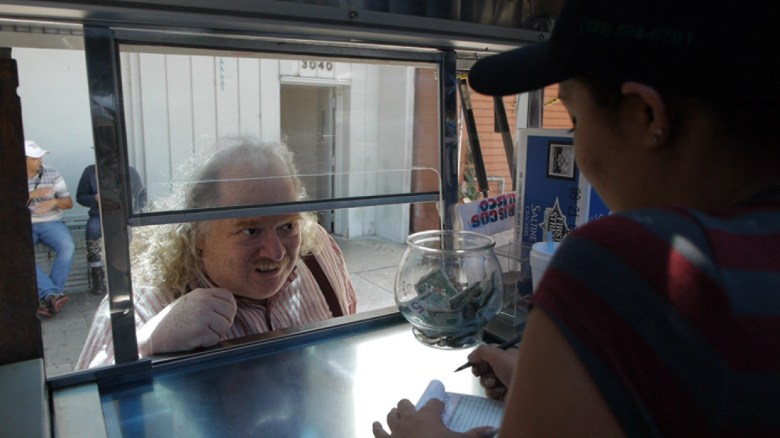 “Criticism is criticism,” says Pulitzer Prize-winning food critic Jonathan Gold in “City of Gold,” adding, “An aria is like a well-cooked potato.” The documentary on his career include many such evocative statements. With a full figure and long gray hair hanging from the back of his largely bald head, Gold seems like a wise elder statesman in the world of food criticism, wielding an invaluable influence with his words that have helped shape the democratization of Los Angeles food culture for the past 25 years.

Laura Gabbert’s portrait is not so much a love letter to her subject as it is a window into what Gold himself loves. He loves art, spices, music, and the process of discovering new gems among the cultural depths of L.A.’s rich cultural neighborhoods. Regularly bringing specific worlds of obscure cuisine to the attention of a discerning public, Gold has found massive career success in both his individual reviews and his body of work at large.

Gold’s brand of criticism is one as concerned with an objective assessment of aesthetic quality as it is with where specific objects fit within a certain time and place, which he sees as a crucial factor in the experience of dining out. It’s food criticism as an extension of a broader cultural critique (which his cumulative work demonstrates), which he believes applies equally to any other type of criticism.  It’s a very public and inclusionary service he provides that implicitly rejects the process of reviewing mostly finer cuisine.

At one point in the film, Gold mentions that not every single detail merits notice in a review. To this extent, Gabbert could have followed his advice. We see Gold and others talk about different foods, his writing process, his family, his influences, Los Angeles, his upbringing, his musical ambitions, and more threads woven together more or less without rhyme or reason. The disjointed structure makes the film feel overlong even at 88 minutes.

“City of Gold” attempts to strike a balance between the larger focus of his chronicling the vast culinary options throughout Los Angeles and more personal details, such as how Gold’s environmentalist brother convincing him to pen a piece advocating for the ban of selling shark fin in California — which proved instrumental in getting the bill passed. He is also an accomplished cellist who appreciated classic operas from a young age.

There are several such details in the film, which are interesting enough in their own right but feel mismatched in a project that never settles on the story it aims to tell: Is it about the man? Is it about the criticism? Is it about art? Is it about food as a microcosm of L.A. life? Does awareness of culture help to heal sensitive racial wounds? All these points (some more compelling than others) are hit upon throughout the film, but they  never gel together into a fully cohesive portrait. If there had been more of a central idea to build off from, “City of Gold” could have been more effective and powerful statement on one man’s devotion to his task.

Still, the film is an agreeable document of cultural processing that should especially appeal to the niche crowd at its center — it’s more or less mandatory viewing for L.A. foodies. Gold remains an intelligent voice free of pretension, which makes his thoughts as compelling on film as they are in print.  It may not be one of the most dynamic offerings in this year’s Sundance Film Festival documentary selection, but it preaches to a choir bound to devour its contents.