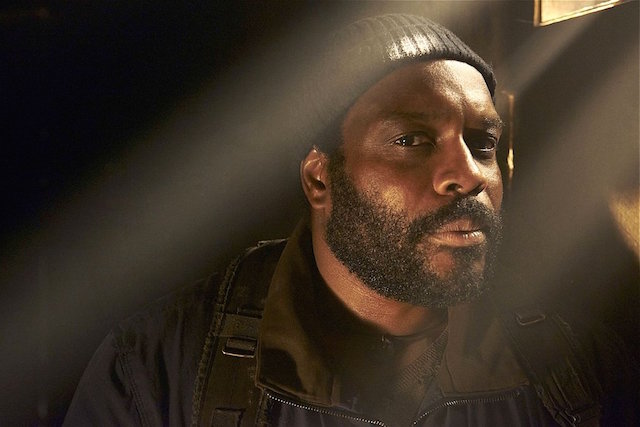 The word “pretentious” is the rhetorical equivalent of a Habanero pepper; unless used with great discretion, it can overwhelm everything around it, obscuring critical arguments (or sometimes substituting for them) in favor of an all-purpose sneer. But in the case of “What Happened and What’s Going On,” the the ninth episode of “The Walking Dead‘s” fifth season, and the first after its midseason break, it’s the only word that fits.

Like its cumbersome, redundant title, “What Happened…” is a ponderous mess, a case of a solid genre show reaching for “art” and falling painfully short. Directed by Greg Nicotero and written by showrunner Scott M. Gimple, the episode opens with a would-be lyrical sequence that looks like the work of a first-year film student, full of jump cuts and sudden over-exposures as if it were being filmed on an expiring 8mm reel. (The show is shot on 16mm, but the “film” effects look like they were rigged up in post.) The images aren’t redolent so much as overdetermined, at once clumsily symbolic and strangely opaque, laden with Meaning but not meaning much.

One can forgive a TV show, especially one whose critical respectability has never equalled its record-setting ratings, for an artsy opening gambit. It’s in the body of the episode that “What Happened…” really becomes painful to watch. Tyreese’s dying agonies were as much spiritual as physical, as he confronted his feelings of failure for the lives he’d seen lost — and even those, like Martin the Termite (Chris Coy), he’d perhaps wrongly let live. Despite his strength and physical presence, Tyreese had become one of “The Walking Dead’s” gentlest characters, unable to harden himself to the world after the outbreak, which on this show means he was inevitably going to end up dead. (The only other option would have to voluntarily surrender his soul, as his former partner in reluctance Carol did, but as the return of the late Lizzie and Mika reminded us, the two went in opposite directions after “The Grove.”) Still, Chad Coleman managed to lend a heartfelt poignancy to Tyreese’s struggle, even if it had grown awfully one-note by the time his story reached his end.

The problem, then, wasn’t Tyreese’s death, which gave “What Happened…” a satisfyingly melancholy core. It was the rest of the episode’s cringe-inducing attempts to punch above the show’s weight, thematically and especially aesthetically. Mercifully, the advance word that this would be “The Walking Dead’s” “Terrence Malick episode” turned out to be a red herring — that would have been a full-on train wreck to “What Happened…’s” five-car pileup — but you can feel it straining for significance at every step. Dialogue that aimed for poetic introspection was merely stilted and repetitive — “Did you adapt? Did you change?” — and the last-gasp insertion of Tyreese’s backstory felt like a Hail Mary attempt to up the gravitas quotient. It didn’t help that as the show acted out its latest instance of making room for a new black character by killing off an old one, the fantasy radio reports echoing in Tyreese’s dying mind vaguely evoked the Rwandan genocide (because, you know, Africa).

The gimmick of reviving dead characters, including the recently departed Beth and the late, unlamented Governor, wasn’t inherently misguided, but it fell flat in nearly every way imaginable, from the trumped-up attempt to lend after-the-fact gravitas to Tyreese’s long-forgotten promise to “earn your keep” to the flat strings of Beth’s clumsily strummed guitar. (Surely ghosts have time to tune.) Lizzie and Mika’s assurances that “It’s better now” they’re dead, and Tyreese’s dying request to turn off the phantom radio reminding him of the world’s troubles reinforced the glib nihilism that too often substitutes for genuine moral questioning in “The Walking Dead’s” universe. It’s one thing to have characters think they might be better off dead; another entirely to agree with them.

“The Walking Dead”s fifth season began as its best yet, but after its slow leak of a midseason finale and this botched return, the momentum shows serious signs of flagging. The show has never had trouble finding high points; it’s holding on between them that’s been hard. The full-circle aspect of the season’s first half seemed to be clearing the decks for a new beginning, which now includes Rick’s group’s long-delayed exit from the state of Georgia and a recalibrated goal of reaching Washington, D.C. But let’s hope that “The Walking Dead” doesn’t lose sight of what it does well, and what it shouldn’t be doing at all.

Taken on style alone, this is a haunting, frequently mesmerizing hour of television.Ah, but then you put the script back in, and things get tricky. Done well, a character death can provide a major push forward for a series, throwing off a potentially tired status quo and driving characters to act in unexpected (and often shocking) ways. But two deaths like this, one on top of the other, and it’s hard to keep invested in what happens next. This is a show where a character hallucinates the ghosts of his past, and those ghosts tell him dying is better — where, given the context, it was almost impossible to find any reason to argue with them.

It’s hard to pull off a long sequence where a character converses with hallucinations without it feeling self-indulgent, and I don’t think this one cleared that bar, no matter how good Coleman was.  Mostly, though, “What Happened and What’s Going On” was a reminder of how difficult it is to sustain the narrative of this series without simply wallowing in misery. This really is a world without much hope, and the show hasn’t flinched from that, but the characters need some sense of direction or immediate conflict, for the show to avoid feeling like something where everyone on screen would be better off just blowing their brains out.

An episode that took a deep dive into the barely conscious, barely hinged brain of Tyreese — and in the process, an episode that pushed the show further into its post-prison Renaissance, complete with a series of impressionistic visuals (by episode director/zombie wrangler Greg Nicotero) and a loopty-loop narrative that was both the final statement on a key character and a melancholy postscript to the events of the midseason finale.

Tyreese’s death — coming so soon after Beth’s for our gang, even if it’s been two months in real time — will certainly impact the characters, but at this point, the show seems to be piling misery on top of misery. If Tyreese had survived, would it have somehow made Beth’s death less impactful for our group? Is her loss now somehow more meaningful because another one came right after it? Of course not. Cynically speaking, I’m inclined to believe that the writers thought that viewers would be lulled into a false sense of security in the midseason return, thinking that there was no way we could lose another character so soon after Beth’s death, and thus allowing them to prove that they still have the ability to surprise us and maintain narrative tension by killing one of the group’s strongest fighters.

But my reaction when Noah’s brother pounced out of nowhere and took a chunk out of Tyreese’s arm wasn’t a gasp of shock, it was an eyeroll of frustration.

“The Walking Dead” is always weakest when the show does a lot of maundering on about how death and fighting and always moving around and never feeling safe is so painful. The dialogue tends to get purple. (Michonne: “Don’t you want one more day with a chance?”) The imagery becomes hokey. (That recurring framed painting of a pretty suburban house with drops of blood plopping on it.) “The Walking Dead” has never been a show whose strength resides in its ideas or its dialogue. Its entertainment derives from the mindless spectacle of seeing zombies get offed real good. If last night’s episode was intended to signal the path the show is now taking, the hundred-mile journey to Washington is going to be a long, gassy ride.

Ultimately, though it’s the same drum being beaten, this premiere really did drive home the “we need to find a safe place” point thoroughly. Not only is death-by-random walker bite always going to be a possibility, but eventually everyone’s going to slip up. Even Michonne got thwarted, in a single instant, by a piece of rebar in a walker’s neck and had to be saved. Her all-powerful katana, that we all take for granted, would have gotten her killed. So either the group finds a new place, and finds it fast, or the usual gaps between big show deaths will keep shrinking until no one’s left.

From beginning to end, this episode toyed with viewer’s emotions, from the presumed funeral for Beth Greene, to the emotional breakdown of Noah upon seeing the burned-out shell of his hometown, to the dead-eyed reactions of Rick & Co. upon seeing scores of Walkers cut in half and scattered about, to the final moments where it looked like Tyreese was going to make it, only to have him fade away at the very end. It’s the character focused episodes like these that make “The Walking Dead” not just the most popular show on TV, but one of the best.

The cold open is a seemingly-unrelated jumble of images that build to blood dripping on a picture of a house. It’s off-putting and ominous, not unlike the single-shot opening of Season 4’s “The Grove” — which is appropriate considering Lizzie and Mika are part of the mix. Unfortunately, these images are cycled through several more times as the episode progresses, with increasingly diminishing returns. Sure, we get context for a lot of them, but how many shots of that skeleton do we really need to drive the point home?

This Article is related to: Television and tagged Terrence Malick, The Walking Dead