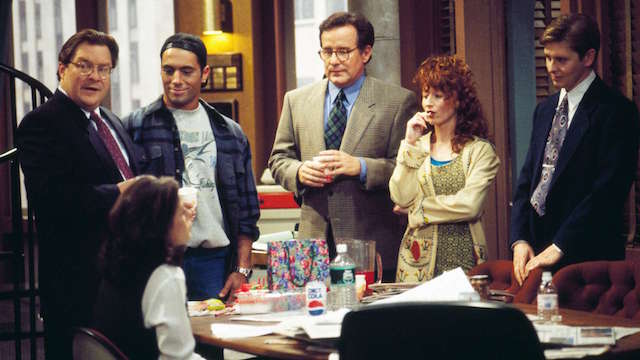 What’s the best sitcom of the 1990s? Most would argue “Seinfeld,” some “Friends,” maybe a few wiseacres “The Larry Sanders Show.” But ask someone who really knows their stuff, and you might get a different answer: “NewsRadio,” which starred Dave Foley as the harried general manager of a New York radio station, amid an ensemble that included Phil Hartman, Maura Tierney, Stephen Root and Andy Dick. Vox’s Todd VanDerWerff flies the flag:

To me, “NewsRadio” outdoes those shows. It’s a show that’s at once deliberately classical, engaged with and appreciative of TV history, but also free-form and loose. It turns one of the most low-concept premises ever — here are some funny people who work in a New York City radio station — into big laughs and (dare I say it?) high art. Plus, it turned 20 on March 21, 2015. It’s as good a time as any to revisit its legacy.

“NewsRadio” is a show you’ve likely not seen, unless you’re a diehard devotee like me. Though the entirety of its five-season, 97-episode run has been collected on DVD, it appears only sporadically on streaming sites, episodes floating on and off of them like some sort of beautiful sitcom Brigadoon. The show, always low-rated during its run on NBC, largely succeeded in spite of its treatment at the hands of the network, where it would have 11 different timeslots in those five seasons. If you saw NewsRadio, you either sought it out or stumbled upon it by accident.

And yet it’s rare for me to find people who’ve seen NewsRadio and aren’t extremely passionate fans of the show. It inspires raves. You’re either a fan, or you haven’t seen it.

Like VanDerWerff, I stumbled on NewsRadio in the spring of 1995, knowing only that former (and future) Kid in the Hall Foley was among its cast. Unlike him, I was a near-total ignoramus to the world of situation comedy, having grown up in a house where TV viewing was restricted to the weekend. But even with no more grounding in the art form than the previous summer’s repeats of “Grace Under Fire,” it was clear that NewsRadio was something special. Here was a show that, rather than expecting its audience to ignore the strangeness of a multicamera sitcom — the vast, expansive rooms where all furniture mysteriously faces the same way — and instead played into it, crafting episodes with the breakneck absurdity of classic farce. And as is often the case, it played best when played straight, especially by Foley and Hartman, who took everything he’d learned in his years as “Saturday Night Live” and channeled in into a single character: Egocentric anchor Bill McNeal. There are many tragic aspects to the way Hartman’s life ended, but among them was that a lifelong chameleon — SNL’s fabled “Glue” — had found a new way to express himself, and was at his absolute creative peak. The idea of a white personality putting on a “street” voice to sell products to black consumers wasn’t untilled comic soil, but watch the guileless ease with which Bill snaps out of the act after doing a live spot for the fictional Rocket Fuel Malt Liquor:

As VanDerWerff points out, NewsRadio’s eight characters — the ensemble was rounded out by Joe Rogan, Vicki Lewis and Khandi Alexander — formed a seamless ensemble, perfectly calibrated to each others’ rhythms. Hartman’s murder dealt the show a blow from which it could never recover, but the pieces began to wiggle even before that, when Alexander tired of playing the stern black foil in a workplace full of self-obsessed nutjobs. She was right that her role was limited, but it was still crucial, and once she left, the clockwork never ticked with quite the same precision. Jon Lovitz did his best to fill Hartman’s shoes in the fifth season — he’d already guest-starred twice as two entirely different characters, yet another example of the show’s utter disregard for reality — and the network made a game attempt to position Lauren Graham as a replacement for Alexander, but nothing truly worked. For three seasons and change “NewsRadio” was perfect, and nothing else would do.

Moved from time slot to time slot throughout its run, “NewsRadio” was a perpetual “bubble show,” so much that showrunner Paul Simms closed the show’s third season with an episode in which the entire cast but Hartman and Dick was inadvertently killed. (The episode also took place on a space station instead of on a radio station; it’s a long story.) But if its audience was never large, it was loyal, tracking the show around the dial in the pre-DVR era — and once you’re a fan, you’re a fan for life.

At Yahoo!, Dave Nemetz suggests 20 episodes to get you started, although not how to watch them, which proves a surprising elusive goal. Perhaps the best, and certainly the easiest, place to begin is with the Season 4 classic “Super Karate Monkey Death Car.” (The entire run is also available on DVD, where you can find my personal favorite episode, “Arcade.”) You can also peruse Libby Hill’s suggestions for the 10 best episodes at the A.V. Club, and while there be sure to peruse Donna Bowman’s invaluable “T.V. Club” posts, which take on the complete series, two episodes at a time.