How a Comedy Like 'Jane the Virgin' Inspires Social Discussion 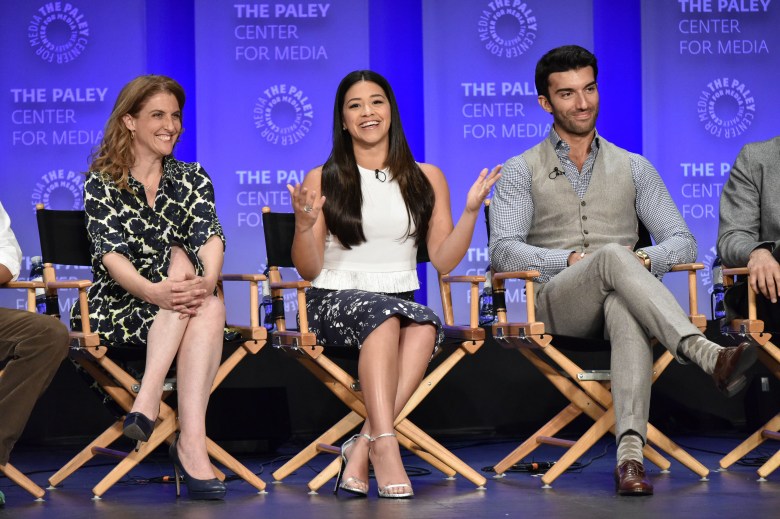 Gina Rodriguez and the ensemble cast of The CW’s telenovela-inspired romantic comedy “Jane the Virgin” made their first appearance at PaleyFest LA Saturday afternoon, and boy did they leave a mark.

READ MORE: Why Jane the Virgin is TV’s Newest Superhero

The panel began with what seemed like an endless stream of smiles and laughs, as the tight-knit ensemble teased and praised each other, while everyone on the stage showered praise upon leading lady Rodriguez, whom Urman called the show’s glue.
“I found an opportunity to really speak about a subject matter and talk about a culture that doesn’t really get recognized and definitely not as the hero,” Rodriguez said when asked about what drew her to the show. “It was an opportunity to talk about a woman, being strong, women’s choices, and talking about a dual identity that’s true for 54 million-plus people.”
Camil induced laughs when the discussion turned to his character Rogelio, Jane’s eccentric but lovable father, whom Wieselman called “a well of magical insanity, like the egotistical #lovinggift that keeps on giving.”
Urman smiled as the audience excitedly gasped when she teased that Rafael’s sister Luisa, the batshit doctor who artificially inseminated Jane with the wrong sperm in the first place, “comes back with a bang!”
There were coos and sighs from the mostly female audience when Baldoni, looking fit in a light suit, talked about the show’s parallels with his own life. It turns out his real-life wife is also pregnant. Joking that his life is now “pregnancy, 24/7,” Baldoni said he feels as if the show is magic.
Urman discussed the show’s use of fantasy sequences and magical realism as storytelling vehicles, saying the devices work because of the show’s format as an “episodic movie” and the strong delivery vehicle Anthony Mendez’s “Latin Lover Narrator,” who is now a complete, multi-dimensional character, provides.
The tone of the discussion turned more serious when the cast discussed the show’s ability to serve as a voice for underrepresented minorities and as a vehicle to present social issues. Rodriguez and Navedo both held back tears when Rodriguez’s Golden Globe victory came up.
“I felt the entire cast up there with me, every little girl who’s always wanted to be something,” Rodriguez said through tears before joking about her false eyelashes sliding down her face. “There is no right way, but society loves to decide for us. We judge ourselves based on that and I was so afraid because I didn’t fit that and I didn’t think my dreams could come true, but they did.”
Speaking about the show’s capacity as a platform to discuss social issues, Coll, who plays Jane’s sassy but stern grandmother Alba, addressed her character’s status as an illegal immigrant to thunderous applause from the audience.
“I am so happy that I represent so many immigrants who come to this country and work so hard — we are part of the fabric of America,” Coll said. “It’s not just about ‘these Latinos.’  I am representing a demographic that exists. I put a human face on the hundreds of thousands of illegal aliens who are here who are not criminals, who are hard-working people.”
Urman, who is not Latina, was asked how she crafted realistic characters in a culture she is not a part of to which she replied that it’s about specificity.
“The more specific the character is, the less likely they are to be stereotypical,” Urman said. “I think it’s about writing people, not writing race, but also understanding that it’s one of the many components that make characters.”
Rodriguez echoed Urman’s thoughts and praised the show’s ability to touch viewers across demographics, adding that it’s important to write characters as human beings first.
“Jane the Virgin” airs Mondays at 9pm on The CW.