SXSW Review: 'Uncle Kent 2' is the Craziest Movie Sequel Ever 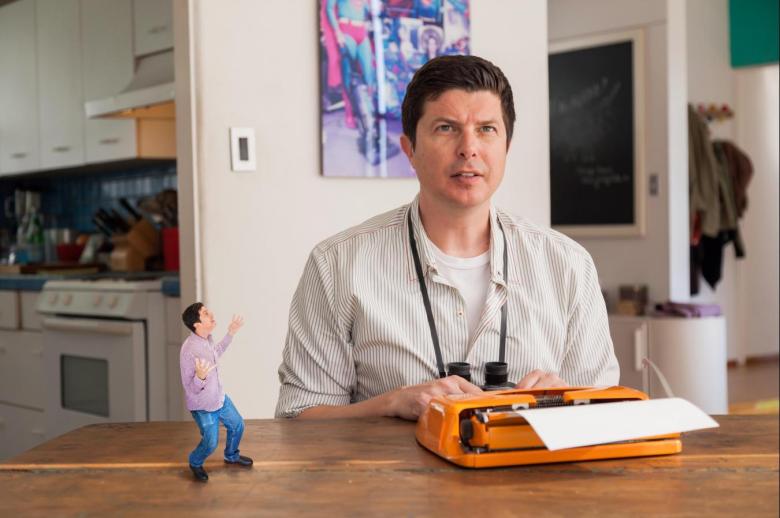 At first, “Uncle Kent 2” presents itself as a prolonged inside joke on the microbudget American film scene — the kind of referential conceit with the capacity to please the same limited crowd familiar with the movies in question. But that barely gets to the essence of this deliriously strange and hilarious stoner comedy, which delivers one innovative dose of absurdity after another with a liberating energy that never slows down. In its relentless silliness, “Uncle Kent 2” provides the ultimate rebuke to formulaic storytelling, but it’s less heady than pure head trip.

The title refers back to Joe Swanberg’s 2011 portrait of animator and perennial indie actor Kent Osborne (whose other credits include Swanberg’s “Hannah Takes the Stairs”), a genial look at the fortysomething bachelor, pot-smoker and animator as he lazily surfs the internet for companionship. “Uncle Kent 2” begins with Osborne, lonely and perpetually stoned as ever, pitching Swanberg on a follow-up. “I don’t want to be a dick, but I hate sequels, man,” Swanberg declares at a house party.

That self-aware assertion arrives during the straightforward 12-minute prologue, directed by none other than Swanberg himself. The endearing gamble of the remaining movie involves the extent to which Osborne and eventual “Uncle Kent 2” director Todd Rohal handily overcome Swanberg’s challenge. While the first “Uncle Kent” was a likably subdued look at arrested development per Swanberg’s standard focus, “Uncle Kent 2” gives Rohal his due. The anarchic filmmaker’s “The Catechism Catacalysm” and “The Guatamelan Handshake” showed a penchant for surreal dark humor, for which “Uncle Kent 2” — which Rohal directs from “Adventure Time” writer Osborne’s script — takes to a new level of outrageous comedic misdirection.

Dejected after Swanberg shoots down his idea, Osborne returns home, where the frame suddenly widens from the rectangular 3:4 ratio to widescreen, and the narrative undergoes a similar transformation. It’s here that Rohal takes on the controls and steers the movie into crazytown. With the ensuing musically-inspired credits sequence set to bouncing male breasts and animated title cards by “Adventure Time” creator Pendleton Ward, “Uncle Kent 2” launches a sensorially disoriented hourlong odyssey in which Osborne seeks artistic satisfaction and instead gets lost in the deranged extremes of his own mind. The existential hook suggests the metaphysical elements of a Charlie Kaufman script, and while “Uncle Kent 2” never burrows that deep, it maintains the entertaining sense that anything weird and amusing could happen with each passing moment — and often does.

The story builds toward a chaotic finale at San Diego Comic Con with a series of odd plot twists, including Osborne’s inability to get the pop song “Break Out” by Swing Out Sister from his head. In the hopes of curing the auditory delusion, he visits a doctor (the reliably dopey Steve Little of “Eastbound and Down” as well as Rohal’s “Catechism” and short film “Rat Pack Rat”) whose cryptic advice involves a prolonged quotable gag that only serves to further Osborne’s baffled state.

From there, Osborne heads to an increasingly bizarre Comic Con experience where’s stalked by a cartoonishly bug-eyed fan, pursues a romance with a woman dressed like the star of his web series “Cat Agent,” and engages in a rambling discussion of futurist Ray Kurzweil’s singularity concept. Follow the bread crumbs to a canny look at creative block or just roll with it. The only certainty is that “Uncle Kent 2” has been engineered to barrel through one insane twist after another, until it becomes impossible not to sympathize with Kent’s confused state.

Deeply peculiar but never high-minded, “Uncle Kent 2” is both disorienting and eager to please. The blend of sophomoric goofiness and genuine otherworldly ingredients hints at the same tricky balance found in Osborne’s main gig, “Adventure Time,” but also shows Rohal’s capacity to toy with expectations at every turn. As with “Catechism,” the ebullient tone is regularly off-set by hints of darker, unsettling forces at work. (Think David Lynch doing slapstick.) The closest point of comparison might be the viral sensation “Too Many Cooks,” which similarly took a familiar cultural template to nutty extremes. “Uncle Kent 2” seemingly grounds its story in Osborne’s plight, with his shy temperament and tender smile creating the illusion of normalcy, while zany events lurk around every corner. At times it seems as though the movie is simply chugging through a series of non-sequiturs — why not include a dream sequence where naked Kent chases after a pair of water nymphs — but that also contributes to the movie’s persistent charm.

A defiantly unconventional crowdpleaser, “Uncle Kent 2” also marks a significant bounceback for Rohal, who stumbled with  ill-received 2012 Patton Oswalt- Johnny Knoxville comedy “Natural Calls,” an uneven romp that reeked of compromise. “Uncle Kent 2” is devoid of it. More than that, it offers a coy assessment of the frustrating search for originality that plagues the American film scene, with cameos of indie stalwarts including Swanberg, filmmaking couple Sophia Takal and Laurence Michael Levine, actor Robert Longstreet and original “Uncle Kent” co-star Jennifer Prediger blending the sea of voices into spiraling disorder.

“Uncle Kent 2” premieres this week at SXSW. It is currently seeking U.S. distribution.