Why 'Mad Men' is Really All About Being Jewish 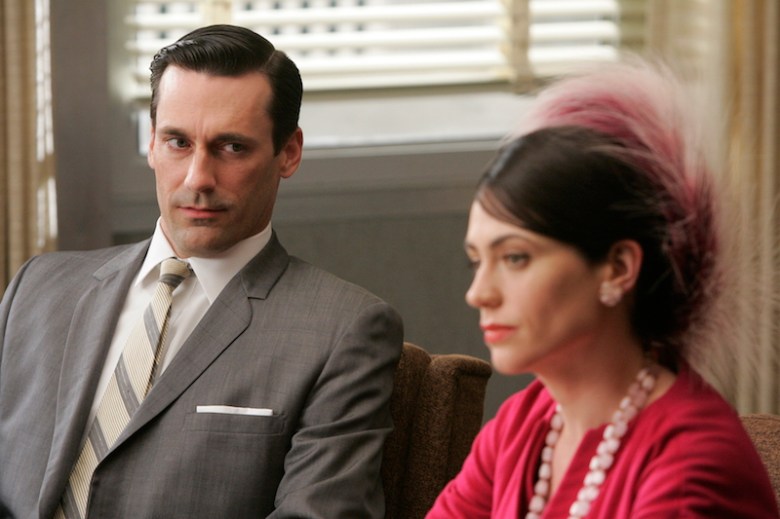 At its core, “Mad Men” is about intersectionality; the hierarchy of oppression — be it
gender, race or class — that each character attempts to break from. There
are different levels of it. Peggy Olson is a white, middle class,
Catholic-raised woman fighting for power in a male-dominated industry. But then
there’s Rachel Menken, a department store owner who’s not only marginalized for
her gender and rare position of power, but also for being Jewish.

Sunday evening,
in anticipation of the final seven episodes, “Mad Men” creator Matthew Weiner
sat down with Rogerebert.com editor-in-chief and New York Magazine TV critic
Matt Zoller Seitz at the Museum of Jewish Heritage in New York to discuss the
role Jewish identity has played in the crafting of “Mad Men.” And surprisingly
enough, it appears to be one of Weiner’s greatest influences.

READ MORE: 7 Clips That Define ‘Mad Men’ & What the Cast Has to Say About Them

It’s
surprising because the drama, which explores the personal and professional
lives of individuals working on Madison Avenue in the 1960s, has few Jewish
characters. In its early seasons, there were fans and critics who wondered if
Don’s ambiguous past, and his contempt for it, would culminate in us finding
out he was Jewish (alas, he’s just an impoverished country boy). In actuality,
there’s really just Rachel Menken, a prominent figure in Season 1, Roger Sterling’s
young wife Jane Siegel and later Michael Ginsberg, the eccentric copywriter who
joins Don’s new agency in Season 5. Otherwise Jewish representation on “Mad
Men” has appeared to be scarce.

This
is not really true, however. Like everything wonderful about “Mad Men,” Weiner pushes us to dig deeper. In “Smoke Gets in Your Eyes,” the pilot episode
of the series (which will air its last few episodes on AMC starting April 5),
Roger Sterling and Don Draper joke about a prospective client, Menken’s
Department Store. The two wonder why the company, owned and operated by a
Jewish family, isn’t taking their business to a Jewish advertising agency. “You
want me to go down to the deli and grab somebody,” Don jests. He expresses an
anxiety that his agency, his people, won’t be able to communicate with
Menken’s. 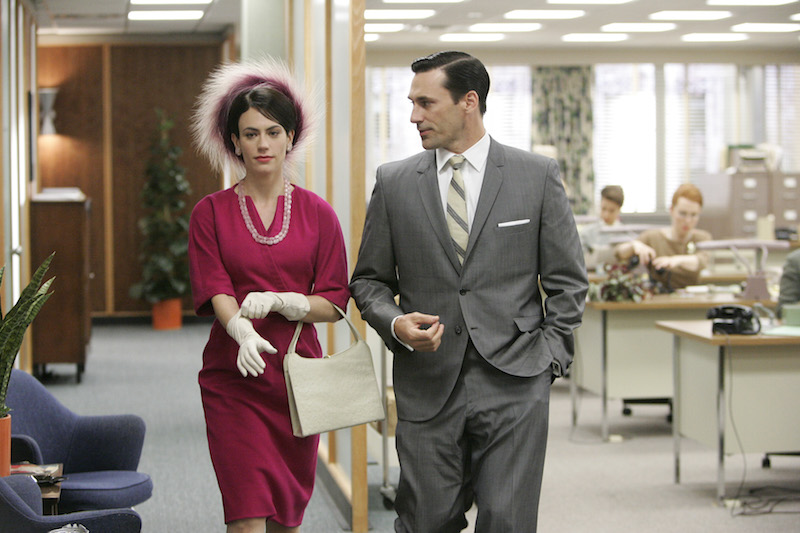 It’s a risky bit to include, especially for a pilot episode,
a move Zoller Seitz questioned Weiner about right after a screening of the
clip. “This is right out of the gate. This isn’t something that you waited four
or five episodes to take the audience gently by the hand.”

And
the joke is not the only instance of oppression Weiner has in his first
episode. It’s not the first either.

“The opening scene of the show is Don
interviewing this African-American man, who it says in the script is too old
for his job and his uniform is too tight. And the proprietor of the bar comes
over and asks if he is bothering Don because they were having a conversation.
And Don starts interviewing him in a non-condescending way. He is doing market
research,” Weiner said. “And at the end they bond over the fact that women are
dumb because they read magazines. That’s part of what they used to call ‘out-group denigration.’ People are brought together by their prejudices and
their hazing and so forth. There’s a lot of hazing and a lot of segregation and
the story of the show to me was, ‘Hey. Did you forget?'”

“Mad
Men” is at its highest form when it explores these hypocrisies, the deeply
imbued institutional frameworks that make us act the way we do. For Weiner,
Jewishness is at the forefront of this tension (all the while he acknowledges
the privilege Jews have in being able to pass). He jokes how his parents were
lucky he never looked Jewish and expounded upon his time in high school — where
he was one of few Jews — and his college years in Wesleyan, where there were
virtually no Jews. This “am I an ‘insider’ or ‘outsider'” anxiety touches
upon the essence of “Mad Men.”

There’s
a scene in “Babylon,” a highlighted episode in Season 1, where Don seeks Rachel
out for advice. Israel’s Board of Tourism has sought Sterling Cooper out to
help with their marketing and Don knows little about the newly formed country.
So he uses it as an opportunity to see Rachel, the women he desires, but also
his token Jewish friend. During their lunch meeting, Rachel reveals she knows
little about Israel, asserts that she believes it should exist for her people
even though she herself would never live there (a common thread and source of
guilt for many Jews), and ultimately asserts, “I’m American and not very Jewish.” Here, she expresses the sort
of fugue that really encapsulates what’s at “Mad Men’s” center, for every character.

“My
mother-in-law is a Holocaust survivor. My parents are from the generation
before that. Their identity is the same story as Don’s identity,” Weiner said. “‘How
do we become white?’ How do I get my kid to go to Wesleyan so he can be in that
law firm? What’s it going to take?” 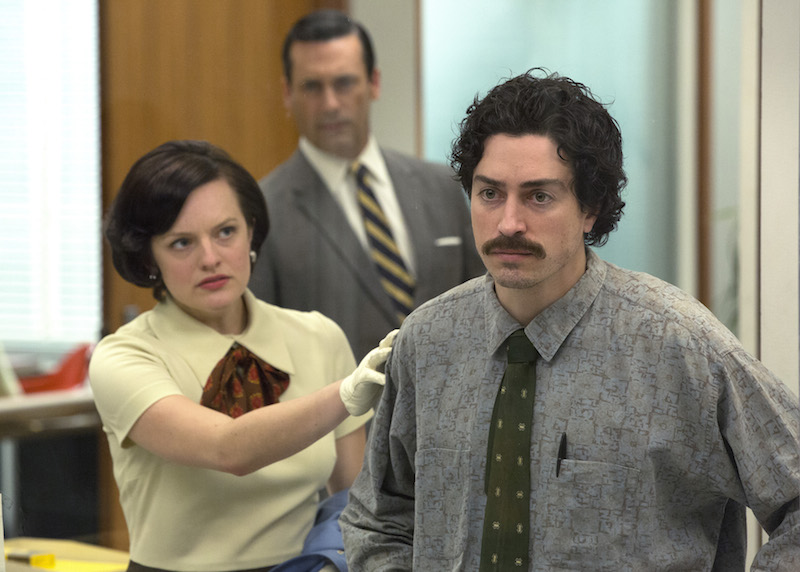 While
Weiner may utilize his Jewish identity to expound upon this aspiration for
whiteness and the anxiety that stems from oppression and alienation, the
influence Jewish identity holds in “Mad Men” is not all metaphorical. It has
also has a true grounding in the advertising world.

Although
Don is known to be ahead of the curve with his ideas, “Mad Men” presents us
with an innovative voice in Michael Ginsberg, the fast-talking and socially
inept copywriter Peggy reluctantly hires in Season 5. Although Ginsberg’s end on
the show is tragic, Weiner touched upon a Jewish sensibility, a sense of humor
and an attitude about advertising that may have contributed to his success — and
demise. When Don is rushing to come up with a concept for a Jaguar campaign,
Ginsberg swoops in with, “At last. Something beautiful you can truly own.” It’s
bold and punchy, reflective of a unique voice.

“I’m
super proud of [my Jewish identity], and I don’t want to wave a flag and call
attention to myself or get killed for it, but I’m very proud of it and I want
to show it especially because a lot of the story and what people love about
advertising was the slow integration [of Jews].” Weiner said. “Whatever you
want to say, there’s the Jewish sense of humor and a subversive attitude–from
the Volkswagen ad. You see these
people’s names and it’s a point of view. They have a sense of humor that’s
going to be making fun of advertising.”

Nevertheless,
it’s never that simple. Later in the discussion we saw a clip from “Far Away
Places” where Ginsberg reveals his upbringing to Peggy. Sure, he may be a
talented voice, and this Jewish sensibility plays its part, but the isolation
is still there. We learn that Ginsberg was born in a concentration camp and was
raised in a Swedish orphanage until he was five. With little to work with, he
concludes that he’s actually from Mars. It’s a touching scene and alludes to the
post-World War II woes Jews experienced in America. As Ginsberg’s speaks about
his alienation, we see his reflection through an office window (Weiner says this
was intentional and in the script).

Weiner
asserted, “I don’t generally like sweeping generalizations about the show, but
if you want to say it’s the story of how we all feel like outsiders — absolutely.”

He
then joked, “The only insider in this whole thing is Roger.”

READ MORE: ‘Mad Men’: How Megan Got Her Job And How Peggy Lost Hers, According to Matthew Weiner