Inside 'Inside Amy Schumer': They're Gonna Do 'Whatever the F***' They Want

Below, please find all the behind-the-scenes action from the Season 3 premiere of “Inside Amy Schumer,” your favorite over-the-top sketch show, as told to a rapt audience at a Tribeca Film Festival panel…

Comedy Central’s “Inside Amy Schumer” started Season 3 with a bang and a number of butts. The already-viral “Milk Milk Lemonade” music video finds Schumer rapping alongside Amber Rose and Method Man, who agreed to be in the video just because she asked. Method Man appears in Schumer’s new movie “Trainwreck,” but when she asked him to be on her show, she figured he’d say no. Instead, his answer was “sure, let me know the dates.” All that was left was to make the show’s pregnant producer ask him, kindly, “um, would you be able to say, ‘this is where my poop comes out?'”

As for Rose, she and Schumer have become friends. Or, as Schumer puts it,”“[Amber Rose] is in my clique.”

The video is clearly a parody of “Anaconda” and the recent wave of butt-centric songs and videos, especially in the way that “having a booty” was once a traditionally, even stereotypically, part of black culture that is now becoming mainstream, AKA popular with white people. Schumer joked that black guys have always been into her butt, or at least, they’ve always been comfortable admitting they were into her butt. Now everyone’s saying it. And it’s just the part of your body “where the poop comes out!”

There will be another music video this season, a boy band-style ode to girls who look prettier without makeup until the boys realize girls look prettier with makeup. The director on both of these videos edited The Baha Men’s “Who Let The Dogs Out,” and makes a brief cameo in the beginning.

Anyone who remembered the “Realistic Military Game” scene (the panel calls them scenes, not sketches) from last season probably wasn’t shocked to see a rape joke on “Inside Amy Schumer.” The writers are always on the lookout for ways to make their hot topic scenes “educational” and “informative” as well as funny. The joke is always about the perpetrators and the systems that enable them, not the victims. And no, Comedy Central doesn’t censor them, content-wise. As Schumer put it, “it’s Season 3, we’re gonna do whatever the fuck we want.”

Josh Charles, who played the coach in the scene and was also in the Sorkin parody “The Foodroom” (and actual Sorkin show “Sports Night“) is apparently a big fan of comedy. He reached out to the writers via Twitter and asked to be on the show. 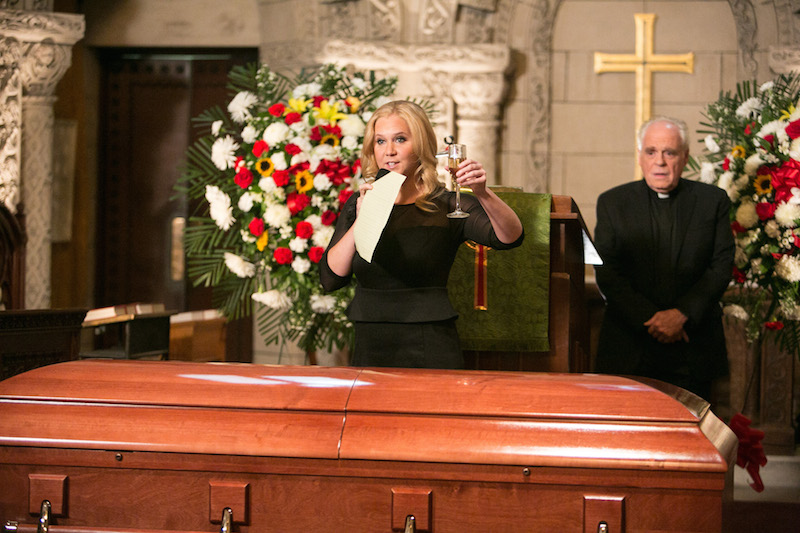 A highlight of the season premiere is Schumer’s frank and funny interview with actress, model and outspoken trans woman Bailey Jay. She and Schumer have been friends for a while, which lent the interview a warmth. But future guests won’t all be Amy’s pals. They include a pimp and a gay nonagenarian she met while drunk on a plane.

As for the woman-on-the-street segments, look out for the man who got drunk and bought himself a star online, who the writers and producers described as the saddest person they’d ever talked to. They felt so bad for him that they invited him to the wrap party, though he hasn’t RSVP’d. They also followed him on Twitter. “He had ten followers, now he has fifteen,” said a producer, “but one of them is Amy Schumer.”

A sketch directed by Nicole Holofcener! This was an idea the writers had been kicking around since Season 1, and “Sally Field Was Here” being carved into a wooden seat had always been integral to the joke — her career trajectory epitomizes the frustration of aging in Hollywood.

Originally, they were thinking of going in an older direction with women like Mia Farrow and Diane Keaton. “No idea why those two wouldn’t want to work together,” deadpanned Schumer. They finally shot it because Tina Fey, Julia Louis-Dreyfus and Patricia Arquette agreed to be in it, and it’s the only scene in the series to be shot in Los Angeles. Schumer’s favorite part of the day was setting Julia Louis-Dreyfus adrift in the Viking funeral, a concept apparently not everyone in the writer’s room was familiar with. For the record, Tina Fey came up with “white spiders” coming out of a man’s sexual organs. And Patricia Arquette, who is into crafting, insisted they make a birdhouse out of diaphragms. That birdhouse now lives in Schumer’s apartment.

Though not part of the premiere, everyone on the panel was so excited about it that they couldn’t stop spoiling it: An entire episode this season will be a shot-for-shot remake of “12 Angry Men,” in which an all-male jury (including Dennis Quaid, Vincent Kartheiser and more) debates the greatest question of our day: Is Amy Schumer hot? Stay tuned to find out.