Review: 'Inside Amy Schumer' Season 3 Knows What It Looks Like, Doesn't Care What You Think 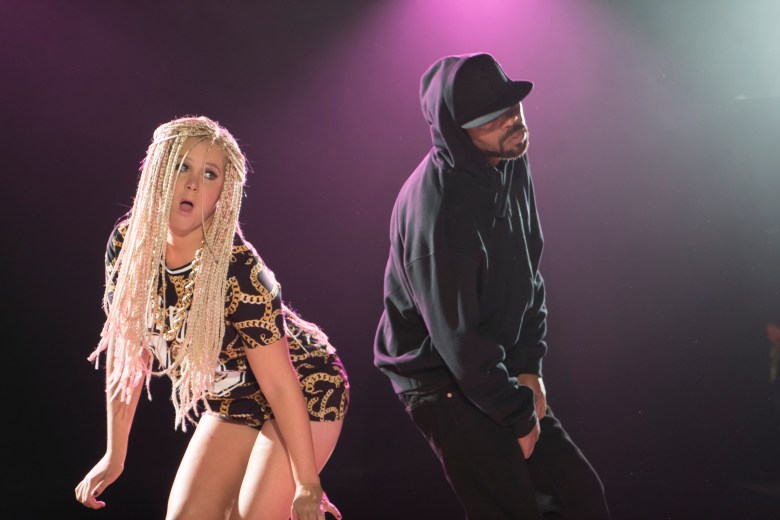 Like most working comedians today, you probably know Amy Schumer best in bits and pieces. You’ve seen clips of her stand-up or hosting awards shows. You’ve watched her rip Roseanne or Charlie Sheen apart during a Comedy Central roast. Maybe, you’ve seen one or two sketches from “Inside Amy Schumer,” posted online because that’s what’s done these days. But as with so many shows, you probably have never had time to sit down with a full episode of her Peabody Award-winning, just-renewed-for-a-fourth-season Comedy Central series.

It’s time to fix that.

Premiering tonight, the third season of “Inside Amy Schumer” features the eponymous star using her raunchy sense of humor to confront, primarily, issues of gender and sexuality, especially the concept of being a woman who’s ill-behaved, who doesn’t wear a size zero and who knows her way around an F-bomb — or 16,000. To watch “Inside Amy Schumer” is to see the world from a very, very specific perspective, and, thanks to that specificity, to find it very relatable.

In comparison to, say, “Key and Peele,” “Inside” is almost more of a variety half-hour than sketch comedy, especially thanks to both the man-on-the-street spots and an interview portion, “Amy Goes Deep,” that sits Amy down with an intriguing figure for a conversation as invested in facts as it is in laughs. (Schumer is actually a pretty solid interviewer. Where was the campaign for her to take over “The Daily Show”? There are certainly worse choices out there.)

The three episodes made available in the lead-up to this season are not top-to-bottom home runs. For example, a parody of the One Direction song “You Don’t Know You’re Beautiful” feels like a joke that expired years ago. But when it works, “Inside Amy Schumer” offers up an irresistible combination of balls and brains (depending on your comfort level with jokes about bodily fluids).

Certainly, this season features an equally addictive assortment of guest stars. Tonight, for example, features an all-star line-up that includes a jaw-dropping team-up of Tina Fey, Julia Louis-Dreyfus and Patricia Arquette in the episode’s titular sketch, “Last F**kable Day.” There’s also previous “Inside” guest star Josh Charles in a brilliant send-up of Indiewire favorite “Friday Night Lights.” To make a great parody of something that’s already great is one of the universe’s great challenges, and “Inside Amy Schumer” pulls it off with aplomb.

What makes “Inside Amy Schumer” so exciting as a property is the fact that its lack of strict formalism doesn’t mean it lacks cohesion. A sketch flows into stand-up flows into a comedy music video, but they’re all tied together, if not by theme, then by point-of-view. And then even this loose adherence to format can be abandoned entirely. Episode 3, “12 Angry Men Inside Amy Schumer,” is a powerhouse achievement you can count on us writing more about later, but for now just know that for an entire episode, the show breaks form in an exciting and unprecedentedly cinematic way.

And that’s part of what gives the show value as a whole, rather than just as one-off sketches you might catch on YouTube. Absorbed all at once, it’s easy to maybe think that Schumer and her writing staff are a little over-focused with issues like the objectification of beautiful women and the reverse treatment of the less beautiful or aging. But then you realize how little you’re used to hearing these issues raised by a comedy. Perhaps “Inside” is a bit obsessed with Amy Schumer’s looks, as a microcosm of how all women are judged, on some level, by their appearance. But hell, “Louie” is a bit obsessed with Louie CK’s penis. We all have our muses.

Schumer’s career may be about to explode in a big way, depending on the reception of her upcoming Judd Apatow-produced summer comedy “Trainwreck” (which after its SXSW premiere has a lot of positive buzz behind it). Given that, Comedy Central locking her in for a fourth season on the eve of the third season’s premiere makes a ton of sense, but while “Trainwreck” is a custom-built star vehicle, it might be “Inside Amy Schumer” which is better equipped to capture Schumer’s essense. The show is such a refreshing example of the power of not giving a f***, even if basic cable standards and practices bleep every swear word. Schumer is an inspiration not because she preaches, but because she leads by example.

“Inside Amy Schumer” premieres tonight at 10:30pm on Comedy Central.