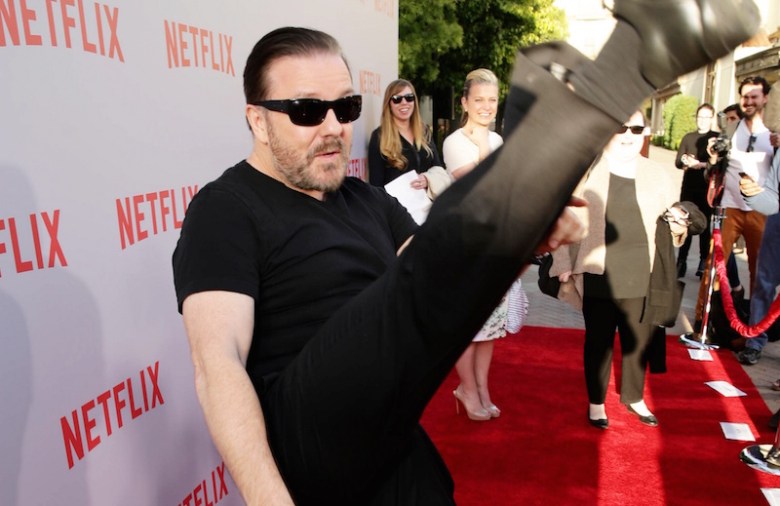 When Ricky Gervais walked onto the stage carrying a beer — which is almost expected of him after hosting the Golden Globes three times with a drink in hand  — it was clear this wasn’t going to be just another ego-stroking Q&A. Sitting before a large crowd at Paramount Studios in Hollywood , Ricky Gervais took questions first from Mitch Hurwitz, the creator of “Arrested Development,” for nearly an hour before kindly responding to more from members of the TV Academy.

Among the many topics covered in the offbeat conversation, the discussion soon worked its way over to recent events in “offensive” comedy. It started when Hurwitz made a comment about how there’s more policing of jokes now than ever before, ending with “you can’t say anthing.”

“Well, you can and you should,” Gervais said. “I think people gotta know that just because you’re offended, doesn’t mean you’re right. Everything you say will offend someone somewhere. Some people are offended by equality. Some people are offended by gay marriage, mixed marriage. […] You shouldn’t go out to be offensive because it’s churlish and it’s pointless, but this is the problem with jokes. The offense comes when people mistake the target of the joke with the subject of the joke. ‘Taboo’ becomes that you shouldn’t talk about race. Well, it depends on what the joke is. It depends on what the target is.”

READ MORE: What’s the Worst Thing About Trevor Noah’s Pre-‘Daily Show’ Tweeting: The Laziness or the Lack of Compassion?

Hurwitz then mentioned the recent discussion over Sean Penn’s joke at this year’s Academy Awards. While onstage to present Best Picture to Alejandro Gonzalez Inarritu, Penn joked, “Who gave this son of a bitch a green card?” Despite the filmmaker saying he found it “hilarious,” some critics took offense to Penn’s comment.

“Honestly, it’s always someone being offended on someone else’s behalf,” Gervais said. “It always is. […] ‘You shouldn’t say that because of them.’ ‘Well, let’s ask them.’ ‘I’m fine with it.’ There ya go.” 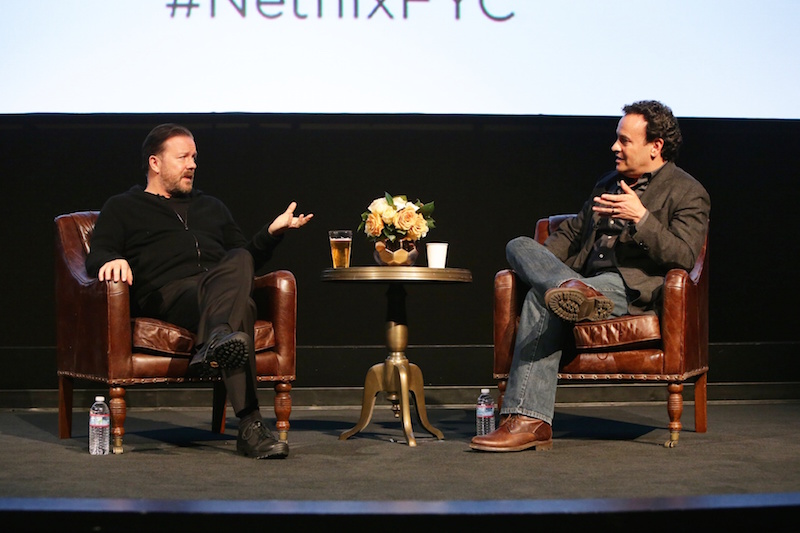 Addressing the elephant in the room up to that point, Hurwitz brought up Trevor Noah, the future host of “The Daily Show” who landed in hot water recently for some of his old, unsettling tweets.

Gervais stuttered a bit at first, but then said, “They’re a bit old, a bit hack and clearly he wasn’t at the top of his game. But it’s this thing that people can pick up that you said five years ago on social media. I feel sorry for teenagers growing up with social media because it’s devastating, the things you do [at that age]. It shouldn’t count [until you reach a certain age]. I said this thing once, ‘How old are you?’ ’15.’ ‘It doesn’t count.'”

Gervais and Hurwitz were on hand to promote the final “season” of “Derek,” Gervais’ Netflix series (at least here in the U.S.) about a nursing home assistant who leads a simple life with his friends and coworkers in the facility. Gervais was nominated for an Emmy as Outstanding Lead Actor in a Comedy last year, and also snagged a nod at this year’s Golden Globes. Since the last entry of his series is only an hour long, Gervais and his series will now be competing in the Limited Series/TV Movie category. 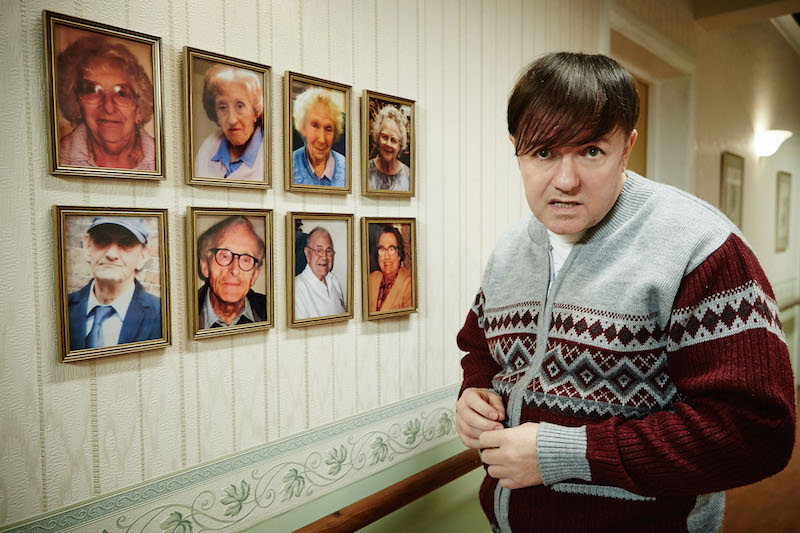 The two comedy titans also took some time to praise “Derek,” even if the conversation often veered away from the showcased comedy. While introducing Gervais, Hurwitz compared him to Charlie Chaplin and called him a “genius.” Gervais later said, “If I wasn’t being filmed and people didn’t know who I was, I’d be Derek for the rest of my life. It’s nearly spiritual. It’s so lovely to be this positive guy who just says what he thinks.”

As for the “real” Ricky Gervais, the comedian argues most people haven’t seen his true colors.

“People do think of me as this shocking comedian who stood up at the Golden Globes and insulted the most privileged people on the planet,” Gervais said. “They know I’m not David Brent, they know I’m not Andy Millman, they know I’m not Derek, but they should know that I’m not that guy either. I’m not the guy I am in stand-up. My stand-up is as much as a personality as any of my characters are. I’m playing a brash, arrogant guy who comes down on the wrong side and says the wrong things. It’s just more subtle than some comedy characters.”

Despite his visible anger regarding intolerance for comedy, marriage and animals — Gervais is a devout animal lover — the actor, writer and director of “Derek” later said he thought of himself as somewhat of an optimist.

“I think I am, secretly. I am,” Gervais said. “I sort of have faith in humanity. I think it all will be okay, even though it’s a struggle to get through it. [But] Twitter has shown me that mankind should be wiped out.”