There Are Two New Russell Brand Documentaries, But Only One of Them is Worth Seeing 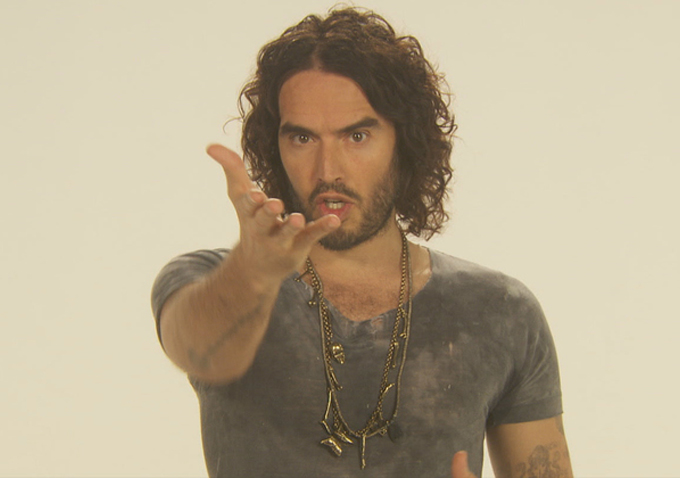 British standup comedian and actor Russell Brand’s radical transformation into a rambunctious ideologue assailing the persecution of the lower classes has baffled his fellow citizens while going largely ignored in America, but that’s hardly slowed down his passionate crusade.

Brand’s enviable cause received fascinating context in Ondi Timoner’s recent “Brand: A Second Coming,” which tracked its subject from his humble beginnings through various struggles with drugs, women and fame before the most recent and complicated phase of his public life. While the star turned his back on Timoner’s project, citing the sensitivities associated with confronting his troubled past, it turns out he had an authorized encapsulation of his current state in the pipeline.

“The Emperor’s New Clothes,” which is credited as being “made by” Brand and prolific British director Michael Winterbottom, focuses on the same target as Winterbottom’s 2010 documentary “The Shock Doctrine” — namely, free market capitalism and the elite few who profit from it. But Brand’s conviction about the corrosive effects of self-interested rich people who don’t pay their taxes brings nothing new to the table, and his meandering, intermittently funny overview of the topic hardly amounts to more than a prankish civics lesson.

Though Brand makes admirable attempts to showcase the suffering of impoverished households across the U.K., striking an often powerful contrast between struggling families and wealthy bankers, his pedagogical rantings ring hollow; even as he routinely appears onscreen to make his points, he avoids personalizing his relationship to them. That challenge is addressed in “A Second Coming” when he talks about his unnerving experience following a visit to a developing country when he joined then-wife Katy Perry at a luxurious event and felt troubled by the disconnect.

In “The Emperor’s New Clothes,” Brand offers no such context. Instead, he and Winterbottom fashion a narrative around shots of the comedian facing the camera against a white backdrop (and sometimes bathed in distracting neon filters) as he delivers basic points about avaricious executives funneling their money to offshore accounts while impoverished citizens struggle to survive.

His rants are complimented by more inspired footage of Brand venturing out to workplaces of his targets, echoing the gimmick at the center of Michael Moore’s “Roger & Me,” in ill-fated attempts to confront them. While hardly substantial enough to carry the movie, these confrontational antics actually serve as the movie’s bright spots. As much as he resists his earlier classification, Brand works best when he’s in entertainment mode.

Cruising past hulking skyscrapers with a billboard labeled “Stop a Banker” — a sly reference to British authorities’ “Stop a Looter” campaign in the wake of 2011 protests — in search of billionaire CEO’s, Brand makes for a likable troublemaker no matter the fiery nature of his message. Like an uninvited court jester begging for entrance at the gates of despotic rulers, he’s irresistibly committed to his act. (At one point, he even jumps the fence at the home of Daily Mail owner Lord Rothmere, brandishing signs assailing his tax-dodging tendencies.)

The punk rock intensity of Brand’s mission comes through in his behavior rather than the aimless (and rather basic) agitprop framing it. Elsewhere, in another highlight, he illustrates wealth disparity with roomful of children wearing different amounts of gold around their necks. There’s a better, more devious and pointed movie lurking in these scenes.

Unfortunately, “The Emperor’s New Clothes” routinely goes back to Brand’s diatribes on the basic evils of free market capitalism, with large font emphasizing each point. By simply regurgitating the rage of the Occupy Wall Street movement, his routine quickly grows tiresome — which is hardly the case in the vibrant “Brand: A Second Coming” (still inexplicably sans distribution weeks after its high profile SXSW Film Festival premiere).

By showcasing the process through which he turned his back on traditional show business success in favor of more altruistic goals, Timoner’s documentary is ultimately a better conduit for Brand’s intentions. Working on his own terms, however, Brand can only push the same buttons time and again.

“The Emperor’s New Clothes” premiered this week at the Tribeca Film Festival. It is currently seeking U.S. distribution.

This Article is related to: Reviews and tagged Reviews, Russell Brand, The Emperor’s New Clothes