Cannes Review: 'Mediterranea' is the Most Timely Movie at This Year's Cannes Film Festival 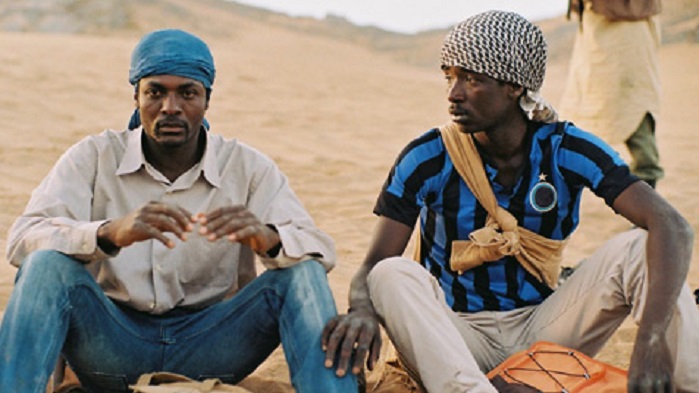 While the migrant crisis plaguing Europe may dominate headlines, it hardly personalizes the details of the situation: thousands of impoverished Europeans struggling to advance toward better lives across the sea, surviving dangerous ocean conditions and dicey career prospects even if they do make it to the other side. American director Jonas Carpignano’s tender, devastating first feature “Mediterranea” digs into that perspective with moving results, as it follows a pair of young adult friends on their trepidatious journey from Burkina Faso to Italy, where they wind up at odds with the dream life they envisioned.

No other movie at this year’s Cannes Film Festival hits such a profoundly topical note, though Carpignano’s story — which unfolds with a mixture of French and Italian — never overstates its representational value. Instead, it renders a global crisis in strikingly intimate terms.

As a snapshot of experiences, “Mediterranea” largely operates in a minor key, and at times plays more like a collage of the two struggling men’s plight rather than a cogent narrative. Nevertheless, bolstered by Carpignano’s command over the naturalistic environment and the main duo’s utterly believable performances, “Mediterranea” builds an intriguing scenario that holds tight early on due to the stakes at hand. As the two men plot a journey from an illegal boat to an entirely new life in the Italian city, they cope with a daunting set of priorities: On the one hand, Aviya (Koudous Seihon) faces the prospects of abandoning his wife and young daughter; Abas (Alassane Sy), on the other hand, suffers from an irascible personality that sets the stage for his rebellious tendencies once they arrive.

Before it settles into the rather leisurely rhythms of their life together in Italy, “Mediterranea” takes on the makings of a tense thriller, as the men journey out to a tense desert meeting with their presumed transporters, only to learn that one of the illegal crewmembers must volunteer to run the ship. Their eventual transportation experience, glimpsed in terrifying shots of a silhouetted vessel plunging through violent waves against a stormy night sky, effectively conveys their transition into a whole new world of mysterious possibilities.

Carpignano and cinematographer Wyatt Garfield capture these moments, like much of the movie, in tense closeups that barely hint at the broader socio-political context. For the most part, “Mediterranea” sticks close to the uneasy experiences of its two hapless protagonists, who wind up briefly incarcerated by Italian authorities before drifting through a series of odd jobs. On more than one occasion, as they cope with mean-spirited employers and the racism simmering just beneath the surface of Italian society, Abas’ touchy attitude threatens to ruin their progress. But Carpignano positions an even more intriguing dilemma for Aviya, a good-natured family man who wants to empathize with its frustrated pal but feels an allegiance to bigger priorities. Still, when he implores Abas to “just give it some time,” it sounds more like wishful thinking than anything else.

The movie blends a neorealist shooting style with nuanced performances that transforms the challenges endured by the two men into an intensely involving process. Though it meanders somewhat in its middle passage, with Aviya befriending a local family and developing a curious bond with their daughter and Abas constantly trying to better their surroundings, that slow-burn atmosphere draws out the perception of the duo hovering just on the cusp of a coveted existence.

Carpignano delivers a compelling payoff with the movie’s closing act, as Abas gets drawn into local protests and Ayiva gets cold feet about joining in. The violent showdown finds the men swept up in a crowd with alternately thrilling and horrific possibilities, converting the sheer range of unknown variables governing their existence at each moment. The understated score, by “Beasts of the Souther Wild” director Benh Zeitlin and composer Dan Romer, furthers that nuanced approach.

While the director may not have anticipated the extent to which the migrant crisis would become an international talking point by now, “Mediterranea” does its part to ground the movie in the present. One affecting scene finds Aviya calling his wife and daughter via Skype and watching them dance to a Rihanna song before breaking down in tears. Despite the ridiculous cue for such waterworks, the moment has a stirring undertone that illustrates the extent that the men have been deprived of life’s smaller pleasures.

In their battle to survive, their future becomes increasingly uncertain, and “Mediterranea” eloquently wonders whether the forces dictating their struggle require a fresh strategy — or at least a second look. With its intensely personal gaze, Carpignano achieves just that.

“Mediterranea” premiered this week at the Cannes Film Festival. It is currently seeking U.S. distribution.