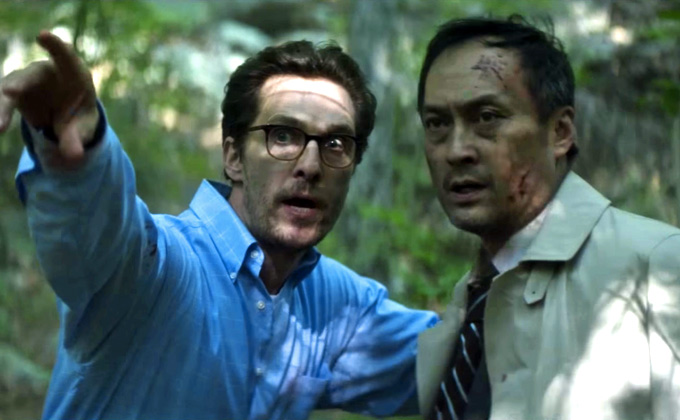 Gus Van Sant is the rare formalist who has been known to depart into more conventional, at times mawkish work with varied outcomes, from the now-classic “Good Will Hunting” and equally compelling “Milk” to the middling “Restless.” None of these forays, however, lead to such painfully misguided results as “The Sea of Trees,” a hackneyed story of one man’s journey toward spiritual uplift following the abrupt death of his wife (Naomi Watts). Not even Matthew McConaughey can sustain the mushy, amateurish story, which digs itself a deeper hole as it moves along. The established talents of both director and star only serve to magnify the many wrong moves that this stunning misfire takes.

Fortunately, “Sea of Trees” at least maintains the appearance of a better movie, with polished visuals that seem fitting for the largely outdoors setting. Cinematographer Kasper Tuxen does a fine job complimenting the Japanese forest scenery where Arthur Brennan (McConaughey) travels in the movie’s opening with the initial plan of committing suicide. His destination is Aokigahara, aka Suicide Forest, a real life stretch of nature where countless people kill themselves each year.

During a mostly wordless prologue in which Arthur finds an empty area and gets ready to overdose, “Sea of Trees” hints at a more profound look at despair and mortality not unlike the premise of Ramin Bahrani’s first-rate “Goodbye Solo,” another tale of a man eager to kill himself in the woods. But it doesn’t take long for “Sea of Trees” to unravel the appeal of its introductory moments, as Arthur gets interrupted by the arrival of another suicide-bound traveler (Ken Watanabe) stumbling through the woods. Unable to find the trail, the two men wind up heading through the dense region together, talking through their issues late into the night.

In the meantime, “Sea of Trees” echoes the structure of last year’s “Wild” with a series of flashbacks explaining how its melancholic protagonist decided to abandon civilization in the first place. The answer is a series of scenes depicting his troubled marriage, which goes from unsteady to somber when Watts’ character finds out she has a tumor. The prognosis isn’t good, so the tears flow. Back in the forest, Arthur recalls the situation to his new companion, and as they bat around their emotions it’s no great surprise that he starts to rethink his morbid plan.

Time after time, “Sea of Trees” lingers in blatant, unimaginative sentimentality. As the men sit around a fire, Van Sant’s camera sits inches from McConaughey’s face as he unleashes a monologue about all of his stream of regrets, most of which were already implied by the flashback scenes preceding his confession. After a while, the plot for “Sea of Trees” runs in circles, not unlike its lost duo.

It’s hard to tell how much credit Van Sant can take for so many missteps when the movie’s chief problem lies with Chris Sparling’s screenplay, which never strays far from a blunt approach. Sparling has found previous (and deserving) acclaim in the genre space with his first produced script, the taut thriller “Buried,” which exclusively took place within the confines of a coffin. That was a gimmicky project that worked fine within the constraints of the premise. But there’s no excuse for the terrible narrative stunts here, from the ultra-trite contrivance of a car crash bursting into frame after over a minute of obvious build-up to a third act reveal that takes the material into laughable supernatural territory.

There may be a meaningful story surrounding Arthur’s wake-up call to the beauty of life embedded in the underlying scenario, but Sparling’s screenplay can’t find it, instead focusing on the punishingly obvious symbolism with lines like “there is no right trail,” not to mention the questionable decision of selecting a magical Asian character to materialize out of nowhere so that the sad white man can rediscover his passion for life. McConaughey, meanwhile, tones down everything distinctive about his performance style and winds up utterly unmemorable.

The most confounding element of “Sea of Trees” is that Van Sant has already made a far better movie about two men struggling to live another day in the middle of nowhere — his minimalist 2002 drama “Gerry,” in which compelling images imply layers of meaning each step of the way. If movies could talk, that one would tell this one to wise up.

“Sea of Trees” premieres this week at the Cannes Film Festival. Lionsgate and Roadside Attractions will release it later this year.