Daily Reads: What the Marvel-Industrial Complex Says About American Culture, Do's and Don'ts for 'Mad Men's Ending, and More 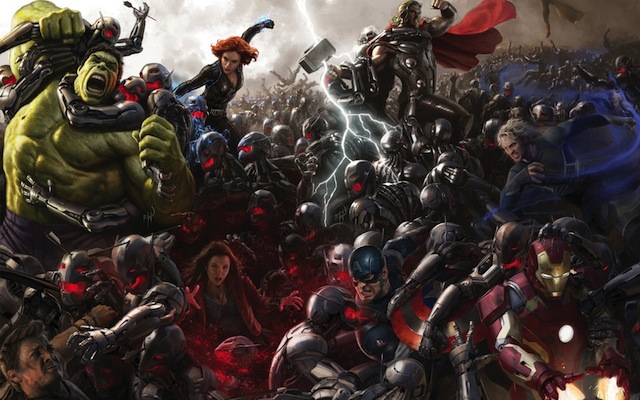 1. The Marvel-Industrial Complex and What It Says About American Culture. Now that Marvel has successfully taken over the entire film industry, it’s time to ask the hard questions, like how and why we decided to make superhero movies the most popular in all the land? Movie Mezzanine’s James Rocchi asks theses questions and more as he tackles the Marvel-Industrial Complex.

The point of Marvel’s cloak-and-dagger skullduggery with S.H.I.E.L.D. is a familiar line of argument and entertainment we’ve become perilously used to: the plot where an unscrupulous, power-hungry arm of the intelligence apparatus is thwarted in their plans…by a scrupulous, public-service-minded arm of the intelligence apparatus. Again, the status quo remains intact. Even Ultron’s put-down in “Avengers 2″ — “You Avengers want to save the world, but you don’t want to change it” — gets neutered by the follow-through: Ultron’s idea of change is killing humanity, and so the status quo of mere survival is ringingly endorsed above annihilation — which is really not that much of a choice. I do not expect $100 million movies to constantly, deliberately, and explicitly speak to the real world; at the same time, I do not want $100 million movies that constantly, deliberately, and explicitly decide to have nothing to do with the real world whatsoever. You can make the argument, as many have, that the Marvel films, with their emphasis on urban destruction, are just the result of us coughing up some psychic equivalent of a hairball after 9/11 — but if that were the case, shouldn’t the aftermath of destruction be more important than the destruction itself? Where is the catharsis in seeing the endless repetition of destroyed urban areas with no aim in sight beyond spectacle?

2. 19 Things We Learned About Orson Welles’ Last Unfinished Film. Orson Welles turned 100 yesterday and just in time for his birthday, Josh Karp has released a new book called “Orson Welles’s Last Movie” following the ill-fated production of “The Other Side of the Wind.” Vulture’s Bilge Ebiri catalogues the things we learn from Karp’s new book.

Many of the characters were based on real-life people. Welles cast his protégé Peter Bogdanovich as a “smarmy” critic modeled after Rex Reed and Charles Higham, while the critic Joseph McBride was cast as a hyperintellectual film writer. Welles cast Susan Strasberg, daughter of the infamous acting teacher Lee Strasberg, as “the bitchy, pretentious critic Juliette Riche,” who was modeled after Pauline Kael, who had just published the controversial “Citizen Kane Book,” challenging Welles’ role in the authorship of his most beloved film. A character named “The Baron” was based on John Houseman, Welles’ longtime Mercury Theater partner and producer on “Citizen Kane.” Another character was modeled after the right-wing, man’s-man action director John Milius. Yet another was based on then-Paramount executive Robert Evans, producer of “Chinatown.”

3. What “Mad Men” Should and Shouldn’t Do Before It Ends. There are only two more episodes left of “Mad Men” and people are naturally speculating wildly about its conclusion. The Huffington Post’s Maureen Ryan gives a list of “signposts” she wishes the series hits before it shuffles off this mortal coil.

Don and Sally. My fondest wish before the series ends is to see that Don is in a reasonably good place with his daughter, Sally (and also with Peggy Olson). Sally finding out who her dad really is — a penniless orphan who was raised in a brothel, an adulterer and a sometimes irresponsible parent — has been a difficult process, to put it mildly. But as Don has shed the carefully cultivated facade he showed the world in Season 1, he has also become more vulnerable and more able to connect with others, especially his smart, perceptive daughter. I don’t think the show has to end with Don holding down a cushy, cool job or cementing a new romantic attachment. Don tends to move through jobs and wives with restless dissatisfaction; that’s kind of his thing. I don’t care if, at the end, Don is living in a shabby studio apartment and eating off a hot plate, as long as we get some scenes in which Jon Hamm and Kieran Shipka impress us yet again by effortlessly conveying the complex layers of love, affection and irritation that are the hallmarks the relationship between Don and Sally.

4. Elevating the Art of the Blooper Reel. Sofia Vergara and Reese Witherspoon’s new buddy movie “Hot Pursuit” enters theaters tomorrow. In light of its release and its impending blooper reel, The New York Times’ Robert Ito explores the history and art of the “blooper” and what it means to showcase your mistakes.

In the 1930s and ’40s, Warner Bros. made blooper reels featuring James Cagney, Bette Davis and others to entertain the attendees at the studio’s annual dinner. Those were strictly inside affairs. Now that the mistakes are just as visible as the movies they appear in, actors routinely take measures to protect themselves from the worst of them. “For mid- to high-level actors, there’s usually a provision that says the artist shall have the right to preapprove in writing any bloopers or outtakes or DVD extras,” Richard Genow, who practices entertainment law in Beverly Hills, said. “We always try to get that protection where available.” Even so, a wise director would probably try to avoid a dust-up with cast members regardless of what’s in their contracts. “When we first did the blooper reel and Sofia’s dress comes all the way down and her underwear comes out, I put a little blur on the picture before I had gotten her approval,” Ms. [Anne] Fletcher said.

5. Amy Schumer Puts Her Own Looks On Trial. Last Tuesday, “Inside Amy Schumer” aired a hyper-specific parody of “12 Angry Men” with a jury deciding whether or not Amy Schumer is “hot enough” for television. NPR’s Linda Holmes analyzes the brilliance of putting Schumer’s looks on trial.

The debate over Schumer’s looks certainly hits expected notes: the 11 men initially trying to vote her off of television say she’s too fat, not pretty enough, too awkward, and most of all not capable of turning them on. This theme returns in the funniest sight gag in the piece, which twists the original film’s unexpected switchblade sequence in a manner I can’t describe to you in detail here, but it’s a good one. The detail in the critique embedded in Schumer’s satire grows. The men talk about how they can appreciate women who are accessible, who would clearly be grateful for their attention — you know, regular women like Rosario Dawson or Jennifer Aniston. They complain that comedy has been taken over by ugly women like Schumer and Lena Dunham and wonder where the Megan Fox and Kate Upton talk shows are. They speculate with disgust that Schumer probably can’t get a man and that she probably sleeps around. A man who professes attraction to the “wrong” kind of woman is himself shamed for it.

Tweet(s) of the Day: