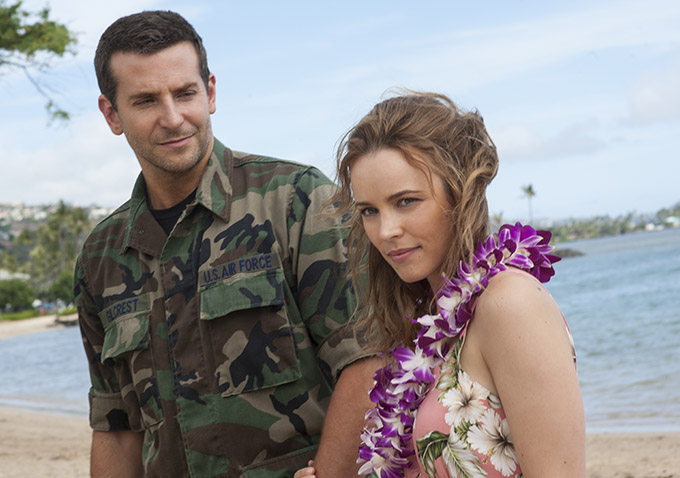 Cameron Crowe used to make good movies. His tender character studies took life’s fleeting, seemingly insignificant moments and made them profound — not to mention iconic. Let us count the ways: John Cusack hoisting the boombox above his head to the tune of “In Your Eyes”; the flurry of quotable lines from “Jerry Maguire” that have entered pop culture lexicon (“Show me the money,” “You complete me,” “You had me at hello”); the nostalgia for the halcyon days of rock ‘n’ roll in “Almost Famous,” arguably his best work.

Fourteen years later comes the achingly bad “Aloha,” in which Crowe seems to have expunged all evidence of his distinctive filmmaking talents. Equally hobbled by an amateurish script and vaguely defined characters, the movie’s long list of mediocrities have an anonymous quality, as though the director has been completely reborn as a hack.
The story begins with former air force officer Brian Gilcrest (Bradley Cooper, smiling his way through a shell of a role) telling us, via voiceover, that he’s always loved space, but a horrible accident left him with 18 broken bones and a ruined career. As he puts it, in one of many forehead-slapping moments, he’s “waiting for scraps, like a hungry cat outside a seafood restaurant dumpster.”

Now Brian’s a defense contractor, or something, working for Carson Welch (Bill Murray, who looks unhappy to be here). Brian arrives in Hawaii to oversee the launch of a new satellite, or something, which displeases the native Hawaiians — who are, rather simplistically, still upset that America commandeered their home and turned it into a red-white-and-blue tourist hellhole. Some people can really hold a grudge.

Escorting/babysitting Brian is Captain Allison Ng (Emma Stone), a quarter Hawaiian and apparently quite gullible, as she falls in love with Brian before she’s even given a line of dialogue. (Must be his blue eyes.) Complicating matters, Brian’s ex-girlfriend Tracy (Rachel McAdams) lives and works on the island, and she’s having problems with her distant husband (John Krasinski). But she’s still in love with Brian AFTER 13 years, two children, and one marriage later, because who wouldn’t be in love with Bradley Cooper? The first thing Brian tells her is that she’s still gorgeous, and their conversations don’t really evolve beyond that. Though Crowe has simplified his female protagonists before (see “Elizabethtown”), “Aloha” finds that tendency at an all-time low.

Devoid of both romance and humor, “Aloha” belies the appeal of its purported genre, most significantly because its usually talented cast has no visible recourse. Stone, Cooper and McAdams spend the movie tethered to their hackneyed rom com dialogue. Stone in particular seems to be privy to an inside joke the entire movie, while Cooper looks as though he’s been trapped by this misguided project and forced to smile at gunpoint.

“Aloha” has already spurred criticism for its allegedly white-washed depiction of Hawaii, but that’s oddly the one area in which Crowe’s doesn’t totally fall short: The homogeneity of modern Hawaii is the whole point, though it’s delivered in fairly blunt terms. With the advent of the weapons satellite launch approaching, Brian is tasked with cajoling the blessing of the natives in exchange for giving them back two of the mountains the Americans stole. Brian smiles and agrees and hugs it out, only to chastise their beliefs as soon as he drives away.

The ethnic disconnect resurfaces during the obligatory falling-out scene that must occur between the man and woman in the midst of their courtship, when Brian insults Allison’s Hawaiian heritage one too many times, and she tells Brian he’s cynical and mean. (Don’t worry, they work it out.)
Other potentially compelling themes include American imperialism, post-traumatic stress, depression, suicide, existentialism, and the militarization of the sky, all implied by way of Cooper’s backstory. But they’re dangled throughout the plot like signifiers for a movie that Crowe never actually wrote. 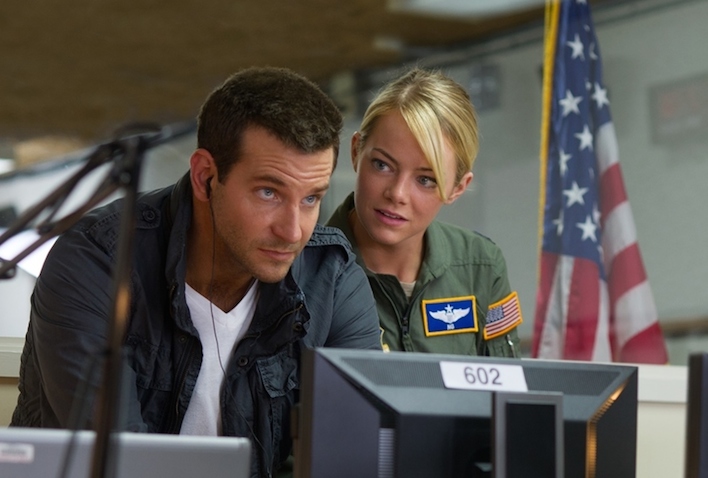 Worth mentioning: Alec Baldwin lands a fun, if out of place, scene late in the story that finds the actor shouting insults that could very well operate as meta-musings on the movie’s many shortcomings. He calls out Cooper’s perpetual two-day stubble, the complete lack of logic with which his character makes decisions, and even lands a few measured jabs at the American military. As usual, Baldwin’s delivery is sharp and keen and fettered by so much anger it makes you wish he were still a prominent figure in contemporary cinema.

Another standout moment takes place in complete silence at the very end of the movie, with Crowe channeling Woody Allen circa “Annie Hall” and using subtitles to narrate the unspoken thoughts of two characters conversing without words. The two-minute scene is like a brief flash of a filmmaker worth rooting for. After so much horrific dialogue, it’s a welcome relief when Crowe lets his characters shut up.